A quantitative approach to studying the archaeological past would be most interested in
building and testing hypotheses by collecting, classifying, and measuring the remains of past cultures
Diversity defined anthropologically
focuses on multiplicity and variety
Contemporary cultural anthropologists still rank societies along an evolutionary scale from “primitive” to “advanced.”
False
The defining feature of historical particularism is
individual societies develop particular cultural traits and undergo a unique process of change
The subfield of anthropology that studies the material remains of past cultures, often focusing on the rise of cities, is called
archaeology
The subfield of anthropology that studies language use is called
linguistic anthropology
Culture is
learned and shared
Qualitative methods often use the researchers themselves as the research instrument
True
The primary ethical responsibility of anthropologists is to
the people or species they study
The most enduring and ritualized aspects of culture are referred to as
traditions
Who was responsible for the theory of functionalism?
Bronislaw Malinowski
A qualitative approach to studying social life in your university would emphasize all of the following except
the construction of statistical models to explain activities in the community
Even though anthropologists use parts of the scientific method, some don’t see what they do as science because
the complexity of social behavior prevents any completely objective analysis of human culture
he process of learning culture from a very young age is called
enculturation
The moral and intellectual principle that one should withhold judgment about seemingly strange or exotic beliefs and practices is
cultural relativism
Historical archaeologists excavate sites where written historical documentation exists that provides an accurate description of the way the people actually lived.

Get a verified writer to help you with Anthropology 1

Get a verified writer to help you with Anthropology 1 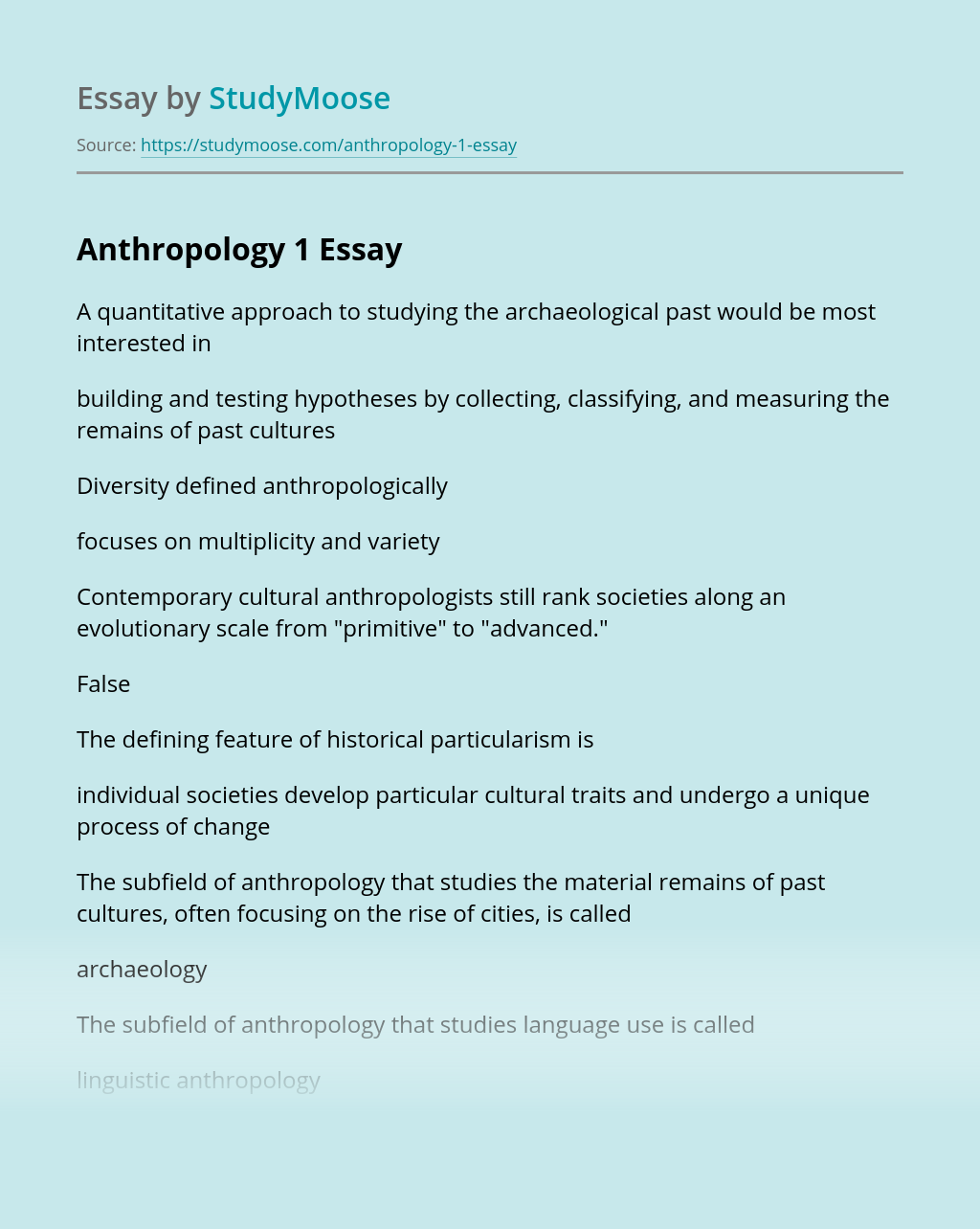 Grice’s Maxims have been criticised for being too Anglo-centric. Michael Clyne proposes revisions to the four maxims in his 1994 book Intercultural Communication at Work. Do Clyne’s revisions of this model go far enough in universally accounting for intercultural conversation? Why or why not? Grice’s General Cooperative Principle has been under continuous debate for the...

1. Some people accuse sociologists of observing conditions that are obvious. How does looking at sociology as “making the familiar strange” help counter this claim? How does sociology differ from simple commonsense reasoning? Sample answer: Sociologists may appear to study conditions that are obvious, but by making the familiar strange, they are able to move...

Abstract: The process of creating and sharing information with one another is called communication. The world is becoming a small-intersected community for the rapid changes in technology, expansion of multinational business or activities, transportation and immigration. The sustainability of global economy largely depends on the multinational business or other activities. Therefore, it is essential to...

The aftermath of Globalization leaves the anthropological-cultural world not merely in pieces, as one of the most accepted anthropological analysts of the time, Clifford Geertz, postulates, but in dust: A seemingly atomized, incoherent mesh of individuals, who can’t be attributed to a specific ethnic background anymore, and who are barely representative members of the nation-states...

Jeffrey C. Alexander works in the areas of theory, culture, and politics.  He is a modern sociologist. One of the most significant theorist of sociology in the 20th century. He published a variety of papers and books. His papers appear not only in particulary sociological or scientific journals. Prof. Alexander also reviews the current events...

Strictly speaking, medical anthropology is an applied field within anthropology. False Fortunately for applied anthropologists eager to do effective international work, all governments are genuinely and realistically committed to improving the lives of their citizens. False Which of the following is true about medical anthropology? This growing field considers the biocultural context and implications of...