In today’s society, a lot of people tend to take for granted what they have. Every once and a while, something drastic will ensue them, and that’s when they finally grasp what’s been right in front of them the whole time. In many different societies, for example the societies in The Hunger Games, and Anthem, the individuals that are living there are forced to listen to the ruler, or rulers, do not have an opinion in some of the choices that are made for them, and are also forced to accept the rule of selflessness.

Don't use plagiarized sources. Get your custom essay on
“ Anthem vs. Hunger Games ”
Get custom paper
NEW! smart matching with writer

Based on the themes of the Power of Knowledge, the Image of Self, and the Consequences of Free Will, the novella, Anthem, and the film, The Hunger Games express similarities and differences regarding the dangers of a Totalitarian government and its effect on its citizens in order to teach the reader to be blessed that they have a democracy and that the individuals of the United States have it really easy compared to other countries, and even societies in books or movies.

The Power of Knowledge is the result of having or not having knowledge. Being knowledgeable is not just one quality, but is many and a process of learning, experiencing, knowing and understanding. In the book Anthem Equality 7-2521states, “But we must never speak of the times before the Great Rebirth, else we are sentenced to three years in the Palace of Corrective Detention” (Rand 19). This quote from Anthem is an important example of the Power of Knowledge because what Equality is saying is that every person in his town has the knowledge of what happened before the Great Rebirth, they just choose not to bring it up because they are petrified of what their punishments will be.

However, an example of the Power of Knowledge from The Hunger Games is when Katniss recognizes the weakness of Seneca Crane, which is not having a winner of this year’s game, and uses that to her best advantage to force Seneca to let both her and Peeta win. This is important because if Katniss had not realized that doing so was his weakness, she and Peeta would have both had to kill themselves because they did not want to live without each other. In conclusion to these two different pieces of evidence, they are also able to be compared by noticing the facts that if both these characters did not take into account the opinions or beliefs of others, there would never be a way to be different, or a way out.

Image of self is the way one views his or herself, the ability to know our own flaws, strengths, bad habits and limits. When life starts to get rigid, most people lose hope in themselves because they feel as if they are not sturdy enough to stand anymore. In a lot of books, or even movies, this is a major problem that most characters face. In this case, from Anthem, the teachers always pointed out the flaws in Equality 7-2521, “There is evil in your bones, Equality 7-2521, for your body has grown beyond the bodies of your brothers” (18). This quote would be essential to the topic of Image of Self, because Equality already knew that he had all these “different” qualities, and knew that he was diverse from his brothers, yet he tried to remain the same by ignoring them.

However in The Hunger Games, Katniss only sees the flaws that are in her, and chooses to ignore the compliments that everyone is saying to her. When life puts individuals in the situation that Katniss and Peeta are in in the film, it is important to deposit all the negatives away and to only focus on the positives, no matter how hard they may be to see. This is a contrast between the novella and the film because in Anthem Equality knows that he is different, but just ignores the fact that he can do nothing about it, but in The Hunger Games, Katniss does not let anyone try to make her better because she believes she will never be right, or in a way better than the other characters. Although the quotes are contrasting, the similarity in them is the fact that Equality and Katniss both know they are different than the rest, yet overcome them in some sort of way.

The last theme being focused on is Consequences of Free Will. Consequences of Free Will means a person innate ability to make decisions with his or herself. I n a dictatorship, or the governments in Anthem and The Hunger Games, individuals are owned by the group, and they also have no right to lead his or her own life. This is known as collectivism. In today’s society, making decisions for someone’s own good is very hard because everyone is trying to impress others. For example, in Anthem Equality states “It is a sin to think words no others think and to put them down upon a paper no others are to see” (17). The importance of this quote to the Consequences of Free will is that Equality is not able to express his own way of living because it is illegal to express his own being.

In The Hunger Games, something that readers would learn regarding the Consequences of Free Will would be the idea that the tributes did not really know who to trust, and when, because they did not know when that person would turn against them. Similarly, these two pieces of information would go to together by both dealing with the idea of being able to show a person’s own true colors. In addition to them being similar, they would differentiate by the thought of trust, and expression. In Anthem, we as readers are seeing the idea of expression, but in The Hunger Games, we are watching how others are putting their trust into some, and how they are also putting up walls to others.

Although these two societies are supposed to be completely different from the one that exists today, in some ways they could be seen as having the same “controlling” effect on the citizens. In our government, citizens have numerous more rights than other countries can even think of having, yet all of us choose to all try to be the same. Why is that? Why do individuals all strive to have the same hair, or wear the same clothes? Everyone should embrace our right to be dissimilar, and show the world that each and every one of us are not afraid to be ourselves, because there is no punishment that will be rewarded to us in long run. 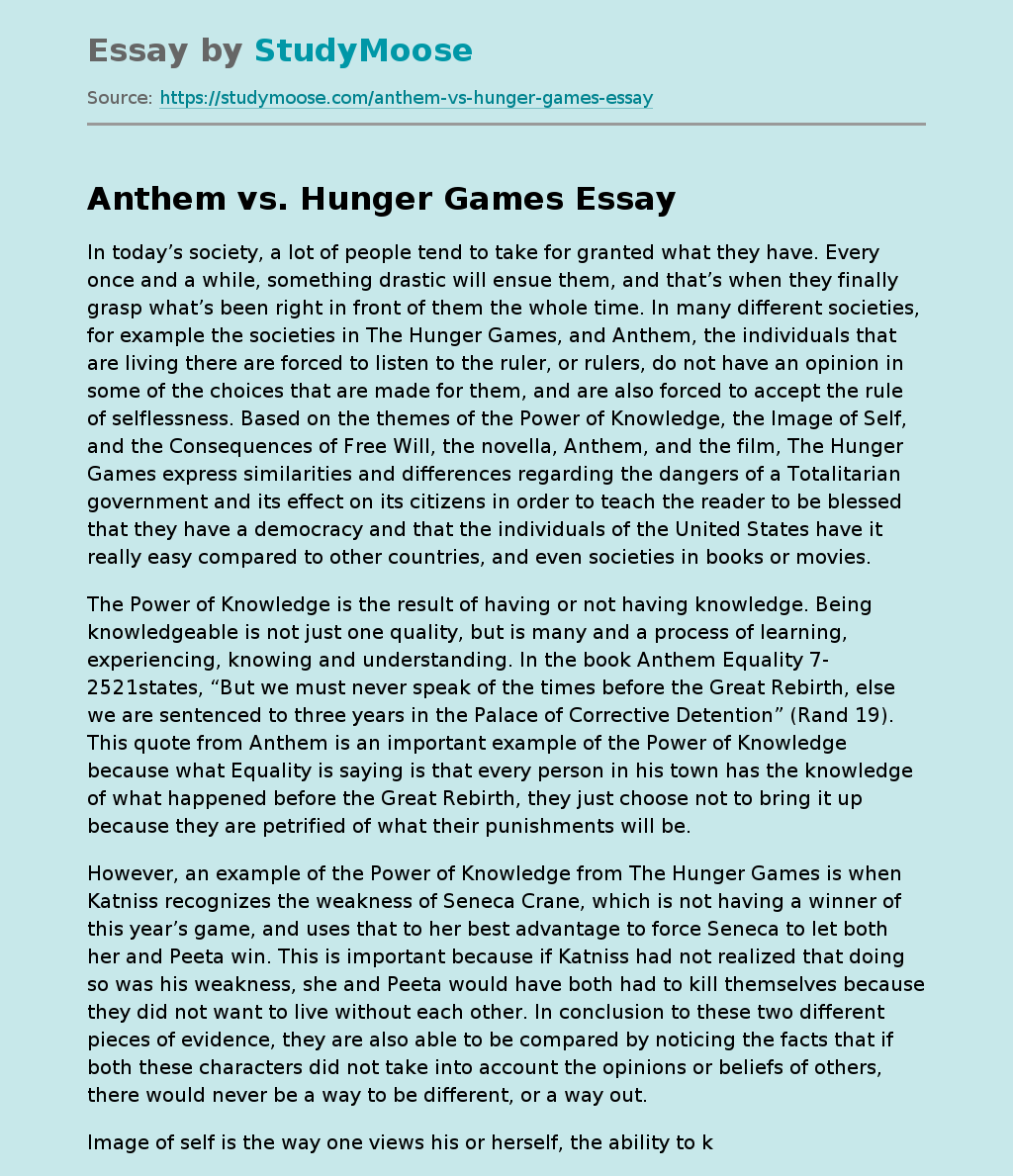