1.The sins/ wrongs that Equality 7-2521 accuses himself of are

•Sin to write
•Sin to think words no others think and to put them down on paper no others are to see
•We have committed a greater crime, and for this crime there is no name
•We are alone here under the earth. The laws say that non among men may be alone, ever and at any time.
•We were born with a curse. It has always driven us to thoughts which are forbidden.

2. Equality 7-2521 is happy when he hears his life mandate because he (they) knew that he was guilty, and felt as a street sweeper he would have a way to erase his sins.

4. This novel takes place in the future.

I know this because Equality refers to “the men before us”, and “the unmentionable times”. When he is underground in the tunnel.

5. If I had Equality’s curse my teachers would most likely react to this “curse” by giving me more challenging work to complete. Equality on the other hand isn’t so lucky because his “curse” is of high disapproval because they believe that no one should learn faster that his “brothers” and if one of them is “dumb” all of them need to be “dumb” along with his brothers, and Vice- Versa.

6. Equality doesn’t except the moral teachings of society. In fact he does man things to go against it. He even admits in the novel that he really doesn’t care. “and yet there is no shame in us and no regret. We say to ourselves that we are a wretch and a traitor. But we feel no burden upon our spirit and no fear in our heart. And it seems to us that our spirit is clear as a lake troubled by no eyes save those of the sun. And in our heart there is the peace we have known in twenty years.” This is an excerpt from the end of chapter one that shows although Equality knows that he has committed sins he is at peace even in his wrong doings.

Chapter Two
1.The character traits that are revealed are her straight and thin body, she has eyes that are dark, hard, glowing, fearless, unkind, and without guilt. She has golden hair, and is overall intimidating.

The great rebirth- the time period/ setting of the anthem

3.The word Equality is struggling with is the word “I”. I believe the mentioning of this word is punishable by death in there society because it goes against it and would cause the rediscovery of this word. The word “I” contradicts the ideals of the society because it goes against the great “we” idea, and way of life. the rediscovery of the word “I” could cause some of the people to rethink their way of life which could lead to riots, rebellion, and chaos. Chapter Three

1.Equality discovers how to make light out of copper, and wires. This is a very important discovery because it would make life easier by giving them brighter light, it wouldn’t burn out as quickly as a candle, and fires would be less likely.
2.The council of scholars believe that everyone knows everything that exist, if everyone doesn’t know about something then it doesn’t exist. Their belief’s contradicts with Equality’s beliefs because he believes that the secrets of the earth aren’t for everyone but for those who seek them. Chapter Four

1.Equality’s new name Unconquered is very fitting because Equality is a free willed character who hasn’t been conquered by the laws & ways that everyone is expected to live by, and doesn’t listen to the rules. Chapter Five

1.Equality’s main motivation in conducting his experiments is his hunger for knowledge, and to learn more of the times before the Great Rebirth. He felt joy when he was conducting his experiments because he was learning more 2.Equality is interested in seeing his own image because he wants to know how the Golden One sees him. Equality is starting to feel the emotion of self-interest, and love. Chapter Six

1.The real reasons behind the council’s rejection and fear of the gift is: •They are afraid of going back to the old way of technology and individualism, offending the council, and getting punished. •They want to keep everything as simple as possible for people so that they can rely on the council. 2.When Equality says “We are old now, but we were young this morning” , he means that now he feels more experienced, and has a better understanding of things than he did that morning before he escaped.

1.Equality is starting to experience love and affection for the Golden One and he is also feeling joy. Also since now Equality has become more dependent and has to hunt for his own food and feed himself he is feeling prideful. 2.Equality laughs when he remembers that he is “the Damned” because he doesn’t feel damned at all in fact he is happy.
3.In Anthem the Uncharted Forest symbolizes the unknown, and everything that came before the Great Rebirth. Chapter Nine

1.The house that Liberty & Equality is a two story house that has a flat roof, and lots of windows. It has one bedroom, a library full of books, a mirror, lights, and clothes. They found the house strange and unique because it had a flat roof ,and only one bedroom, this is strange for them because they are used to sleeping in a room with 30 other people. Also the house had a lot of things that they weren’t used to and had never seen like windows, mirrors, different clothes, and a room full of a bunch of unknown books. Chapter Eleven

1.The great discover that Equality make is the word “I”.
2.Equality realizes that the proper goal and purpose of his life is to focus and live for yourself and to not focus on others or live for others.

1.The main characters Equality, and the Golden One take the names Prometheus and Gaea because of who in history those names represent and because they read them in a book and didn’t know of any other names. They weren’t allowed to have names in there old society because having a name shows individualism, and makes you different from your brothers, and sisters. 2.In his future, Prometheus plans to raise his son to be an individualist and to use the word “I”. 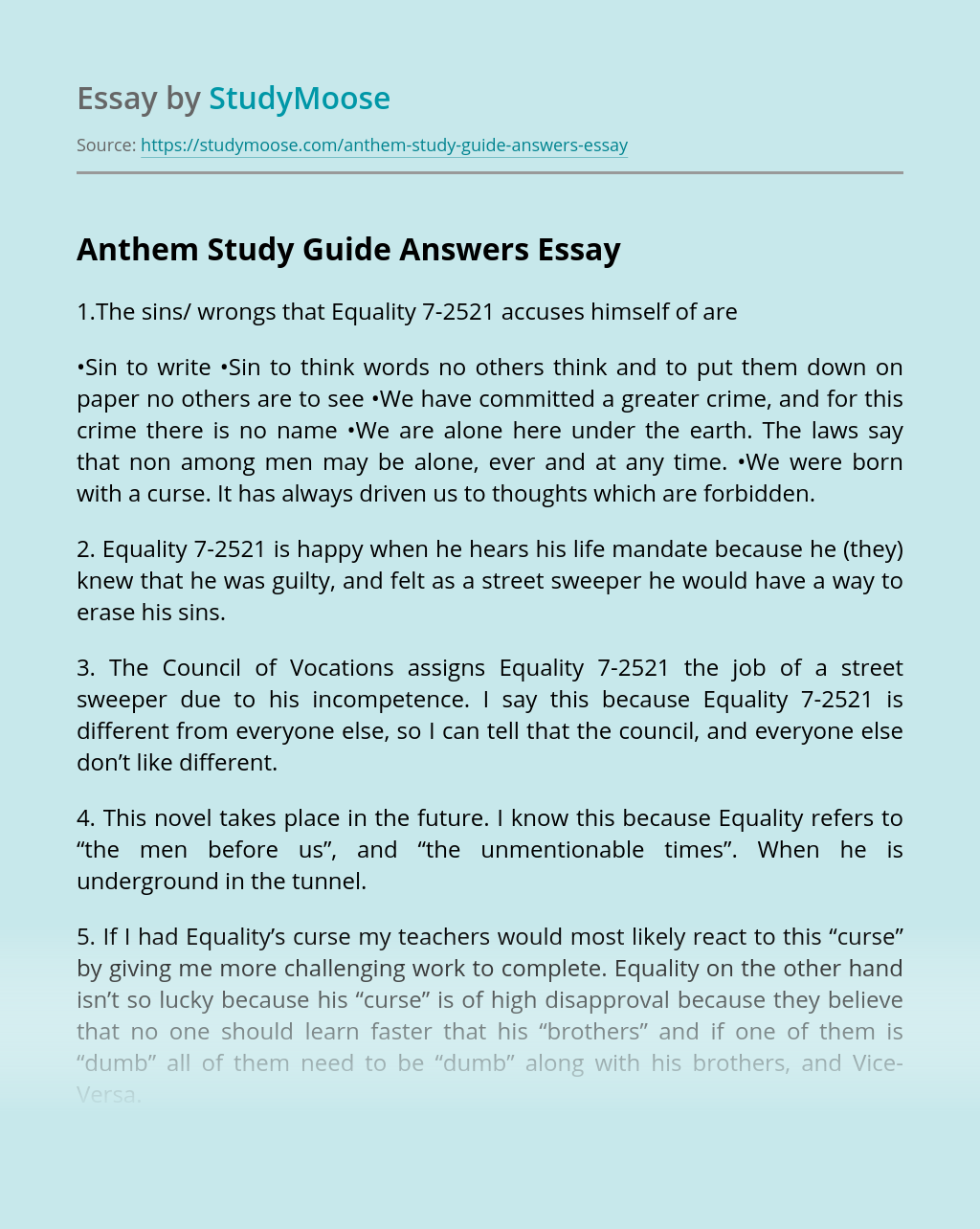