Anthem Philosophy: A Work of Literature

How does the philosophical nature of Anthem undermine or strengthen itself as a work of literature? Is it possible to appreciate Anthem as a work of literature without agreeing that it is a work of philosophy? In the book Anthem by Ayn Rand, Ayn goes deep into the book explaining how one person can work towards changing the existence of the human race. “The secrets of this Earth are not for all the men to see, but only for those who will week them”(52).

Don't use plagiarized sources. Get your custom essay on
“ Anthem Philosophy: A Work of Literature  ”
Get custom paper
NEW! smart matching with writer

Throughout Anthem, Prometheus unveils the truth about the World Council of Scholars.

Equality 7-2521, a character created by Ayn Rand was divergent compared to the surrounding men. A man who was considered to be 21 years of age and everyone is six feet tall, as not many men were actually the height. Equality knew he was different, but could tell no one. A book in which itself revolves around the word “philosophy” brings a lot to it. Reading further and deeper into the book, truly understanding philosophy and the knowledge of and existence of the people in Anthem.

“The word “WE” is as lime poured over men, which sets and hardens to stone, and crushes all beneath it… It is the word by which the depraved steal the Virtue of the good… by which the fools steals the wisdom of the sages”(97). Memories from the past were wiped and nothing of the past was left. The men have no memories of what came before them, and all they knew was what the Council of Scholars have told them.

Equality knew there was more than what was being told. Perhaps too much was not being told…

Rules in this society are more powerful and impactful to the people of the society than some leaders are to the citizens of their countries. The only things citizens are worried about is living between the lines because of what might happen. They do not know what happen if they break certain rules, so why risk it. They know that there is cruel punishments, but the rules are known and strictly enforced so why try to go outside the box. “There is fear hanging in the air of the sleeping halls, and in the air of the streets” (Rand 46). Rules only exist to create the feeling of power towards rulers and to create the feeling of fear throughout their citizen body.

Why try to break the norm when they get food, drinks, and a shelter over their head. Their life is set, the “only bad part”, is they do not have a name and can not talk to anybody that is not in their group.

Rules, the backbone of the society. The only reason people as they knew it were acting like robots, working day in and day out, only to grow up to be pointless. The reproduction stage of life is even controlled. Mates are manually put together, only to give birth and never see their baby ever again. Their purposes may be deeper than one would expect. They do not only regulate people, they control the citizens like they are in control of their brain, their thoughts, their lives. “This is an evil thing to say, for it’s transgression…” (Rand 30). They can not say anything they want, the people do not have minds for themselves, leading to no control or self knowledge. They literally do not know who they are or where they came from. That is the purpose, make them know nothing about themselves so they can only focus about their work, and being one with the group, we.

Although you are not supposed to think of themselves more superior than others, Equality 7-2521 wants to break the rules and live his own life, creating his new society with no restrictions. Equality 7-2521 broke every restriction, rule, and orders that there ever was. He did not break through like that to not prove a point and live the same life as before. He wanted to show people that he could be brave and have the courage to not deal with the dictatorship anymore. Rules should not have to scare a person so much they live a life in fear, they should encourage a human being to live the best life possible and inspire them to do better things.

Anthem Philosophy: A Work of Literature . (2021, Dec 03). Retrieved from https://studymoose.com/anthem-philosophy-a-work-of-literature-essay 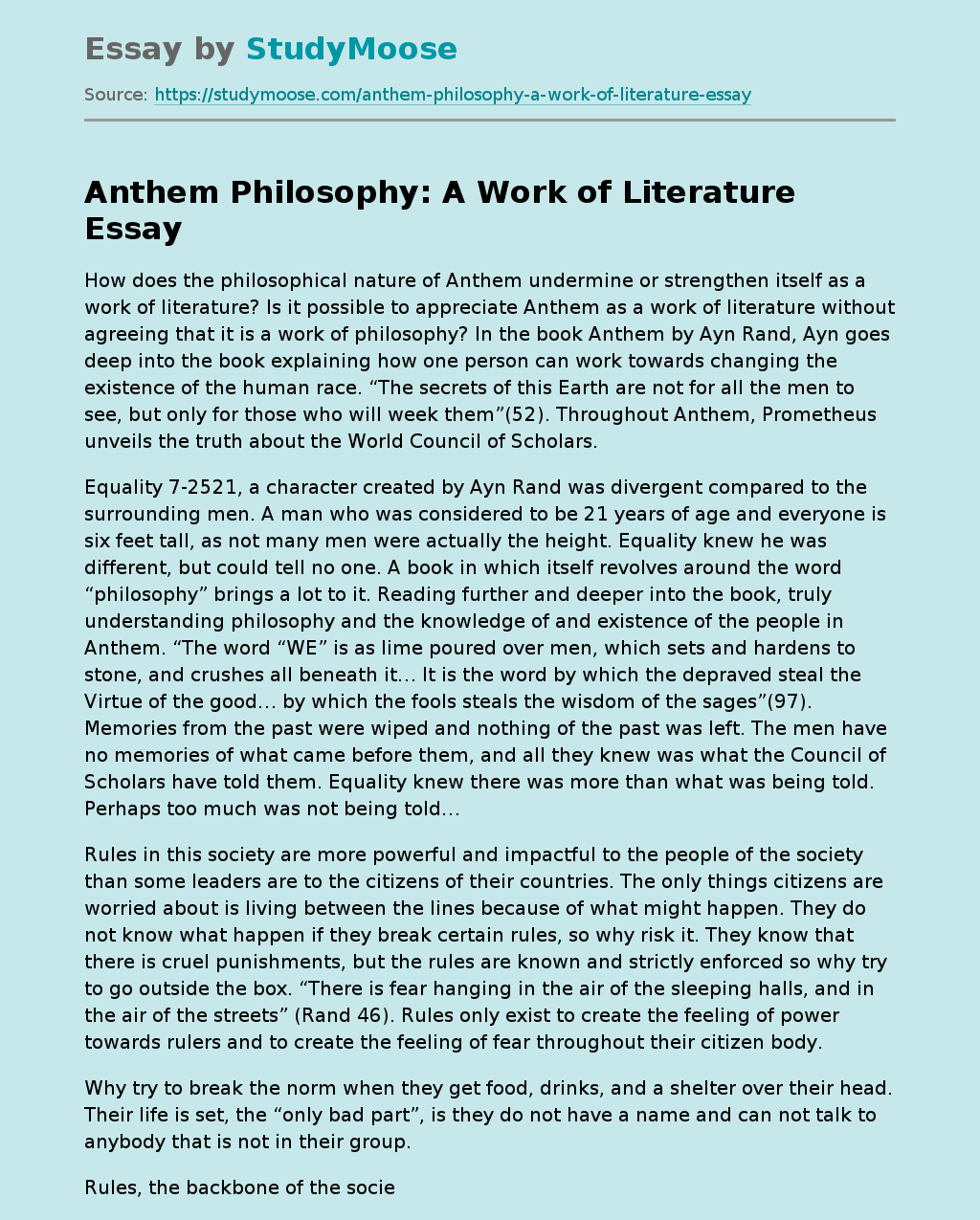