Categories: EconomicsFree Essays
Download paper
Download
Essay, Pages 4 (808 words)
Views
370
The using up of material goods necessary for human physical survival is called
Consumption
To the question “Why do people X raise peanuts and sorghum?” Malinowski would reply
To meet their basic human need for food
The social connections linking human beings who engage in different production tasks and who must work together are called
Relations of production
In the early twentieth century, food production in Tuscany corresponded to which of the following?
-A strict division of labor between men and women

-A model based on large landholdings worked by peasant laborers

A person’s particular social position in a group is that person’s
Status
Patterns according to which distribution takes place, such as reciprocity, redistribution, and market exchange are referred to as
Modes of exchange
According to Daniel Miller, for many observers of global consumption, Coca-Cola is
A symbol of the destructive global potential of capitalist consumption
The economic theory that represented a formal attempt to explain the workings of capitalist enterprise and paid particular attention to distribution is
Neoclassical economic theory
According to Daniel Miller, Coca-Cola in Trinidad is
One of several beverages that fits into local categories about sweet drinks
Annette Weiner argues that the role of women’s wealth in Trobriand society
Could disappear if cash ever become widely substitutable for yams
Marshall Sahlins coined the expression “the original affluent society” to describe
The Ju/’hoansi and others like them
The theft of a few head of cattle from your heard by a neighboring group of herders from whom members of your family had rustled a few head of cattle in the past would be an example of which mode of exchange?
Negative reciprocity
A __________ is a historically occurring set of social relations through which labor is organized to extract energy from the environment by mean of tools, skills, organization, and knowledge
Mode of production
Complex variable and enduring forms of cultural practices that organize social life are called
Institutions
An economic system dominated by the supply-demand-price mechanism called the “market” is
Capitalism
Impersonal economic exchanges typical of the capitalist market in which goods are exchanged for cash are called
Commodity exchanges
According to Marshall Sahlins, which of the following is a route to affluence?
-Producing much
-Desiring little
Which of the following is an example of redistribution?
-Potlatch
-Internal Revenue Service
-Salvation Army
Anthropologists consider a reciprocal situation in which parties to the exchange hope to get something for nothing to be
Negative reciprocity
Among the Trobriand Islanders, women’s wealth
Is exchanged for yams
The exchange of goods calculated in terms of a multipurpose medium of exchange and standard of value carried out by means of a supply-demand-price mechanism is called
Market exchange
The way of life that grew in response to and in service of the “market” is referred to as
Capitalism
The mode of exchange that requires some form of centralized social organization to receive economic contributions from all members of the group and to allocate them in such a way as to provide for every member of the group is called
Redistribution
The exchange of goods and services of equal value is called
Reciprocity
A reciprocal situation in which a return of equal value is expected within a specified time limit demonstrates what anthropologists consider
Balanced reciprocity
Ranked groups within a hierarchically stratified society whose membership is defined primarily in terms of wealth, occupation, or other economic criteria are called
Classes
Carole Counihan, cited in the text, notes that her younger female interviewees were
Expected to work for wages but also maintained the household, including doing the cooking
To the question “Why do people X raise peanuts and sorghum?” Malinowski would reply
To meet their basic human need for food
In the 1960s, Richard Lee discovered that, in order to find enough food to survive, Ju/’hoansi foragers had to work
About 20 hours per week per person
Anthropologist I. M. Lewis compared the social organization of the northern Somalis and the Boran Galla, who live next to each other in semiarid scrubland and herd the same animals. His comparison showed that
The Somali and Boran are quite different in social structure
According to Annette Weiner, the exchange of banana leaf bundles during mortuary rituals in the Trobriands
Allows Trobrianders to represent and affirm the most fundamental relationships in their social system
In many small town cafes in Minnesota (and elsewhere, we are sure) there is a dice cup on each table, used by the morning-coffee regulars to see who pays for the coffee each day. This works because the regulars assume that “it’ll all even out eventually.” Another phrase for this is
Generalized reciprocity
Noncapitalist forms of economic exchange that are deeply embedded in social relations and always require reciprocity are called
Gift exchange
Marshall Sahlins coined the expression “the original affluent society” to describe
The Ju/’hoansi and others like them 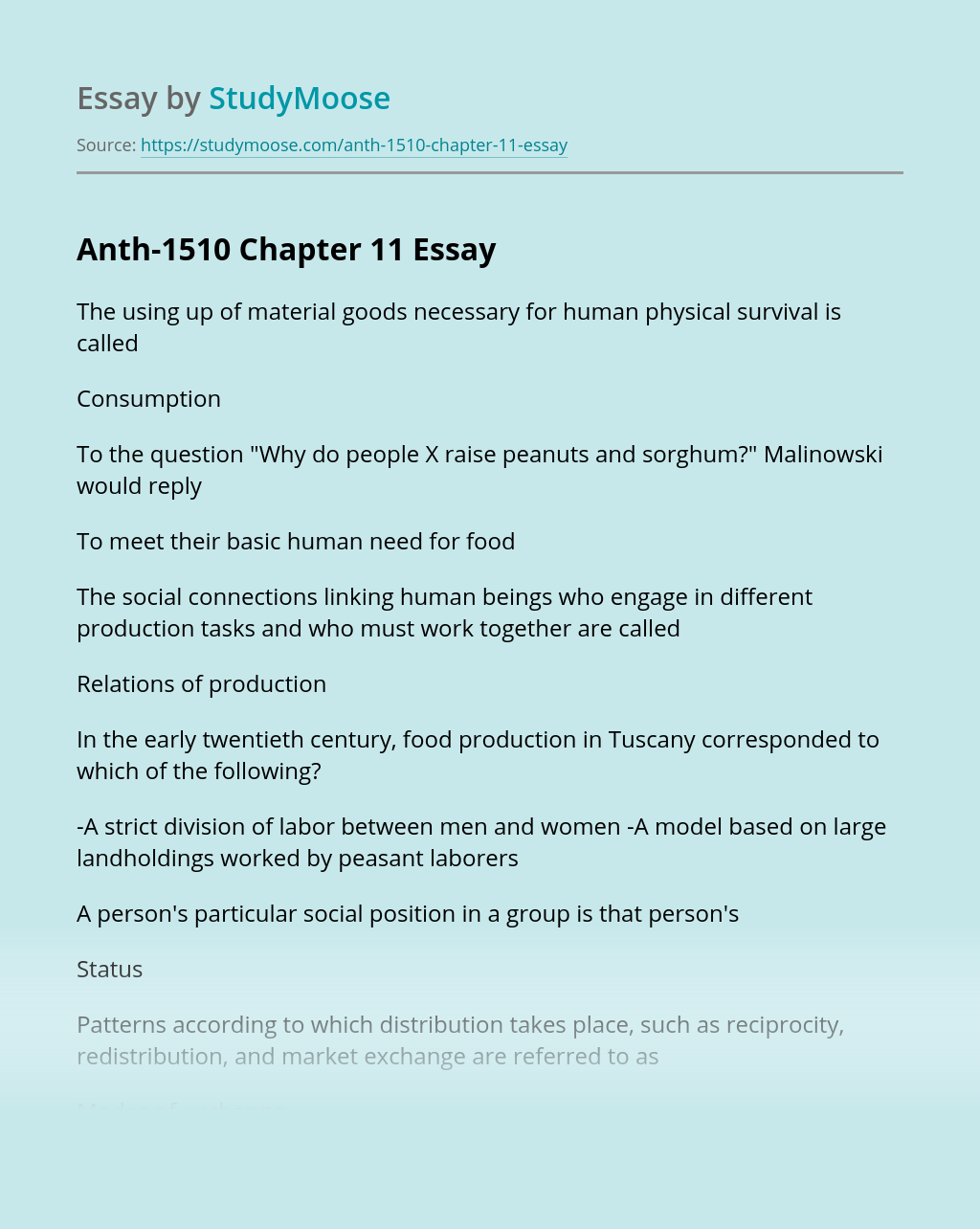