Answer Sheet: How Are Microscopic Protest and Fungi Classified?

1. Different type of protists moves in different ways. Name and describe how one of the protist you observed moves.

The Amoeba moves from the bottom left corner towards the top right corner and engulfs the food.

2. Why are plant-like protists important to the food chain?

Both protists and fungi serve as important links in the food chains of various ecosystems. Fungi play crucial roles as decomposers, breaking down decaying organisms and wastes.

3. Which of the organisms that you observed could not move? Why?

The Rhizopus, Penicillium, and Saccharomyces are all Fungi.

Don't use plagiarized sources. Get your custom essay on
“ Answer Sheet: How Are Microscopic Protest and Fungi Classified? ”
Get custom paper
NEW! smart matching with writer

They do not move because they are all usually found in areas that has constant and readily available food supply.

4. Which of the protist you observed had both plantlike and animal like characteristics? Why?

5. Explain why algae are considered to be plantlike?

6. Locomotion is generally a characteristic of animals. However, plantlike protists move about by means of flagella. What is the advantage of a photosynthetic organisms that is able to move from place to place?

Locomotion would be extremely beneficial to any photosynthetic organism, because there organisms require sunlight to carry out their respiration.

As the sun moves across the sky, photosynthetic organisms that are mobile are able to more with the sun rather than being in the dark where they cannot continue their respiration.

7. Explain how protist are thought to have given rise to multicellular organisms.

8. How do the fungi you identified obtain food?

The fungi that I identified are normally in areas such as an animal’s bloodstream or intestine where food is readily available. They secrete enzymes to digest food outside of themselves, and then absorb the digested food.

9. How are fungi important to the environment?

Fungi are vital in nearly every ecosystem on Earth. Fungi play crucial roles as decomposers, breaking down decaying organisms and wastes.

Answer Sheet: How Are Microscopic Protest and Fungi Classified?. (2017, Feb 27). Retrieved from http://studymoose.com/answer-sheet-how-are-microscopic-protest-and-fungi-classified-essay 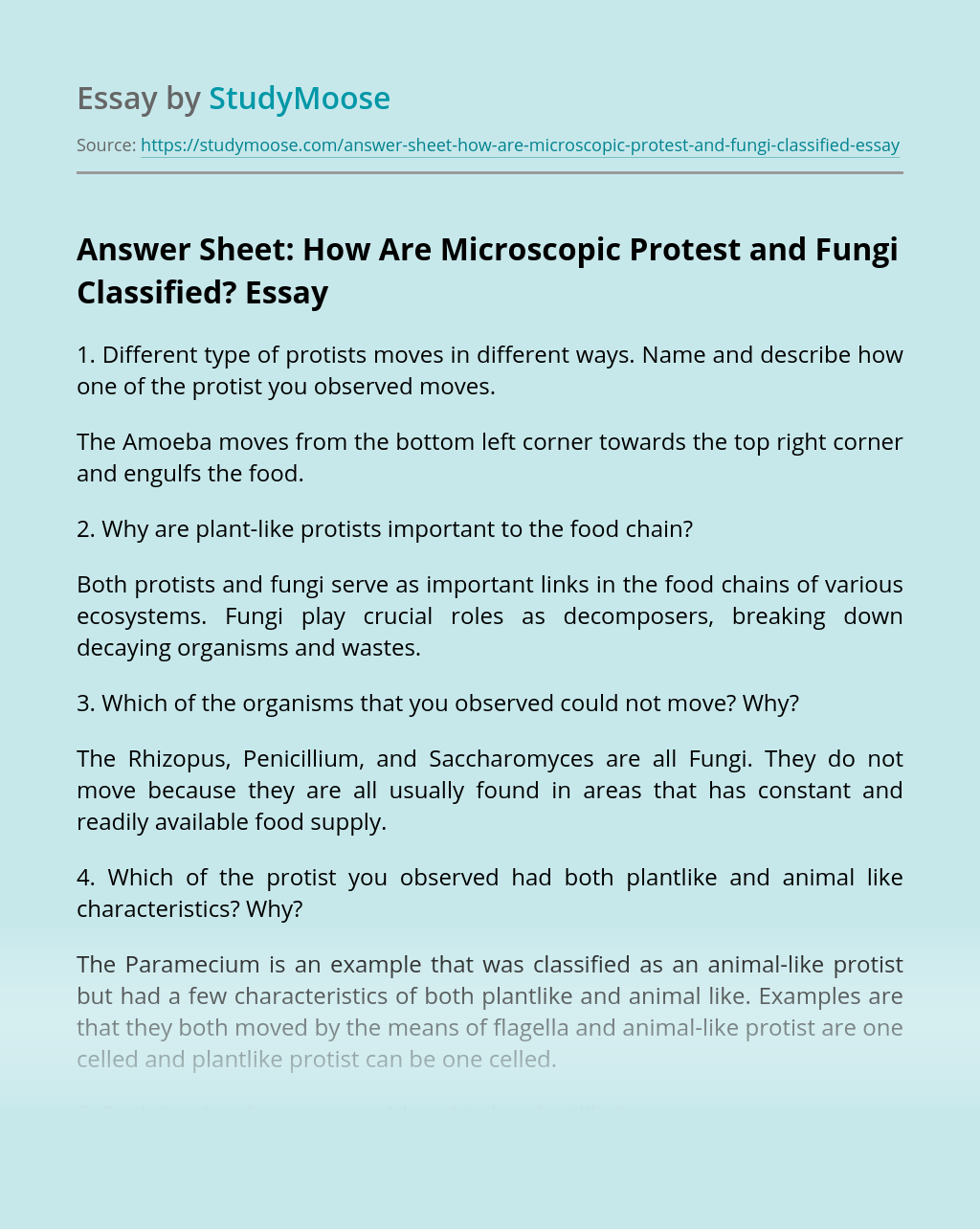