The ontological argument was put forth at first as a prayer by the eleventh century monk and philosopher Anselm of Canterbury. In his Proslogion, which means discourse, he presented this argument as a prayer for believers to substantiate their belief in god. Anselm uses ‘a priori’ (which means before experience) reasoning, which conveys that it does not rely or depend on experience and so an argument of this sort is more plausible and likely to intrigue and attract philosophers, by not depending on experience or acquaintances it can be understood and derived purely from logic.

Don't use plagiarized sources. Get your custom essay on
“ Anselm’s Ontological Argument in Philosophy ”
Get custom paper
NEW! smart matching with writer

Furthermore its truth doesn’t depend on anything apart from logic and can be deduced purely from the meaning of the words used in the argument. The ontological argument uses deductive reasoning, which means its conclusion is contained within the premises presented, and if one accepts these premises to be true then one must accept that the conclusion is also correct; an argument of this sort would be:

From this example if we accept the premises (1&2) then logically we must accept the conclusion (3) so in some form this argument presents a guarantee of the truth of the conclusion. Anselm’s argument said ‘God is that than which nothing greater can be conceived’, by greater he means perfect and by conceived he means to think of, so we can put in other words: God is that than which nothing more perfect can be thought of.

When Anselm first wrote this in the Proslogion, his intentions for this were not for it to be used as an argument to prove God’s existence but just a mere prayer for believers, but due to his reliance solely on reason and logic it has become popular and has overcome the test of time as it is still relevant today and is being studied.

The argument can take this form:

Anselm understood god in an analytical sense, analytic sense is where the whole meaning of a word or statement is transferred through the words only, like for example, Tom has a brother, you wouldn’t say he has a brother who is a male because the fact that he is a male is already conveyed through the meaning of the word brother. And so likewise, Anselm understood god in the same way, so it isn’t necessary to say ‘god, you know exists’ the aspect of existence is already given away from the word god, and so in a way could be perceived as inseparable from god.

This argument mentioned hitherto was found in Proslogion 2, which tried to prove gods existence. A contemporary of his, Gaunilo of Marmoutier who was a monk and also a theist, replied to Anselm’s Proslogion, with a work titled ‘On Behalf of the Fool’, he was truly also a Christian and had a firm belief in god, but he rejected the jump from the definition that god is the greatest being to the conclusion that he must exist. Gaunilo claimed that through Anselm’s reasoning we can potentially prove anything one wishes into existence by proposing it’s the greatest thing or maximally perfect in its calibre.

He used the example of an Island, that if we were to say that there existed an island which was the most excellent and possessed an inestimable wealth, we can easily understand this; even a fool can comprehend this. And therefore it is the most excellent, and it is more excellent to exist both in reality and in understanding moreover this island must exist. He argued even a fool is right to be sceptical about Anselm’s argument, as evidence is required for a matter as great as god. Furthermore he went on to claim that Anselm’s argument is a ‘reducto ad absurdum’, this is Latin for reduced to absurdity.

As Anselm was aware of this criticism during his lifetime, he wrote a Reply to Gaunilo, in this he defends his argument and draws up another aspect. He says ‘God cannot be conceived not to exist… That which can be conceived not to exist is not god’. This introduces another matter; Anselm asks whether a god is greater who can be thought of as not existing or a god which cannot be thought of not existing. Furthermore he claims that it is a contradiction for a god who can be thought of not existing if he truly is the greatest possible.

Anselm created a dichotomy between the concepts of things: necessary and contingent existences. Anselm himself didn’t use these aforementioned terms himself but were later applied by philosophers but Anselm did split the two as he described the island as physical and therefore he could easily propose that it could cease to exist due to other physical causes like for example the sea levels rising could eradicate the island completely. However he said that it is impossible to imagine the greatest being not existing or ceasing to exist, and then surely it would not be the greatest being.

Necessary existences do not depend on any other thing for it to exist, as it is the greatest thing so it is not predisposed to anything else. On the other hand, contingent existences do depend on other things and also there was a time when they didn’t exist, like for example humans, who are a perfect example of a contingent being. However Anselm argued that god was a necessary being, and it cannot be thought of as not existing, it has always exists and always will. It is rather hard to conceive of another necessary being or existence apart from this. Anselm put forward this proposition in Proslogion 3, that god has a necessary existence, and this is the type of god that he is, in this way Anselm shows that Gaunilo was a fool as he didn’t understand the type of god that Anselm discussed. 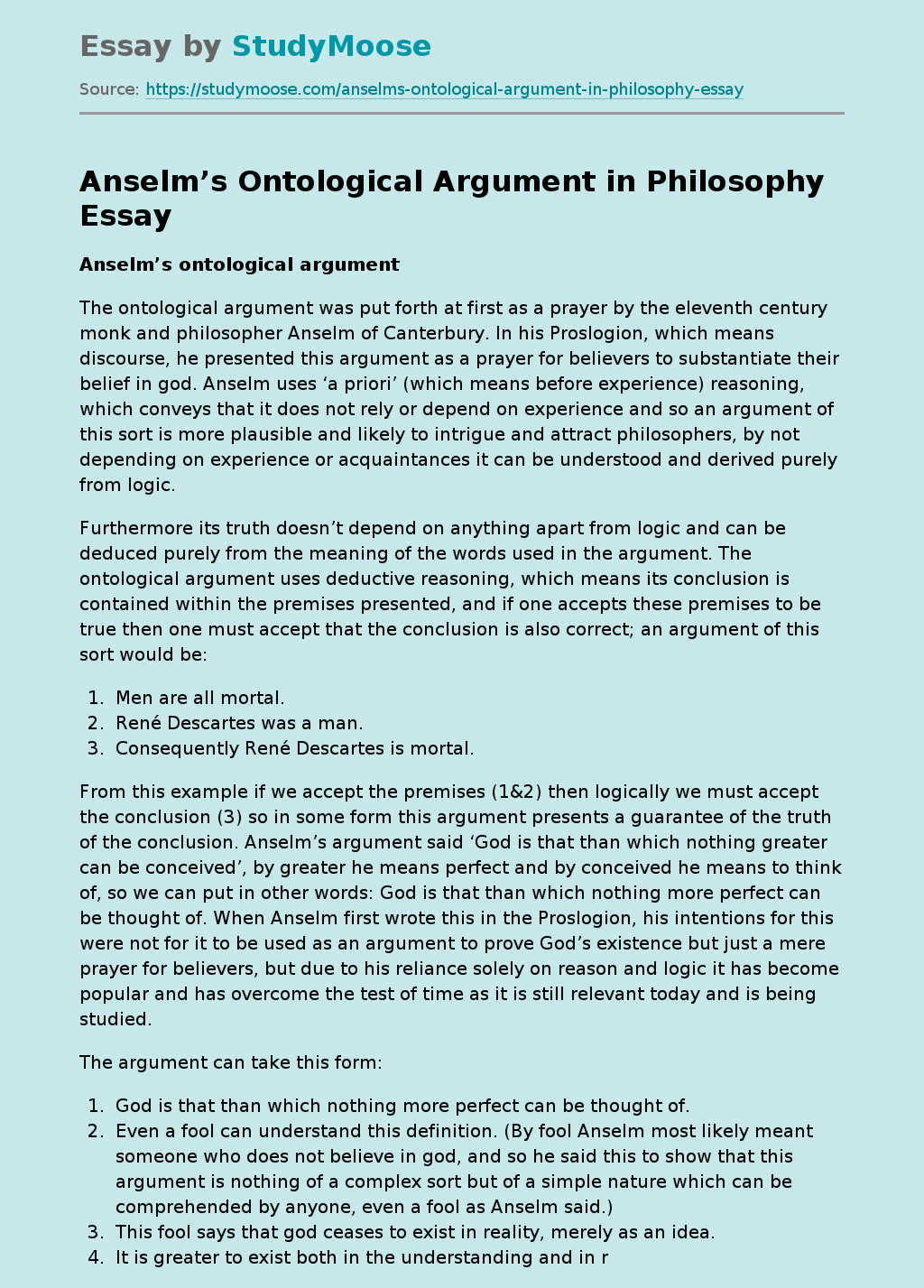