The 16th Dec is the founation day of my school and besides other annual co-curricular events like the magic show, fun fair, annual sports day is the event that students wait for anxiously . This event develops competitiveness, sports man spirit and team work among the students. They are full of joy on this day.

As usual an interesting programme was chalked out for the day and printed copies were distributed to the students. The parents were also invited alongwith other digniteries and the chief guest.

Don't use plagiarized sources. Get your custom essay on
“ Annual Sports Day ”
Get custom paper
NEW! smart matching with writer

All the participants of different events were short listed and encouraged to get practice before the event. The physical training instructor was the incharge of the whole show and a full dress rehearsal was carried out a day before to give the final touches to the preparations.

A DJ was specially hired to add some musical flavour to the event. An ex-student of the school hosted the event and added excitement to the occasion by her fluent, graceful and spontaneous commentary of the proceedings.

The show began exactly at 10 AM after the chief guest has arrived at he stage with big round of applause. Parents had already seated in a separate pavillion and looked excited to see their children partcipating in the sports.

At the beginning a boy of 9th class recited few verses of the Holy Quraan which was folowed by Naat to pay homage to the Holy Prophet (PBUH). First of all the atheletes, taking part in diferent events staged a march-past and assembled in front of the main pavillion.

A student of 9th class stepped forward and requested the chief guest to formally declare the sports day open with a loud beat of drum and music.

To start with, different races were staged among students of junior sectionwhich included the banana race, cycle race, baloon race, and back-ball race. It was great fun watching little kids making funny moves. A wonderful display of physical exercise was exhibited by all the students of school. A photographer was busy in capturing the events. Then it was the turn of lthe senior section to show their talent in the races like the spoon race, sack race, the three-legged race, the dress-up race, 100 meter race and the 4X100 meter relay race. The famous tug of war won by the 9th class boys who displayed their sheer power and team work to win the contest.

Students, teachers and parents shouted and cheered to encourage participants while the DJ added more drama with his musical flashes. The host kept the audience interested and informed by her articulate and fluent commentary. After races children, clad in the karate uniforms, came running in with their hands of their hips to exhibit their skills i the martial arts and self defence. It was followed by a brave display of smashing tiles with their fists and foreheads. Our PTI himself performed a dangerous stunt by breaking a stack of burning tiles with his hand on fire. Every one was dumb founded to see this and gave him a big applause.

The girls of senior section performed aerobic exercise with musical rhythm in a graceful style. After that, a boy from 10th class sang a popular song of the famous Junoon band while a grils also sang a sufi folk song and got cheered and applauded by all the audiences. Pre-nursary kids presented and fancy dress show and exhibited as a king & queen, an angel, a soldier, a supreman and few more characters which looked so innocent and cute.

At the end the host requested the chief guest to give away prizes to the winners of the different events. To conclude the show the chief guest delivered a brief speech which was followed by ex-principals address who shared her views and experiences and also announced donation for the teaching staff. In the closing speech, the principal thanked all the guests and parents for their valued presence and lauded the students spirit of competition and participation specially to the students who volunteered alongwith teachers in making the whole event a great success. 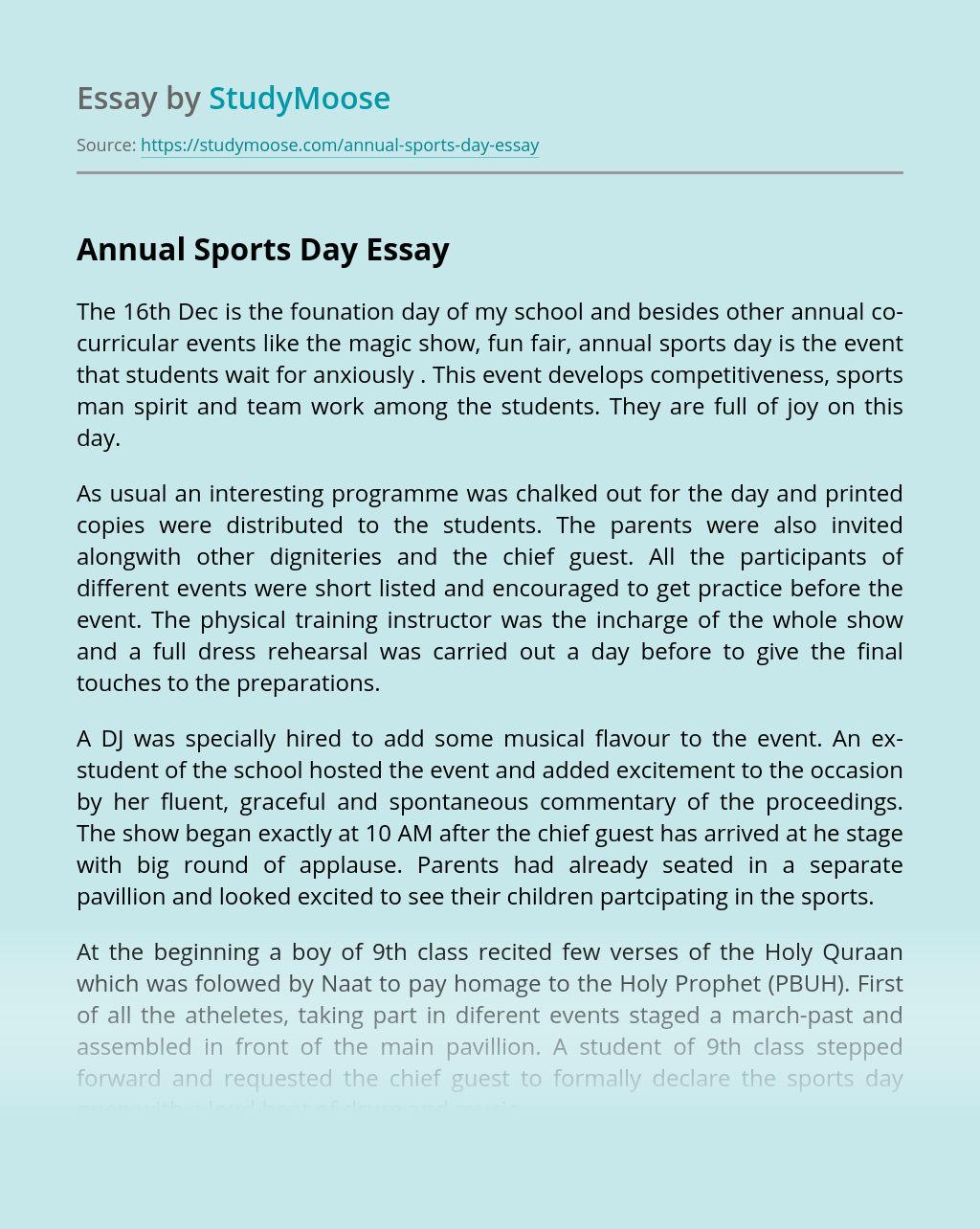