Other artists represent the dramatic structures, terms, images and characters from William Shakespeare’s Hamlet by portraying the exact emotion of the play. They act out a good representation of the spiritual experience in visual terms. The students vision studies and its importance in writings on aesthetics and representation. Adams, Joseph Quincy, “Arrival in London. ” A Life of William Shakespeare. S. I: Houghton, 1923: 126-128. There were three classes of persons at the playhouse besides musicians. There were sharers, hirelings, and servants.

Don't use plagiarized sources. Get your custom essay on
“ Annotated Bibliography on William Shakespeares “Hamlet” ”
Get custom paper
NEW! smart matching with writer

The “sharers” were the most important actors.

According to their merits, they enjoyed either half-sharers or whole-sharers as indicated by Hamlet. Below the sharers in rank were the “hirelings” who did not profit by large takings of the theatre. The third and final class, the servants, was the prompters, stagehands, property keepers, and caretakers. Chute, Marchette, “Hamlet. ” Stories from Shakespeare. Cleveland: World, 1956: 157-160 Hamlet is perhaps one of the most famous of all of William Shakespeare’s tragedies. It is known all over the world and has kept a compelling fascination wherever it goes.

The hero is so real and his dilemma is very basic to human living that people in every country recognize him. Hamlet is not only the most brilliant of the tragedies but one of the saddest. It is the saddest tragedy because the hero is not destroyed or killed by any evil in his nature but by kind misplaced good. Coleridge, Samuel Taylor, “ Lectures and Notes on Shakespeare and other English Poets. ” Online. Internet. Available: http://shakespearean.

org. uk/haml-col. htm. (6 February 2004) Hamlet’s character is the prevalence of the abstracting and generalizing habit over the practical.

He does not want courage, skill, will, or opportunity; but every incident sets him thinking; and it is curious, and at the same time strictly natural, that Hamlet, who all the play seems reason itself, should be impelled, at last, by mere accident, to effect his object. Lamb, Gregory M. “A sweet, gentle, inspired Hamlet. ” Christian Science Monitor: 20 April 2001. (6 February 2004). T. S. Eliot called Hamlet the “Mona Lisa of Literature”. No matter how hard we look at the play, it never yields all its secrets. We have become fascinated by it.

This being Shakespeare, a ripping good story unfolds, of course, from the moment a creepy ghost walks the castle’s parapet on through murders, suicide, and enough plot twist and complex relationships for any soap-opera fan. This is all topped with a dramatic sword fight. Hamlet is no Bruce Willis tale of an action hero on a payback mission. “Shakespeare” Britannica, 1989 During Shakespeare’s early career dramatists sold their play to an actor company, who then takes charge of them, prepared working prompt books, and did whatever it takes to make sure other companies did not take their work.

This way they could exploit the play itself for as long as it drew an audience. Some plays did get published into smaller books called quartos. Hamlet quartos are a good example of plays that were pirated or bad text. “Shakespeare, William” The World Book Encyclopedia, 1979 Shakespeare wrote his greatest tragedies during the third period (1601-1608) of his artistic development. Of all the tragedy plays, Hamlet has to be the most dramatic and saddest of all the plays. The role of Hamlet in particular is considered one of the theater’s greatest acting challenges.

Shakespeare focused the play on the deep conflict within the thoughtful and idealistic Hamlet as he is torn between the demands of his emotions and the hesitant skepticism of his mind. Thorndike, Ashley Horace. Shakespeare’s Theater. New York: The MacMillian Company, 1916:246-251. Records of court performance are abundant and descriptions of performances of traveling actors before noble or king may be found in Hamlet. The traditions and standards of acting accumulated by a generation of practice before an increasing audience. This made the play more exciting to watch every time it was portrayed. 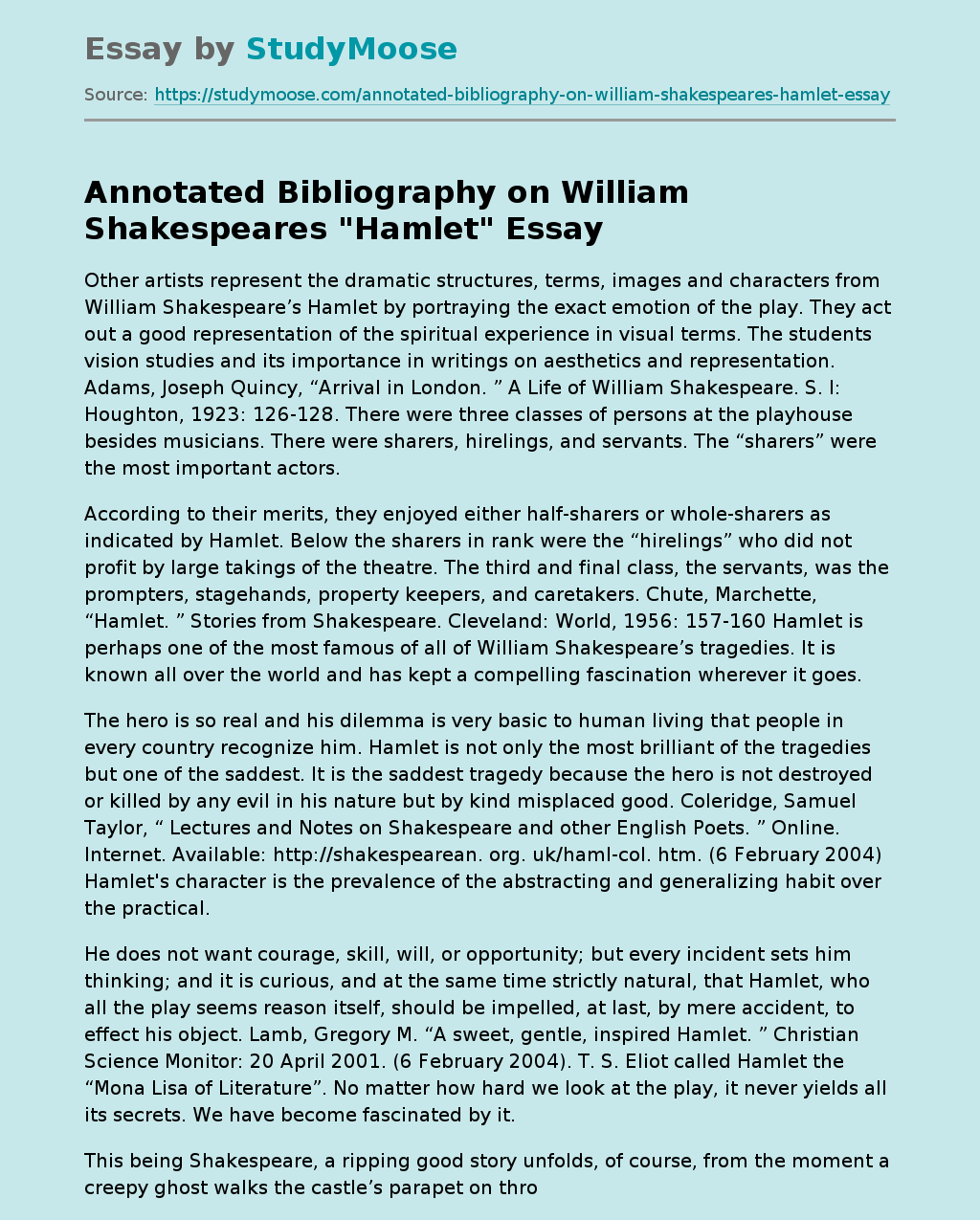