Anne Lamott begins “Shitty First Drafts” by stating that good writers go through a process of writing awful first drafts to ultimately write better and final drafts. She explains that most people believe published, successful writers always write great first drafts. In actuality, most writers do not know where their writing is headed until the draft has been revised many times. The author explains that for most writers, writing is not an enjoyable experience, yet by following a proven technique they are able to obtain beautiful masterpieces.

The first draft, according to Lamott, is where an author can expel every single one of their thoughts, knowing that it is something that can later be changed. In her writing, she compares the first draft to a child which can morph into an amazing final draft. Everything does not have to make sense or be rational. The first draft is a place where a writer is able to process exactly what they are trying to accomplish in their writing.

Lamott describes what consisted in her writing process when she would write food reviews for a magazine.

The initial step was to go to the restaurant with a few friends and if an attention-grabbing statement was made by anyone, she would write it down. The next day, armed with her notes, she would begin the painstaking process of writing her article. Trying to find the direction in which she was headed, she would write something down, only to promptly cross it out and begin again.

After several failed attempts she would feel the dread creep in; would she be able to pull it off?

After endlessly stressing about not being able to write the review, she would recognize that the first step in writing was to at least set the article in motion by writing the first couple of sentence. Once she began her article, she knew that she would be able to find the main points that she sought to express. Her first drafts were always too long and too boring because she would just write everything down, whether it made sense or not.

On her second day of her writing method, she would go through her draft with a butcher’s knife, cutting out all that did not convey what she was attempting to express. She would use her first draft to determine what worked and what did not, while searching for the jewel hidden within all the useless words and ideas. In the end, Lamott’s reviews became what she intended them to be: organized, coherent, and ultimately beneficial to the magazine. She concluded that she understood that the first draft is intended to be terrible, but by following a proven process, she is able to improve her writing. 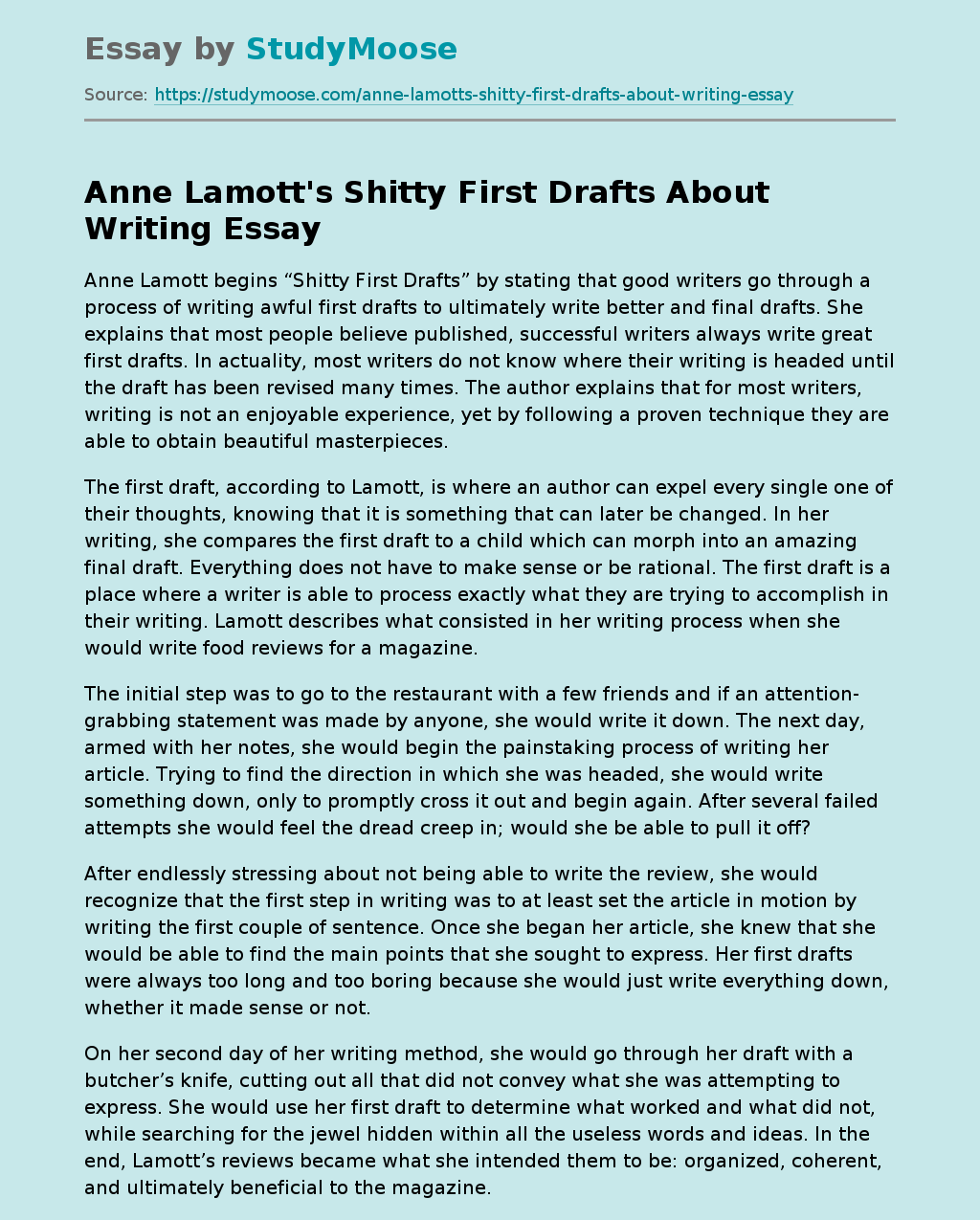