Fiedler’s Contingency Model:
The Contingency Model that was developed by Fiedler’s and his associates was aimed to link the leadership style with the situation and circumstances surrounding each leader. (The Leadership Experience. p.68). Now will try to assess the leadership style of Anne Mulcahy to test the extent to which she was a relationship-oriented leader or a task-oriented leader. One of the first things she talked about on the short movie that we watched in class was that a lot of her time in the first few months “was spent listening” to employees and customers which shows how much she cared about them and their needs.

In page 3 of the article written by Betsy Morris, she clearly says that “nothing spooked” her as much as thinking about the 96,000 people who worked for Xerox “if this thing went south”. In addition to passionately listening to her customers and employees, she was very humble asking for any kind of help from employees or investors.

This is probably driven by her desire to keep Xerox alive for the people regardless to endless calls from financial advisors to file bankruptcy. Anne once asked if anyone in the company could teach here Balance Sheet 101, so she could relate her decisions to how the balance sheet would be effected. This was not the first time she asked for help, which in my opinion, was unusual but very encouraging to other employees to seek help whenever needed. She also personally met with top executives and was open with them to discuss every detail about the company and encouraged their involvements in the decisions.

All of these and other evidences show the extent to which she was a relationship-oriented leader.

On the other hand, she was also focusing on setting clear financial growth goals for the company even of the decisions made would harm some individuals. In other words, she was favoring the company’s sustainability and long-term interest over the individual’s interests. She, for example, reduced the work force by 30,000 in order to accomplish the 5% annual growth by 2005. Therefore, in this situation, she made a tough decision and was a taskoriented leader. Also, when she took home binders and insisted to understand the financial side

in making the right decisions, she possessed a high level of task-oriented. The case also tells us in page 6 that she had not taken a single weekend in two years, which shows how much she was focused on her goals for the company. Regarding the situation in which she worked, she had respect and trust between her and the subordinates. When there should be a tough decision to make, she would not hesitate like the case with auditors that she entirely replace Path-Goal Theory:

In this theory, the leader is focused in motivating the people around him or her to achieve the ultimate organizations’ goals. (The Leadership Experience. p.77). One example to show that this was applicable with Anne Mulcahy is that when she met with the 100 top executives to assess their character and encourage them to do more for the better of the company. Ursula Burns had a better offer at another company and knew the situation of Xerox but with conversations with Anne Mulcahy, she was convinced to stay and focus to work harder. In this meeting, Anne was successful in motivating the top executives to link themselves more toward the company’s goals than to turn around.

Core values are “fundamentals beliefs that an individual considers to be important, are relatively stable over time, have an impact on attitudes and behavior’. (The class PowerPoint). Anne Mulcahy has both end values and instrumental values. For example, one of her values is that she is extremely loyal to Xerox that she defined herself as the “culture” of it and never accepted any blame to her employees. She had faith that by working together with subordinates, she would accomplish her goals, and she did. She is very “subborn” as the case described that she never paid attention to her outside advisors to consider bankruptcy. In fact, her strong values forced the

advisors to finally quit trying to convince her to file for Chapter 11. She believed in team work and encouraged employees to be always focused. She gave her employees confidence by having open dialogues with them and asking them to contribute their ideas and opinions. She had the extraordinary ability to stay focused even in hard time and in times of crises. She cared about the employees and their future and rewarded them by all means that she even “gave all employees their birthdays off”.

Anne’s leadership vision and mission for the organization:
Anne’s had the ability to envision the future of Xerox and its people. It is unbelievable how she ignored the many calls by “advisors’ to consider bankruptcy. She was so focused and could see the future of Xerox again. In the entire case, there was not a single line that indicates weakness or hesitant in her decision. In fact, it is the contrary. “Do not even go there.’ Whatever you think the advantages are from a financial standpoint, I think they are dismal and demoralizing for a company that wants desperately to turn around and regain its reputation.”

This says all about her vision of the company. Her mission was to make sure that she works hard to have Xerox survive for the 95,000 who worked for it. The case says that Anne would sometimes visit three cities in one single day. This daily efforts was her mission to achieve the ultimate goal to get bak to Xerox its reputation again. “If this place is going to fail, it is not going to be because Anne Mulcahy slept.” This line says it all about her mission and her strategic leadership. 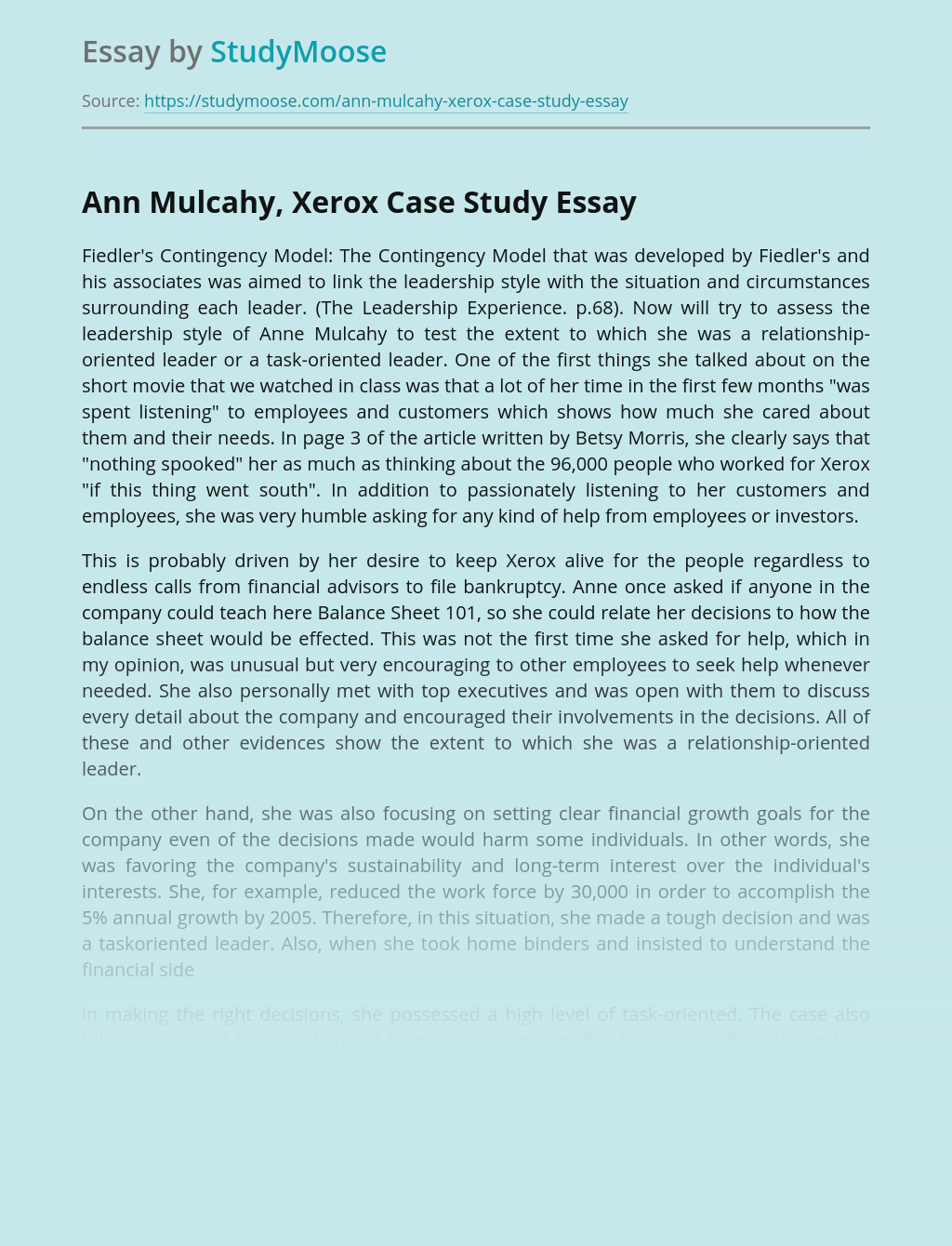