Animals Are Happy and Better in Jungle

“The Jungle” portrays the lower ranks of the industrial world as the scene of a naked struggle for survival. Where workers not only are forced to compete with each other but, if they falter, are hard pressed to keep starvation from their door and a roof over their heads. With unions weak and cheap labor plentiful, a social Darwinist state of “the survival of the fittest” exists.

The real story revolves around the integration and eventual disintegration of Jurgis Rudkis and his family, Lithuanian immigrants who move to the Chicago stockyards in hopes of a better life.

Don't use plagiarized sources. Get your custom essay on
“ Animals Are Happy and Better in Jungle ”
Get custom paper
NEW! smart matching with writer

Unfortunately, their hopes quickly disintegrate; like thousands of other unskilled immigrants at the turn of the century, financial necessity forces them into virtual slave labor in order to survive. For Jurgis and his family, the slave master is the ruthless and greedy meat packing industry, whose leaders value their workers no more than the animals they slaughter. The Jungle” shows the relationship between the animals that were being slaughtered and the workers who were slaughtering them, from very early in the novel.

It compares the workers to the animals who are penned up and killed every day in the stockyards, which are moved along on conveyer belts by machinery that cares nothing for their individual desires. In the monotonous killing of each of the hogs, “They had done nothing to deserve it; and it was adding insult to injury, as the thing was done here, swinging them up in this cold bl…

Frederick Douglass once said “Where justice is denied, where poverty is enforced, where ignorance prevails, and where any one class is made to feel that society is in an organized conspiracy to oppress, rob, and degrade them, neither persons nor property will be safe.

” Frederick Douglass was a runaway slave turned abolitionist, and while his history is quite amazing, what is even more intriguing is that this quote sums up the theme behind two books that have nothing to do with slavery or each other. One can conclude, therefore, that oppression, whether by law, in tradition, or by circumstance, is a universal theme.

It’s sting knows no bounds, geographical, racial, or otherwise. The African American slave suffers from the same plight as the impoverished immigrant and the indigenous peoples subject to the invasion of Christian missionaries. Oppression, as a result, is a tie that binds two very unique novels together, or perhaps, just maybe they are not so different at all. Their parallels can best be analyzed by ta… The issue of animal rights has been the topic of controversy for many years. There are various degrees of animal rights.

The beliefs range from the thought that animals should be left alone in their natural habitat to the thought that animals should be used for laboratory testing. I believe that protecting animal rights means otecting animals from harm and allowing them to live a happy life, whether in captivity or their natural habitat. People may have different beliefs on animal rights for household pets versus animals in the wild. One thing is certain, animals do have personalities and they do communicate. In her essay, “Am I Blue,” Alice Walker points out that she was unprepared for the expression in Blue’s eyes.

Blue was lonely and bored, and this could be seen by just looking into his eyes. In Vicki Hearne’s essay, “What’s Wrong With Animal Rights,” she notes the expression of creature comforts. The author points out that when animals, such as dogs, are at their happiest, they are experiencing creature comforts. Anyone who has been around animals knows the difference between when the animal is happy versus when it is upset. Wild animals are happiest when they are in their natural habitat. Today, many animals are in captivity, due to the fact that they are becoming extinct or due to some other factor.

I agree with the idea in the Melissa Greene essay. In her essay, “No Rms, Jungle Vu,” Melissa Greene explains how people created a zoo that was very close to the animal’s natural environment. This made the animals much happier and also allowed the visitors to the zoo to observe the animals at their natural behavior. “No Rms, Jungle,” points out that gorillas live in large groups in the wild, but most zoos put them in pairs. This showed an example how the gorillas act differently toward breeding and pointed out that successful breeding among the captive gorillas didn’t begin until they were housed in large family groups.

These are just a few examples of how we can see the different emotions of animals. Knowing that these animals have feelings and being able to see their different emotions, makes me wonder what kind of people do not agree with animal rights. The term, animal rights, means that animals do have rights, just as humans have rights. Animals, unlike humans, cannot speak. It is much easier for people to say, “They can’t even speak, they are just animals,” but we would never dream of saying something so harsh about a human who was not able to speak. In a way, we can compare animal rights to the rights of humans who have disabilities.

These people who have disabilities may not be able to stand up and speak for themselves, so they need to have a family member to protect their rights. If people are so unfortunate that they do not have any family, our government has put into effect plans that would provide these people with protection, which doesn’t always happen. So, imagine one of your relatives not being able to stand up for their rights and your not being able to help them. This is the daily life of an animal, if we, as humans, do not believe in animal rights. Animal rights also need to be defined in dealing with the scientific community.

In today’s world, animals are constantly being used for testing. We use animals for testing such things as cosmetics, the effects of household items, and different drugs and vaccines for disease prevention. Testing animals for the use of cosmetics or for testing household items, I do not agree with. Testing animals for the purpose of creating cures for diseases is a touchy subject. Animals are being killed every day as a result of this testing, and I do not agree with this, but at the same time, if testing a mouse’s reaction to a certain medication could lead to the cure of certain cancers, this would be positive.

Where do we draw the line? Some people believe it is okay to test a mouse or a rabbit, but not okay to perform testing on a monkey or a dog. We need to have restrictions in place that draw this line. Illustrating the different areas where animal rights may come into play, hopefully allows people to better understand the purpose of animal rights. Animals are creatures with personalities, emotions, and feelings, just as we humans. We need to do our best to try to protect these creatures from harm. If we, as humans, took the time to observe animals more deeply, we could probably learn some things.

Animals Are Happy and Better in Jungle. (2020, Jun 01). Retrieved from https://studymoose.com/animals-happy-better-jungle-new-essay 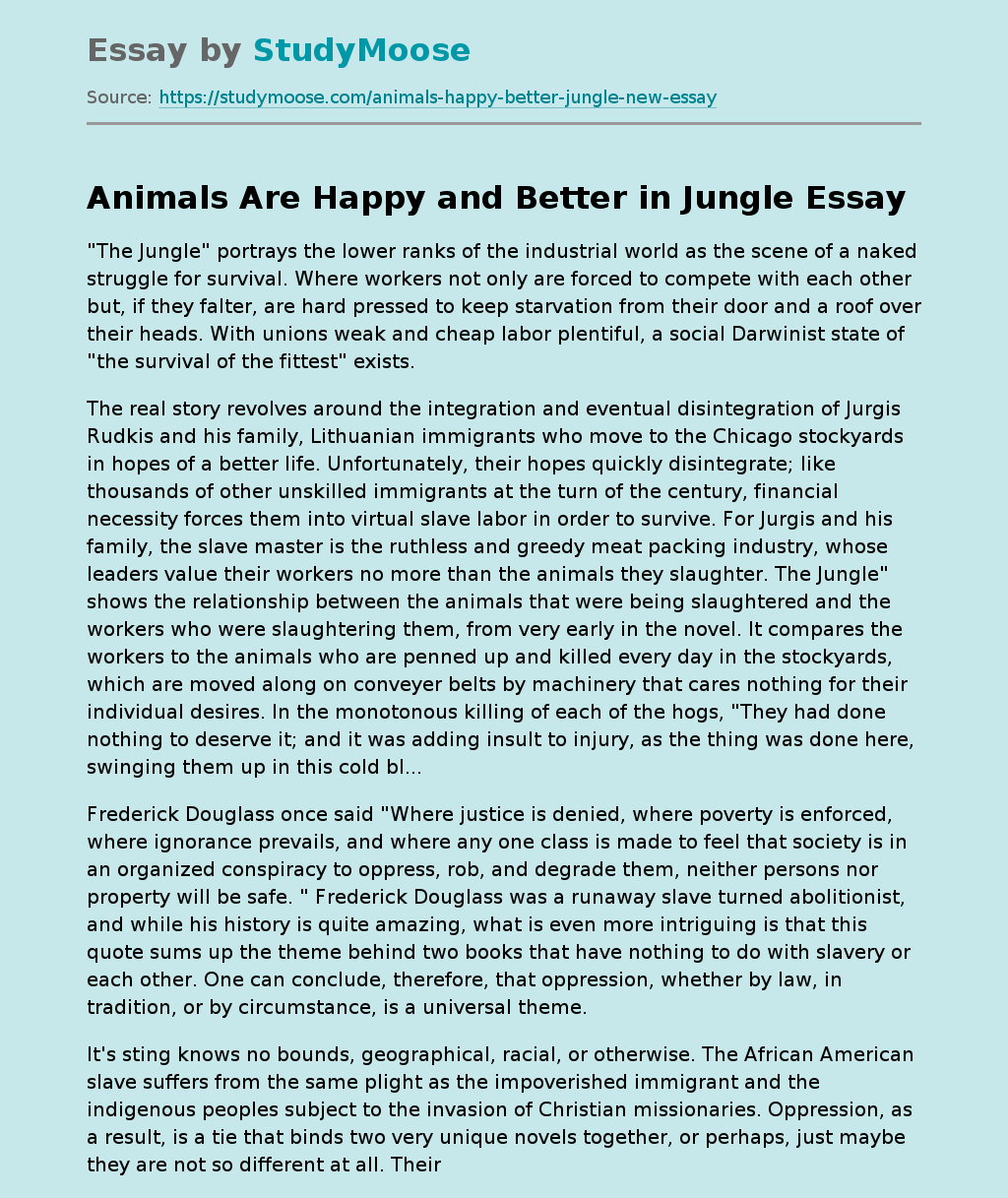