Today, I read something horrific in the newspapers. I had heard briefly about this topic earlier, but now, after reading this article, my eyes have been opened to the reality of this inhumane act. Animal testing is a completely immoral and cruel act that we humans are committing. How is it right for us to take innocent lives of animals to test chemicals and other such materials? The animals are not the ones who are going to be the users of the final product.

Don't use plagiarized sources. Get your custom essay on
“ Animal testing is a completely immoral and cruel act that we humans are committing ”
Get custom paper
NEW! smart matching with writer

It is technically murder and that is just animal cruelty.

You cannot treat animals with such disrespect and brutality. These experiments are usually done on rats or mice. Most scientists justify their experiments by saying that the lifespan of these common animals are very short, so how does it even matter? That is the most unjust thing I have heard in my life! A life is worth living and nobody has the right to take it away from you, be it a lifespan of a hundred years, or a lifespan of a meagre 5 days.

The population of many animals are decreasing rapidly and animal testing could just be one of the major reasons for this drop.

It would be even crueller to sacrifice young children or the elderly for such experiments. Medical advancements and adjustments can be made to substances so that there are no side effects. If there was no animal testing, the cure for polio would never have been found.

So, animal testing has really saved an innumerable number of lives in the world. And man is not so selfish after all! They have got some results for medical developments for animals as well. Unfortunately, the animal being tested feels the pain of the side effects, even if it is as brutal as death. We have to kill animals to save ourselves. Our medical situation depends on a sacrifice of an animal. On the flipside, look at all the pain and suffering the guiltless animals are going through. Some are not properly anesthetized and they feel even more pain.

There procedure is not the best that it could be. In the cases in which this is true, why would you even allow such labs to go through with these experiments? They should just be disallowed completely. Also, some of these drugs end up killing humans anyway even after they are tested. In these scenarios, the testing just ends up to completely pointless. It leads to the death of both the tested animal and the human. This faulty drug would contradict the whole point of having these tests on animals to prove their safety.

Even though most of these experiments are run on animals, the final test is usually run on a human for the exact results for humans. There have been cases where this human has had to face the side effects of the defective substance. I feel that testing it on humans is completely unethical. If it is immoral to test new drugs on animals, then it is totally wrong to test it on humans! If this ever happens, riots would engulf the streets. Now, that would not be a pretty sight. There are many people who are completely against this, without even thinking about the upside.

These activists are completely justified, in my eyes. Even though I believe that they are right to do this, I still think that there are some upsides. With all the medicines that we have today, if it wasn’t for animal testing, we would take all of these medicines at our own risk. But, we have the guarantee that it won’t hurt us due to the promise made by scientists who go through with the animal testing. Animal testing has brought the cure for polio, malaria, herpes, and many other such diseases. Millions of people had died, suffering from these gut-wrenching diseases before the cures were discovered.

Even though there are these discoveries that prove the advantages of animal testing, I still feel that these harmless animals shouldn’t lose their lives. This animal sacrifice seems almost ritualistic. In my opinion, animals should not be killed off or experimented on. If another way is found to experiment without harming any living things, I think that is the best way to determine the level of danger that a substance possesses. This is what I feel about this complex topic. How, it is going to be solved at the end, is not my choice. Goodnight, diary. Until next time.

Animal testing is a completely immoral and cruel act that we humans are committing. (2020, Jun 01). Retrieved from https://studymoose.com/animal-testing-completely-immoral-cruel-act-humans-committing-new-essay 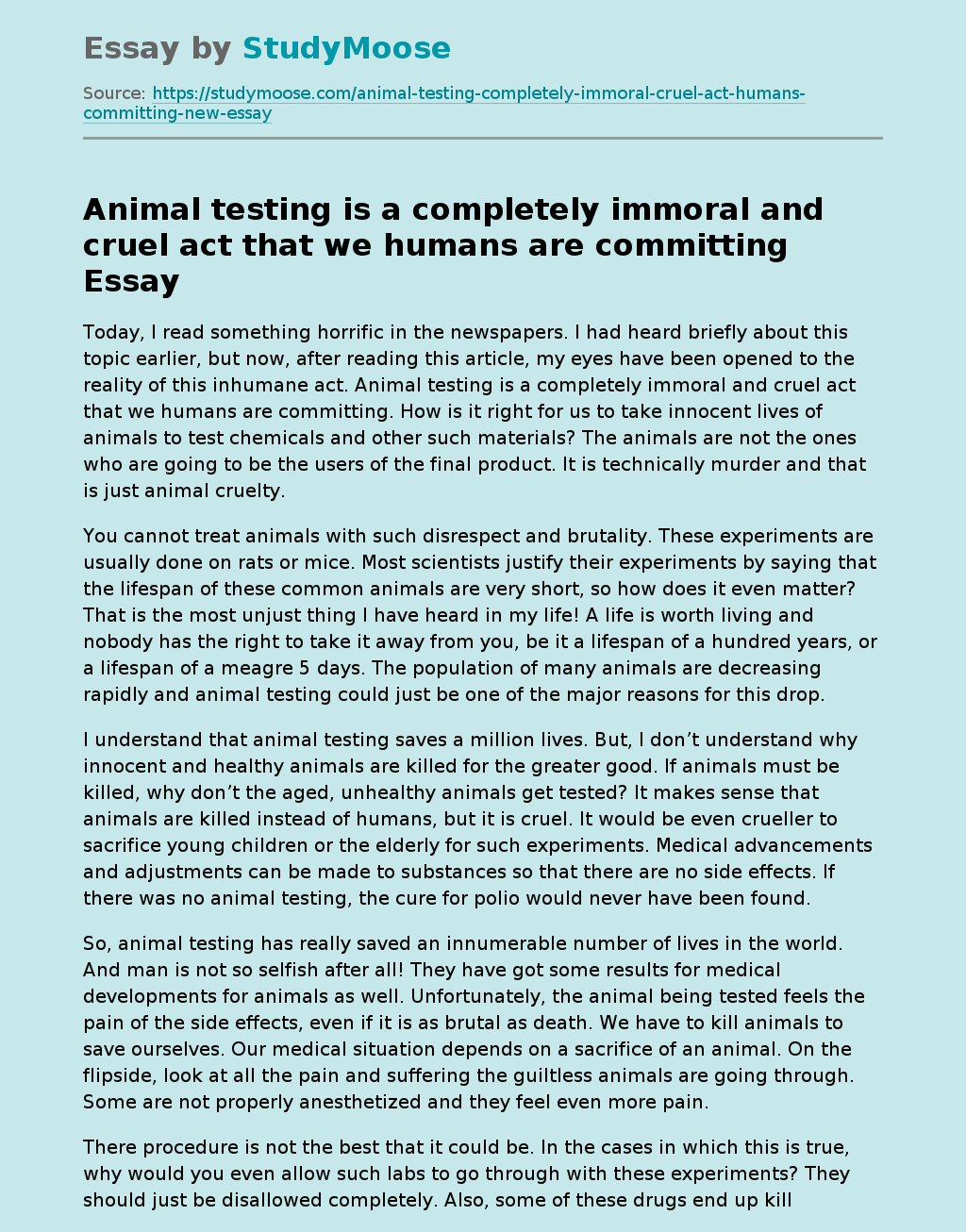