Animals have been used in medical research for centuries. In a recent count, it was determined that 8815 animals were being used for research at MSU, 8503 of them were rats, mice, hamsters, and gerbils. The strugle against animal research has been one of the most debatable issues of the decade. Even though most researchers need to do experiments on animals in order to achieve medical advances, animal research should not be allowed because it is cruel and inhumane, it is not always accurate, and often unnecessary.

Don't use plagiarized sources.
Get Your Custom Essay on Animal Rights Thesis Just from $13,9/Page

The first reason why animal research should not be allowed is that testing on animals is cruel and inhumane. According Clifford Sean in his book, “Animal Research”, animal right activists have gathered much information that has closed down laboratories that violate anti-cruelty statutes. This includes a 1984 video tape stolen from the University of Pensilvania Head Injury clinic. The video tape involves anesthetized baboons receiving blows to the head to break their necks and cause brain damage.

In the same book Alex Pacheco tells about the conditions he witnessed in a monkey laboratory, and expresses how horrified he was by the painful experiments these monkeys have to go through. In this laboratories young chimpanzees are infected with deseases, put into tiny cages, and left ther for several years. This inhumane treatment should be used on brakers of the law instead of these inocent, unprotected animals. Animal research it’s cruel and inhumane, but it’s also sometimes inaccurate.

The second reason why animal research should not be allowed is because it’s not always accurate. According to Bernard Rollen in his book, “Animal Abuse and Human Morality”, scientists in the 1960’s concluded from many animal experiments that the inhaled tobacco smoke did not cause lung cancer. We all know that this is totally not true and that smoking is a large contributor to lung cancer. Another example of the inaccuracy of animal research is that the drug Milrinone, which raises cardiac output, increased survival in rats with artificially induced heart failure; humans with severe chronic heart failure taking this drug had 30 percent increase in fatalities. Also in the same book, the antiviral drug Fioluridine seemed safe in animal experiments but also caused liver failure in 7 of 15 humans taking the drug. Five of these patients died as a result of the medication and the other two received liver transplants. Besides being cruel and inhumane, and sometimes inaccurate, animal research is also often unnecessary.

The third reason why animal research should not be allowed is that it’s often not necessary. “There are whole countries that don’t use healthy animals to train veterinarians or teach surgical techniques,” said Liska O’Connor in her book, “Save Them, don’t Abuse them”. In England they only use sick or injured animals and do a lot of work on animal cadavers. Humans can speak and give their concent, monkeys and dogs can’t. Many people have said they are willing to try out new drugs, but somehow researchers prefer monkeys.”If you are preaching reverence for life, you are preaching reverence for life, period. And violence is the opposite of reverence for life”, said Liska O’Connor in the same book.

Most of what we do to animals we would not do to people. This is only because humans have rights, the same rights we keep taking away from animals. Because it’s cruel and inhumane, it’s not always accurate, and often unnecessary, you can see why animal research should not be allowed. 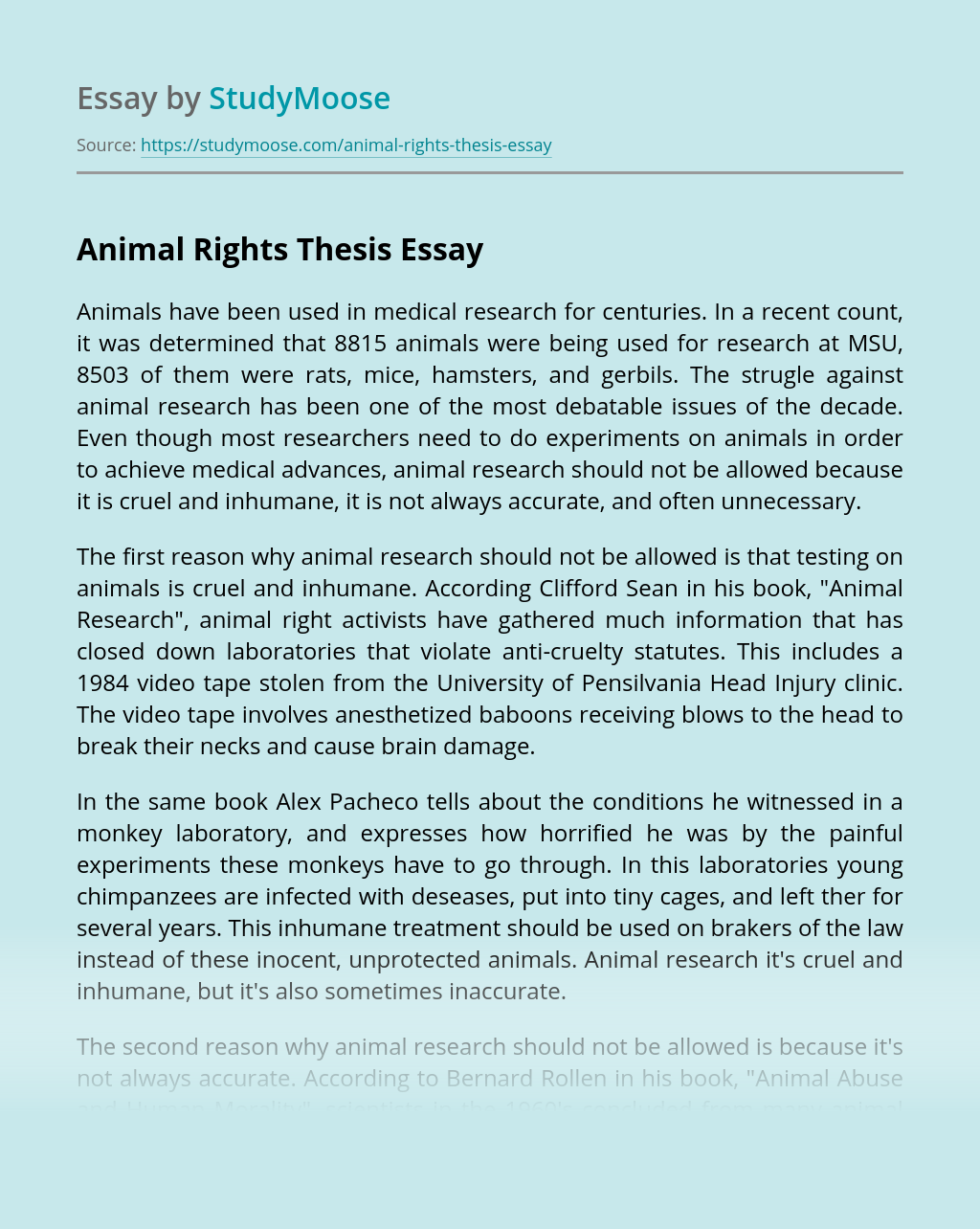 What Is Media Literacy?

What is Media Literacy? Media literacy is the ability to sift through and analyze the messages that inform, entertain and sell to us every day. It’s the ability to bring critical thinking skills to bear on all media— from music videos and Web environments to product placement in films and virtual displays on NHL hockey... VIEW ESSAY

View sample
Get Essay
The Pardoner’s Tale: Review and Assess

You know it when you see it. It is not that hard to tell whether a piece of writing is good or bad, you just have to read it. And it is pretty important to be able to discern the difference, if you ask me. But things get more challenging if you have to explain... VIEW ESSAY

A person is considered ‘handicapped’ or ‘physically challenged’ when he is not an ordinary person with all limbs. A disabled person is one who suffers from the loss or impairment of a limp or deformity in physical or mental capability whether due to nature’s foul play or an unexpected unfortunate accident. Disabled persons are of... VIEW ESSAY