The book “Animal Farm” by George Orwell is an allegory of the Russian Revolution, the Soviet Union era and when Russia evolved into communist Russia. Orwell creates this allegory to illustrate the theme that you must never mistake your leaders for liars. Liars know how to turn things around and make it seem like it’s all your fault. Orwell proves this theme by using Napoleon to represent Joseph Stalin in the Russian war, both were leaders, but not the type of leaders you would like to be led by.

They both lied behind peoples backs which just made everything tough for them.

The first allegorical connection that Orwell uses to portray his theme is when the boar Napoleon is used to demonstrate a leader whom lies to their people like Stalin did. Orwell states on page 104, saying “Two days later the animals were called together for a special meeting in the barn. They were struck dumb with surprise when Napoleon announced that he had sold the pile of timber to Fredrick… throughout the whole period of seeming friendship with Pilkington, Napoleon had been in secret agreement with Fredrick” This demonstrates how leaders can be deceitful and lie to even their own people.

Not only was Napoleon lying to the animals but also to the humans, trying to trick them. This is shown similarly to the concept on Biography.com saying“He continued his work in hiding, raising money through robberies and kidnappings”. This shows a connection because both Stalin and Napoleon were hiding things yet continued to carry on the lies.

Orwell uses the animal farm Barn was to represent when and where leadership, lies and destruction occur just like socialism in the Russian Revolutionary which also symbolizes the kremlin which was a citadel in Russia. The barn was where the animals would have meetings which mainly revolved around revolution with the humans. On page 28 Orwell writes “only get rid of man, and the produce of our labor would be our own. Almost every night we could become rich and free… work every night and day, body and soul, for the overthrown of humans”. The animal farm barn was used to discuss plans, agree on things and help each other out but that’s where everything went wrong. Lies took over the barn. The symbolization of the Barn relates to Biography’s.com description of Proletariats, they were leaders and wanted power for their people but just ended up being treated unfairly. They were loyal to any cause, “It only denotes a person who does not own any means of production; his or her source of income is to sell his own work force”, this demonstrates a connection because both the Barn and proletariats were taking advantage of, both wanted to be known/used for good but ended up with the opposite.

The most impactful allegorical connection to the theme that Orwell uses Squealer to represent propaganda. Squealer is portrayed as the helpful pig who started to speak for Napoleon ever since Napoleon said he didn’t want to talk to the animals anymore on page 86, “frequently he (Napoleon) did not even appear on Sunday mornings, but issued his orders through one of the pigs squealer”. Squealer took advantage of speaking for Napoleon and convinced the farm Napoleon was dying even when he wasn’t, he was just getting over a hangover. This connects to the description of propaganda on Biography.com saying “Political posters could present symbols in a simple and easily identifiable way.” Propaganda connects to the description of squealer because both share information that could be false or true, no one will really know. They both point out what they want to be heard. Squealer wanted the animals to think Napoleon was dying and propaganda wants everyone to thinks what they are portraying is correct.

The allegory that Orwell portrayed is one of lies, war and leadership to show that war isn’t all about fighting others it’s about your team and you always need to make sure that you take good care of your people. Big or small lies are lies. Orwell does this by using animals to symbolize people in the Russian Revolution to show how things took place and happened. Orwell wants people to know the struggle of war and to be careful with who you put your trust into. 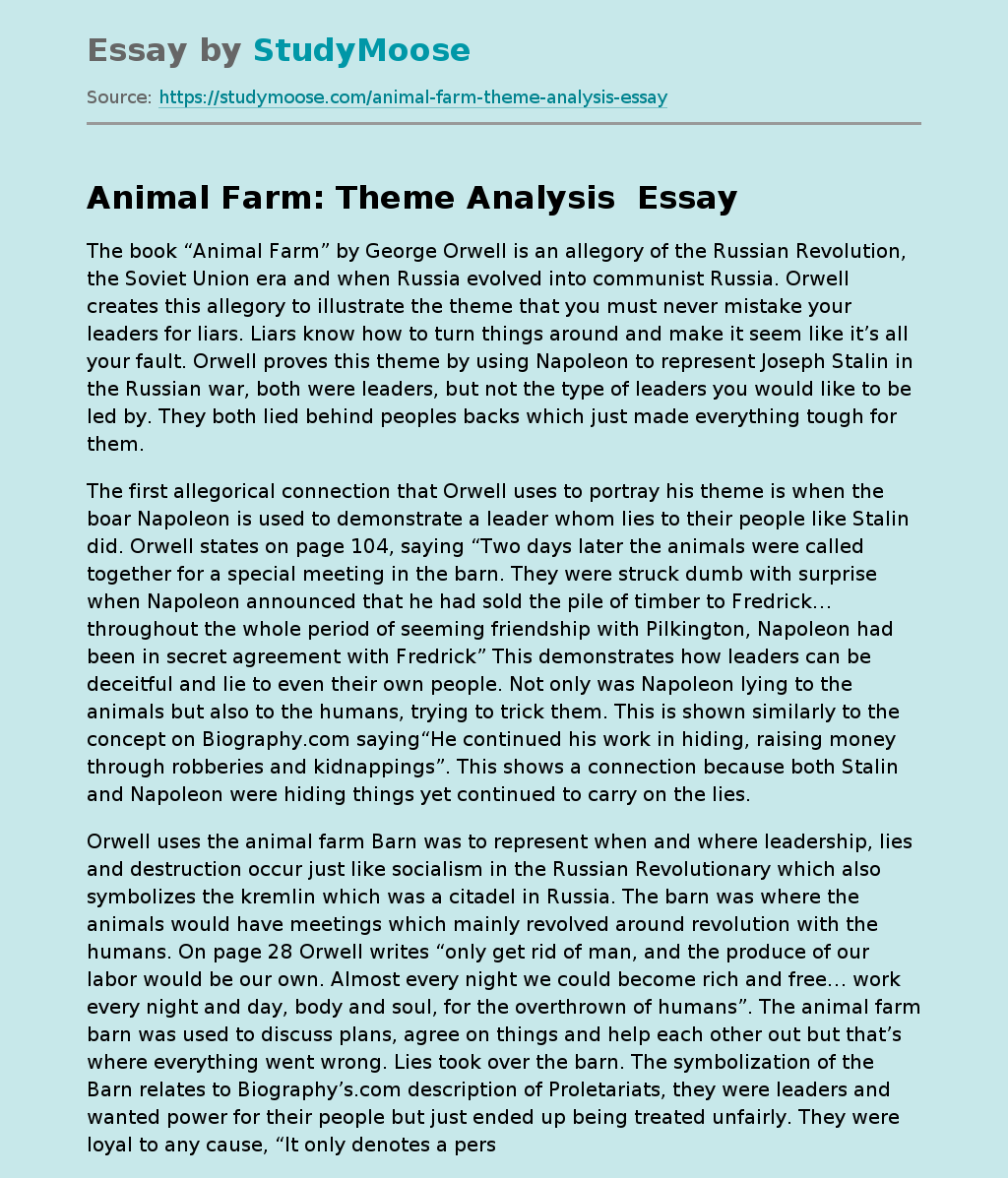