1. The animals are doing a lot of work because they have to get the windmill done. 2. Napoleon decides to trade with the neighboring farms because the can’t afford to let the windmill go undone and the animals are starving. 3. The animals’ reaction is that they are shocked but decide it is necessary that Napoleon trades with the neighboring farms. 4. The windmill is destroyed by the wind that knocked it over. Napoleon blames Snowball because he wants to make Snowball seem like an even worse person.

5. Napoleon orders that the hens’ eggs be sold because the farm needs more grain and for hundred eggs a week is what they need to get the grain they need to survive until the summer. 6. The way Napoleon acts is that he makes it where anyone who takes the hens food or any supply will be punished and he needs the eggs. 7. The animals confess to being traitors because they believe that they deserve what the other animals got from them.

1. The purpose is to show that the animals are not living off worse than before they rebelled against Jones. 2. Napoleon is becoming more and more like a typical dictator because he is taking over the animals’ natural rights and he is making it where they can’t do certain things. He’s becoming just like Jones. 3. Napoleon outwits himself by making sure he had money up front aside from a pay-me-back and when he does that, he gets counterfeit money instead.

5. The whiskey incident is when Napoleon drinks too much alcohol and is on his deathbed but he soon recovers. 6. The living conditions are harsh considering the pigs and dogs can take what they want because they have to vicious dogs to control the other animals. 7. Napoleon allows Moses to come back and tell his stories because it keeps the animals working hard and it keeps them from realizing what a jerk and over powerful man Napoleon is becoming and it
keeps them from having thoughts of rebellion.

1. The changes that the years have brought to the farm are that Jones has died and it may not be as bad as Jones’s time but it’s well on it’s way there. 2. Orwell makes fun of bureaucracy by exaggerating the way Napoleon is becoming human. 3. The animals feel that their farm is better off than it was before the rebellion but they are still not getting what they deserve from the upper animals. 4. They kill off the animals because they betrayed them.

5. The new commandment is All animals are equal. But some are more equal than others. It has been true from the beginning because the pigs took over in the beginning and they started taking more and more of the animals’ rights away as they went . They started to believe that they were better than everyone else. 6. The pigs’ appearance starts to change when they start walking on their hind legs and at the end, the pigs become human; their faces change completely. 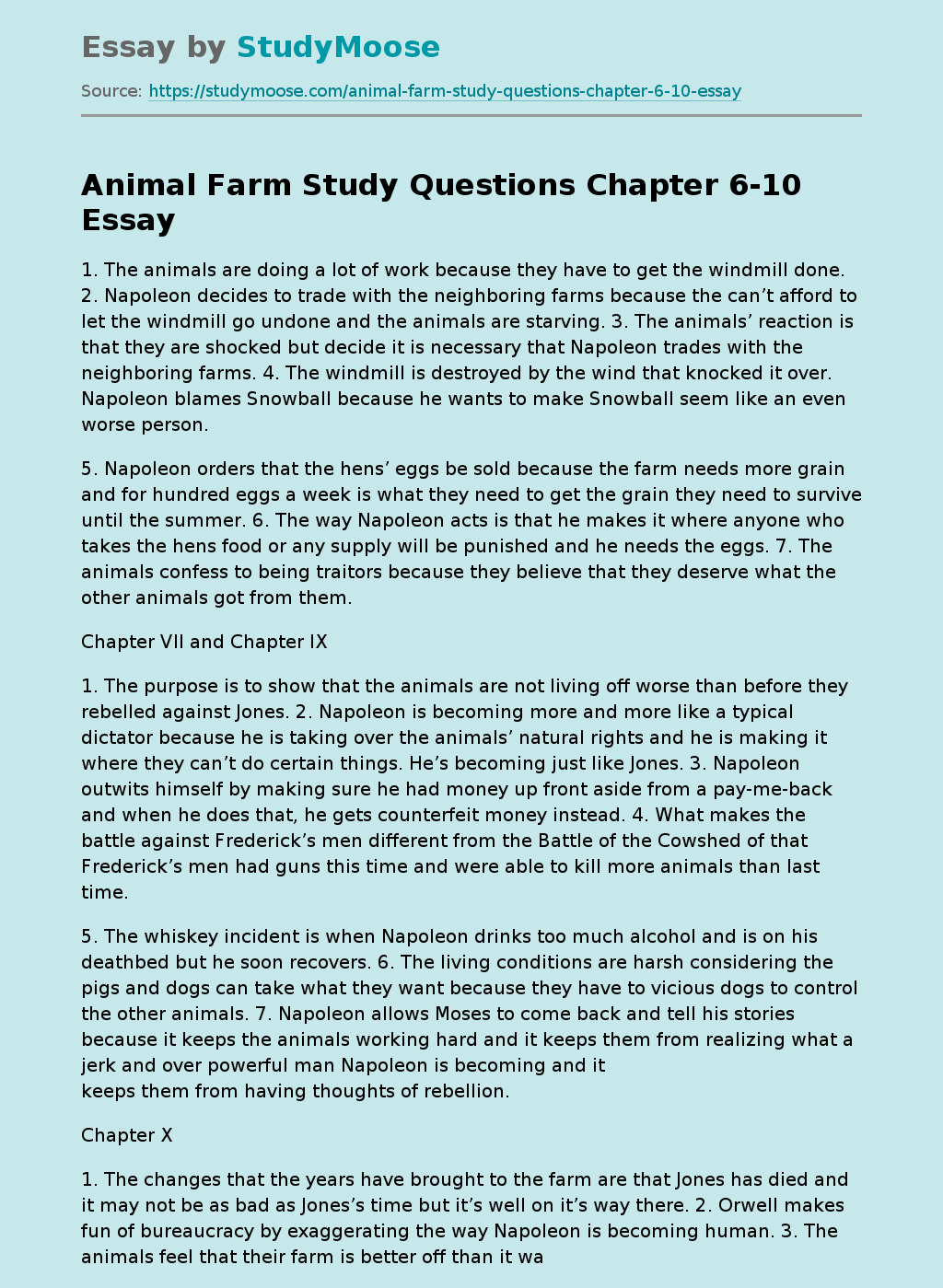