George Orwell’s satirical fable Animal Farm perfectly puts these famous words first quoted by Lord Acton in a letter to Bishop Mandell Creighton in 1887, into a real life scenario. In actual fact Acton stated in his letter: “Power tends to corrupt, and absolutely power corrupts absolutely. Great men are almost always bad men. ” No doubt that when Lord Acton wrote this letter, he was referring to an event that had occurred during his time as he, like Orwell, is a social commentator and was most probably reflecting on a leader that had let power get to his head.

Don't use plagiarized sources. Get your custom essay on
“ Animal Farm Essay ”
Get custom paper
NEW! smart matching with writer

This phrase however, based on a particular event as it is, has gone on and become a timeless and ever resurfacing trait of man. Acton’s Comment is quite vague however it goes into the very heart of the dynamics of political power and its chance of corrupting. George Orwell in his novella Animal Farm warns of this trait of man and tries to teach that man is weak and those in the position of power will give in to corruption if give the chance to.

In the purpose of this essay I will describe the corruption of the Animal Farm movie adaptation and who after gaining total power over the book the producers completely corrupted it.

This essay will describe how the Animal Farm (the movie), was corrupted in the purpose of setting, character and theme. For a long time producers have been making filmic adaptations of book hoping to cash in on their popularity.

However in most cases producers have been changing, shortening and to some point corrupting whole movies just to suit their own needs. Unfortunately the filmic adaptation of Animal Farm has not been spared from this awful trend that seems to follow all classical books. It has been corrupted beyond recognition and bears no meaning.

The producers have taken a book that is full of meaning, ripped it apart and turned it into a happy g-rated book with no meaning at all. What is incredibly ironic is that when George Orwell put out his novella he wanted to educate the masses and teach them about the flaws of communism and how man could become corrupt is given too much power. On the other hand the producers have used his book to send out the exact opposite message; they have used the book to tell ‘children’ that communism is wrong and totally unachievable.

In other words the producers have taken a book that sends out the message ‘power corrupts’ and then, after gaining total power of it, have corrupted it themselves. George Orwell, in his novella, has not gone into great detail when explaining the setting. Whereas on the other hand, the movie adaptation of the film has gone into great detail with the settings and to what feelings they create. The producers have done this as this is a film meant for kids and the easiest way to tell kids that something is not right, apart from just telling them, is to show them.

The producers even went to the trouble of hiring 80 animators just to create the scenery and totally manipulate children’s views. An example of this is with the movie’s description of Manor Farm, which is later called Animal Farm. In the book George Orwell does not go into great detail about the setting but does describe it as a farm that was not looked after too well but was not that bad. In the movie adaptation however, the farm is shown differently. The farm is shown as an unhappy place that “had fallen on evil days”.

They have used dark dreary colors to portray the farm and make it somehow look sinister. They producers have done this so that they can influence the opinions of children and make then, from the offset believe that the farm under Jones’s rule is a bad place. That if you look at it symbolically implies that the country of Russia under the rule of the Tsar is a bad place. Another example of this is when, just before and directly after the revolution the color patterns change once again.

This time the farm is shown as a bright and colorful place that is full of joy and excitement. This change in patterns is obviously to tell kids that the revolution is a good thing. The only other real change in scenery comes near the end of the movie. This is when the producers switch back again to the dark and gloomy theme implying that the animals have yet again gone into a bad time. The characters that have been included in the movie are corrupted just the same as the setting. I would even say that the characters are even more corrupted then the setting.

For starters many of the characters that George Orwell included in his book have been discarded. The two characters that have been corrupted the most are the characters of Snowball and Napoleon. In the book George Orwell says this for snowball: “Snowball was a more vivacious pig than Napoleon, quicker in speech and more inventive, but was not considered to have the same depth of character. ” In the movie Snowball is shows as a vicious pig that has fangs and trotters that look very much like claws. The movie also depicts him as a pure white pig.

Napoleon is much like snowball as he too is depicted to have fangs and claws the only difference between him and snowball is that he is blackish in color and is a bit plumper. This seems to imply that snowball in the better of the two. All of the remaining characters have also been corrupt as in the book they were depicted as being able to speak, but in the movie the animal’s, apart from the pigs, are shown as not smart enough to talk. The only animal, apart from the pigs, in the whole movie that talk, are the sheep.

This is another example of corruption as in the book the sheep are represented as the dumb followers that actually did not know what was happening. In the movie however, the producers make the sheep able to speak, clearly implying that the sheep are smarter than the other animals. Another character whose role has been corrupt and changed is Benjamin. This is what George Orwell said of him in his book; “Benjamin was the oldest animal on the farm and the worst tempered. He seldom talked, and when he did, it was usually to make some cynical remark… Alone among the animals on the farm he never laughed.

If asked why, he would say that he saw nothing to laugh at. Nevertheless, without openly admitting it, he was devoted to Boxer. ” In the movie Benjamin is described as a hard worker that does all he can to help the farm. This is totally out of character for Benjamin. From reading the book you can clearly tell that Benjamin does no more than he is required to do and is very retracted from the rebellion. The producers have clearly Benjamin like they have to imply that he is hero. The plot in the Animal Farm movie adaptation has also been corrupted.

The plot is the least corrupted part of the whole movie which is a surprising fact. Only a few factors from the book, in the whole movie, have been corrupted. One of the minor things that have been changed is the fact that the animals are never taught the tune of “Beasts Of England”. In the movie it is shown that the animals already know the tune. An interesting fact to note is that the actual words of the song are never sung but are replaced by a tune. Another thing that has been corrupted is the seven commandments.

Some of the rules that were in the original book have been left out of the movie. These rules are; “whatever goes upon two legs is an enemy, No animal shall wear clothes” these rules have been omitted from the movie for no obvious reason. One surprising thing that has been added to the rules however, is Napoleon’s maxim, “four legs good, two legs bad. ” This, like the omitted rules, has no reason, beyond the producers wanting to simplify the movie for the kids watching it. The thing that has been the most corrupted in terms of plot, is the ending.

In the original book Benjamin is left “looking from pig to man, and from man to pig, and from pig to man again; but already it was impossible to say which was which. ” Whereas is the movie Benjamin sends out a battle cry and leads the animal into a counter-revolution. This obviously happens as the producers believe that having a happy ending would please the children that were watching. The motto “Power Corrupts, Therefore Absolute Power Corrupts Absolutely” may have just been a random phrase, said by a random person, at a random time, but it has become one of the phrases that defines our planet.

From the corruption of George w. Bush in the Global War Against Terrorism, to the more serious corruptions of Saddam Hussein and the Iraqi government. One thing is for certain, no matter where we go, where we run, corruption will always follow is there is any power to be gained. 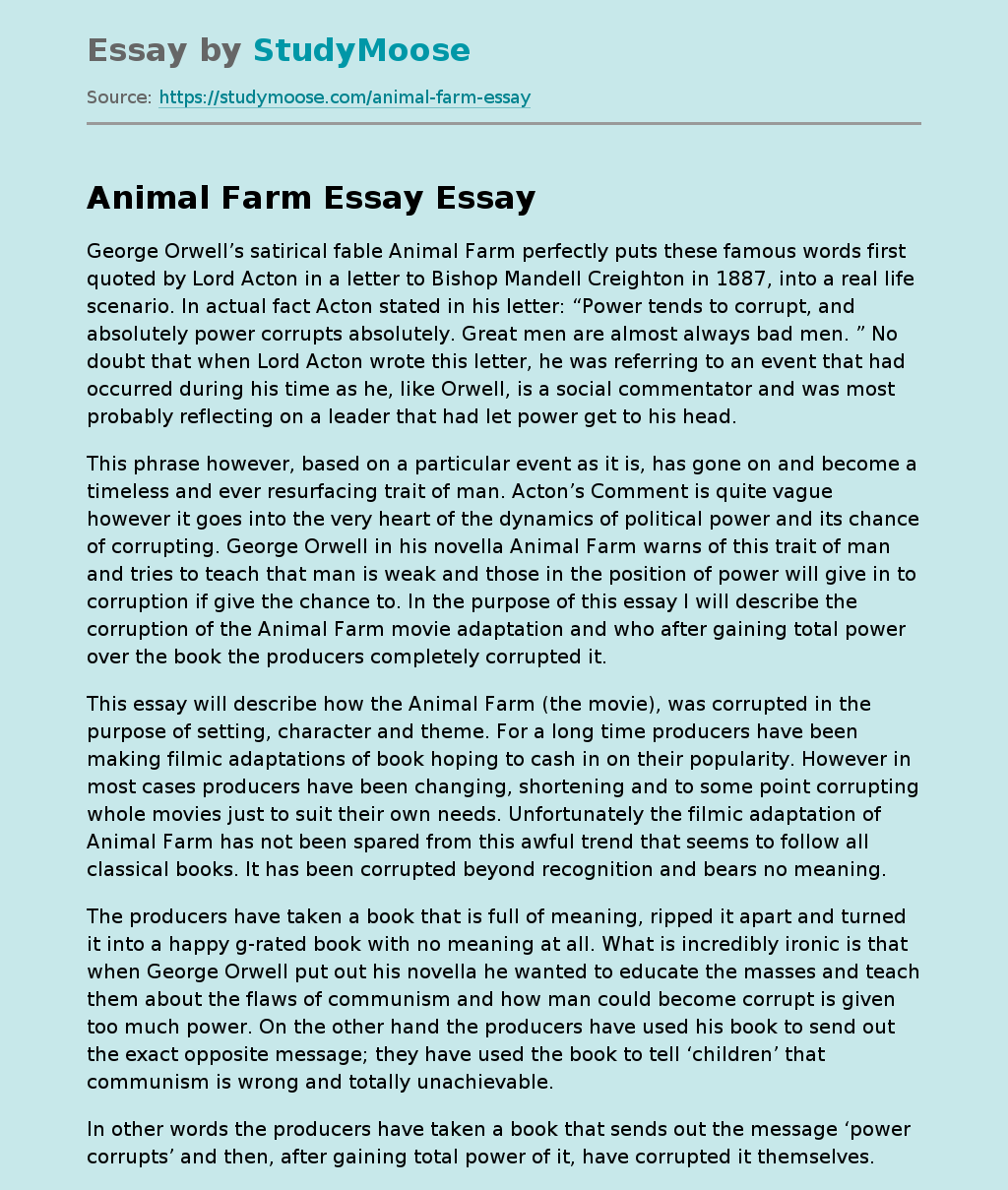