"Animal Farm" comparison of the book to the film

Animal Farm is a novel about farm animals running a farm and becoming self sufficient. It is a story with great detail and is a very good book to read because of it surprising events. If you have seen Animal Farm the movie, you would feel completely different. The movie has far less detail and events to make it as interesting as the book.

Don't use plagiarized sources. Get your custom essay on
“ “Animal Farm” comparison of the book to the film ”
Get custom paper
NEW! smart matching with writer

Though the story is basically the same, the lack of details makes the movie dull. One thing that can make a book good is characters. In the book, there were many more animals in the farm. The movie did not show many animals except for the main animals. Even thought this is a small difference, it can be noticeable. In the book, Mollie was a character. When she betrayed the animals by being with a human it gave you a feeling that there were more animals that could be traitors.

In the movie since there was no Mollie, you did not even have a feeling of suspense for what was going to happen later on. In the book, there was many surprises that shocked me.

One of those surprises was that Napoleon wanted Snowball ousted. Though Napoleon did not like Snowball, the wasn’t really any evidence that he would try to kill Snowball. In the movie, Napoleon, had a bad image already. He had a mean look and shoved his way in front when Old Major gave his speech.

Beasts of England was hummed when the animals sang it. When they could talk, the words represented the hate they felt for the humans and the injustice they felt was done to them. This is important because this greatly motivated the animals to rebel. If they just hum the tune and call it Beasts of England, it takes away from the mood of the story. Another reason speech is so important is that in the book, animals sometimes questioned authority. Boxer had once questions Squealer’s actions. It also made it so the regular animals besides the pigs could not communicate to each other and trying to guess their feelings was not the easy.

The movie had a few more differences. The movie showed Mr. Jones being killed in the windmill explosion. The book showed him dying at a relative’s house. The book did not show his death till the end so that before that, you might have thought he would attack again. The movie show the windmill blown up once when the book showed it being destroyed twice. Making it destroyed twice show the animals hardships when they had to do many things over.

One last difference was that in the end, the animals finally rebelled. This was a bad ending for that kind of story. The book showed it as a sad ending. If the animals rebel, there is a small feeling of happiness for the animals. This book was meant to show you that not everything ends as a happy ending. Animal Farm was a good novel. Animal Farm the movie was a bad rendition of the movie. It lacked in suspense, surprise, and mood. Though the story is the same the details that help the story lacked in the movie. Animal Farm, the novel, is a lot better than its movie version.

"Animal Farm" comparison of the book to the film. (2020, Jun 01). Retrieved from http://studymoose.com/animal-farm-comparison-of-the-book-to-the-film-new-essay 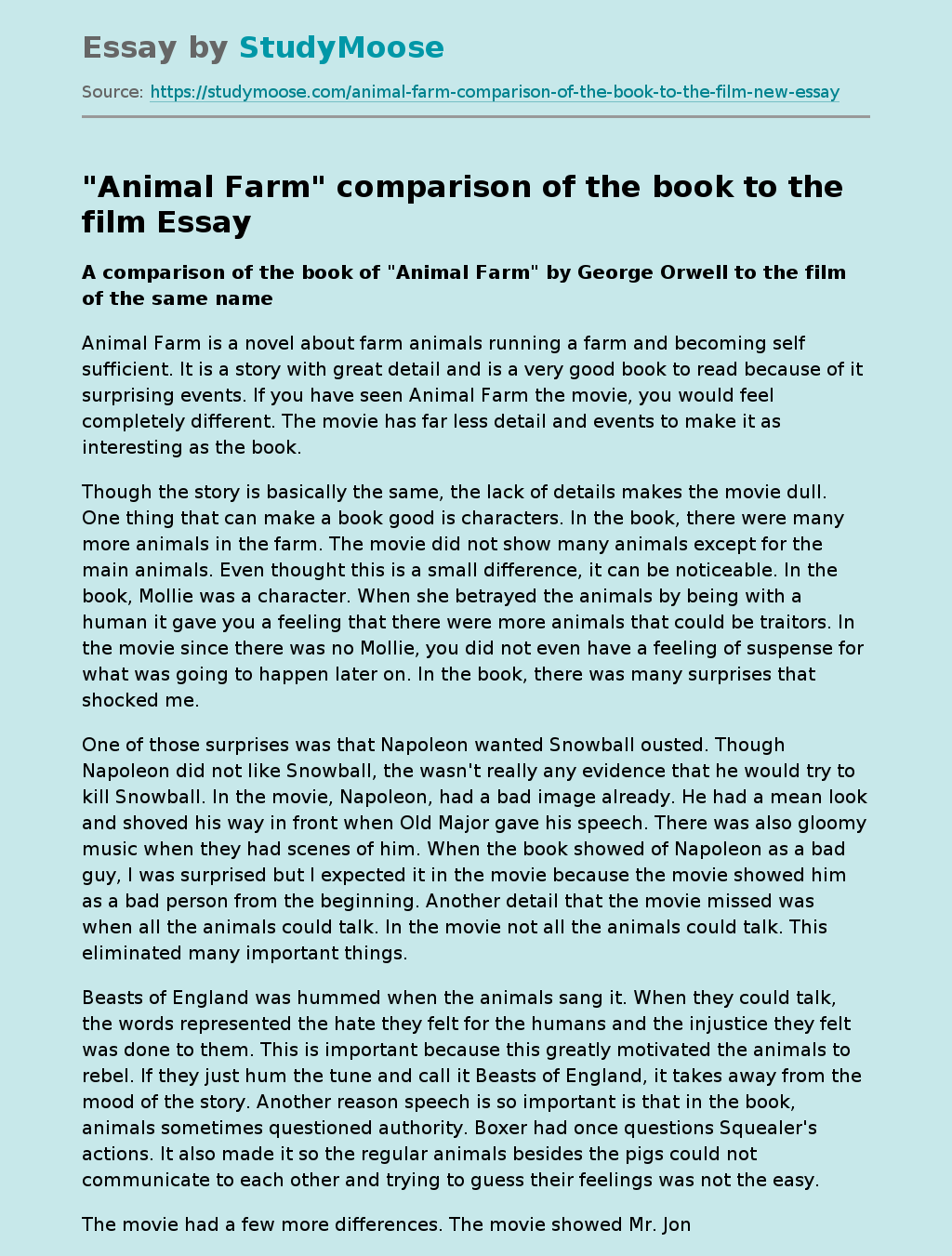