Animal Farm and Lord of the Flies

In 1887 Lord Acton wrote in a letter to Bishop Mandell Creighton, “Power tends to corrupt, and absolute power corrupts absolutely.” It has often been noted that this is the primary theme in both Animal Farm and Lord of the Flies. In addition, these books share two sub-themes related to this primary theme. One sub-theme is that people will often abuse power when it’s not earned. The other is that when given the opportunity people will often degrade others to ensure their own security.

Don't use plagiarized sources. Get your custom essay on
“ Animal Farm and Lord of the Flies ”
Get custom paper
NEW! smart matching with writer

Both books rely heavily on symbolism, as well as the actions of their characters, to express these ideas. Consequently, both these novels show us what a frightening place the world can become if people ignore the principles of civilization as we know it.

In both books, for different reasons, the characters create their own governments, and some of them soon begin to usurp and abuse power. For example, in Animal Farm seven commandments were written on the wall, a few of them were: “No animal shall sleep in a bed, No animal shall kill another animal, No animal shall drink alcohol.

” When one of the pigs, named Napoleon, took over he gradually changed the commandments. For instance, he changed the commandment “No animal shall kill another animal.” to, “No animal shall kill another animal without cause.” In Lord of the Flies there are several examples of characters abusing power. One of the characters, named Ralph, had originally started a democratic form of government. Two of the boys, Roger and Jack, eventually started there own form of government and took over.

Jack fell in love with his new found power and became dictator to the boys. He even started a hunt to kill Ralph simply because he felt Ralph was a threat to this power.

Because several of the characters in both books were insecure, they would often degrade others to improve their own security. This occurred in Animal Farm several times. For instance, there were two characters who always seemed to disagree (Snowball and Napoleon). Whatever one said the other would put it down or find something wrong with it, even if he actually agreed. Napoleon even urinated on Snowball’s plans for a windmill and ruined them. In Lord of the Flies there are several examples of insecure characters downing others to improve their own security. For example, Roger, Jack, and even Ralph make fun of one of the other boys they call “Piggy” because he is overweight. Roger is so insecure he even kills Piggy because Piggy makes him feel threatened by contradicting his ideas and putting forth his own ideas that were sometimes better than Rogers.

These books are both amazingly written and similar in several ways, but there is one major difference. The two books end with completely different views of civilization. Animal Farm ends with the animals not being able to tell the humans and the pigs apart, showing that evil had won. However, in Lord of the Flies, Ralph realizes when he sees the pig’s head (which is used to represent evil) in its pristine state, that even in all this savagery and evil some good may occur. Right after he realized this, a ship pulled up and rescued the boys. The themes of both books are true to the dark side of human nature. Golding holds out a tiny thread of hope; Orwell lets us see the bad things that could happen and leaves us to figure out how to prevent them.

Animal Farm and Lord of the Flies. (2016, Jun 23). Retrieved from https://studymoose.com/animal-farm-and-lord-of-the-flies-essay 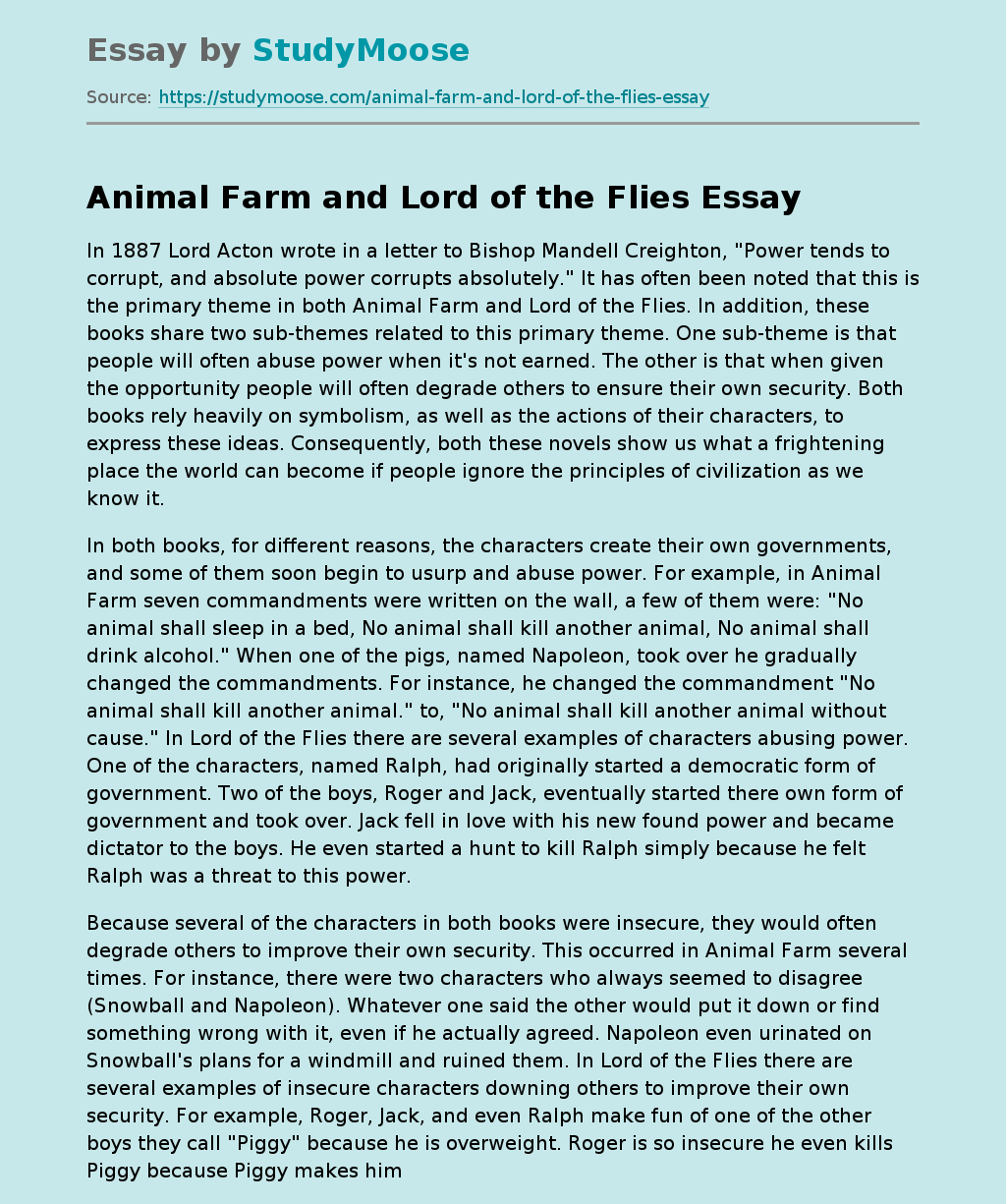