Animal Farm Analysis Setting:- somewhere in EnglandPoint of view:- told by an all-knowing narrator in the third personTone: Tone borders on pessimism, politics, and social justice.

Story:- Old Major, calls all animals to a secret meeting, he tells them about his dream of a revolution against the cruel Mr. Jones- Major dies, but the speech gives the more intelligent animals a new outlook on life- the pigs, who are considered the most intelligent animals, instruct the other ones – Napoleon and Snowball ( Napoleon is big, and although he isn’t a good speaker, he can assert himself.

Don't use plagiarized sources. Get your custom essay on
“ Animal Farm Analysis  ”
Get custom paper
NEW! smart matching with writer

nowball is a better speaker, he has a lot of ideas and he is very vivid. Together with another pig called Squealer, who is a very good speaker, they work out the theory of ‘Animalism’. )- the rebellion starts some months later when Mr. Jones comes home drunk one night and forgets to feed the animals- the animals destroy all whips, nose rings, reins, and all other instruments that have been used to suppress them- the animals celebrate their victory with an extra ration of food- the pigs make up the seven commandments, and they write them above the door of the big barn.

Mr. Jones: – The often drunk farmer who runs the Manor Farm before the animals stage their Rebellion and establish Animal Farm. Mr. Jones is an unkind master who indulges himself while his animals lack food.

Napoleon:- a pig who emerges as the leader of Animal Farm after the Rebellion- based on Joseph Stalin, Napoleon uses military force (his nine loyal attack dogs) to intimidate the other animals and consolidate his power- in his supreme craftiness, Napoleon proves more treacherous (mas traidor) than his counterpart, Snowball- he is compared to Stalin in a way that they both set themselves up as dictators with total power over the government and had special organizations to expel or execute anyone who rebelled against them- Napoleon emerges as an utterly corrupt opportunist- never shows interest in the strength of Animal Farm itself, only in the strength of his power over it- the only project he undertakes with enthusiasm is the training of a litter of puppies, he educates them for his own good: they become his own private army or secret police, a violent means by which he imposes his will on others- represents the political tyrants that have emerged throughout human history and with particular frequency during the twentieth century.

Snowball:- he challenges Napoleon for control of Animal Farm after the Rebellion- based on Leon Trotsky, Snowball is intelligent, passionate, eloquent, and less subtle and devious than his counterpart, Napoleon- similar to Leon Trotsky in that he is a meticulous planner, freely sharing his ideas to make life better for all animals on the farm- he seems to win the loyalty of the other animals and cement his power- Snowball emerges as a fervent ideologue who throws himself, heart and soul, into the attempt to spread Animalism worldwide and to improve Animal Farm’s infrastructure- his fervent, single-minded enthusiasm for grand projects such as the windmill- his idealism leads to his downfall. Relying only on the force of his own logic and rhetorical skill to gain his influence, he doesn’t compare to Napoleon’s brute force.

Boxer:- cart-horse whose incredible strength- dedication and loyalty play a key role in the early prosperity of Animal Farm and the finish of the windmill- quick to help but rather slow-witted- he shows much devotion to Animal Farm’s ideals but little ability to think about them independently- he naively trusts the pigs to make all his decisions for him- two mottoes are “I will work harder” and “Napoleon is always right.”- most sympathetically drawn character in the novel, Boxer has all of the best qualities of the exploited working classes: dedication, loyalty, and a huge capacity for labor.

Squealer:- he spreads Napoleon’s propaganda among the other animals- he justifies the pigs’ monopolization of resources and spreads false statistics pointing to the farm’s success- Squealer abuses language to justify Napoleon’s actions and policies to the proletariat by whatever means seem necessary- Squealer’s lack of conscience and unwavering loyalty to his leader, make him the perfect propagandist for any tyranny.

Old Major:- his vision of a socialist utopia serves as the inspiration for the Rebellion- three days after the dream and teaching the animals the song “Beasts of England” he dies- leaving Snowball and Napoleon to struggle for control of his legacy- Orwell based Major on both the German political economist Karl Marx and the Russian revolutionary leader Vladimir Ilych Lenin, as a visionary who predicts a grand future.

Clover: – A good-hearted female cart-horse and Boxer’s close friend. She suspects from the pigs of violating one of the Seven Commandments, but finally, she blames herself for misremembering the commandments.

Benjamin: – The long-lived donkey who refuses to feel inspired by the Rebellion. Benjamin firmly believes that life will remain unpleasant no matter who is in charge. Of all of the animals on the farm, he alone comprehends the changes that take place, but he seems either unwilling or unable to oppose the pigs.

Mollie: – The mare who pulls Mr. Jones’s carriage. Mollie craves the attention of human beings and loves being groomed and pampered. She has a difficult time with her new life on Animal Farm, as she misses wearing ribbons in her mane and eating sugar cubes. Finally, she escaped.

Jessie and Bluebell :- Two dogs, each of whom gives birth early in the novel. Napoleon takes the puppies in order to “educate” them.

The Corruption of Socialist IdealsIn this novel, the overthrow of the human oppressor Mr. Jones by a democratic coalition of animals quickly gives way to the consolidation of power among the pigs. Much like the Soviet intelligentsia, the pigs establish themselves as the ruling class in the new society. Class Stratification  In this novel, Orwell illustrates how classes that are initially unified in the face of a common enemy, as the animals are against the humans, may become internally divided when that enemy is eliminated.

Language Control: In Animal Farm, the pigs gradually twist and distort a rhetoric of socialist revolution to justify their behavior and to keep the other animals in the dark. The animals heartily embrace Major’s visionary ideal of socialism, but after Major dies, the pigs gradually twist the meaning of his words. As a result, the other animals seem unable to oppose the pigs without also opposing the ideals of the Rebellion.

Symbol: Animal FarmAnimal Farm, known at the beginning of the novel as the Manor Farm, symbolizes Russia and the Soviet Union under Communist Party rule. ‘Beasts of England’Summarises Old Major’s ideals. Represents the hope that the animals will be freeLiterary DevicesForeshadowing“Without saying anything to the others, she (Clover) went to Mollie’s stall and turned over the straw with her hoof. Hidden under the straw were a little pile of lump sugar and several bunches of ribbon of different colours.”  ( Orwell, 46)Foreshadowed Mollie leaving the farm, and not fully taking part in the rebellion. 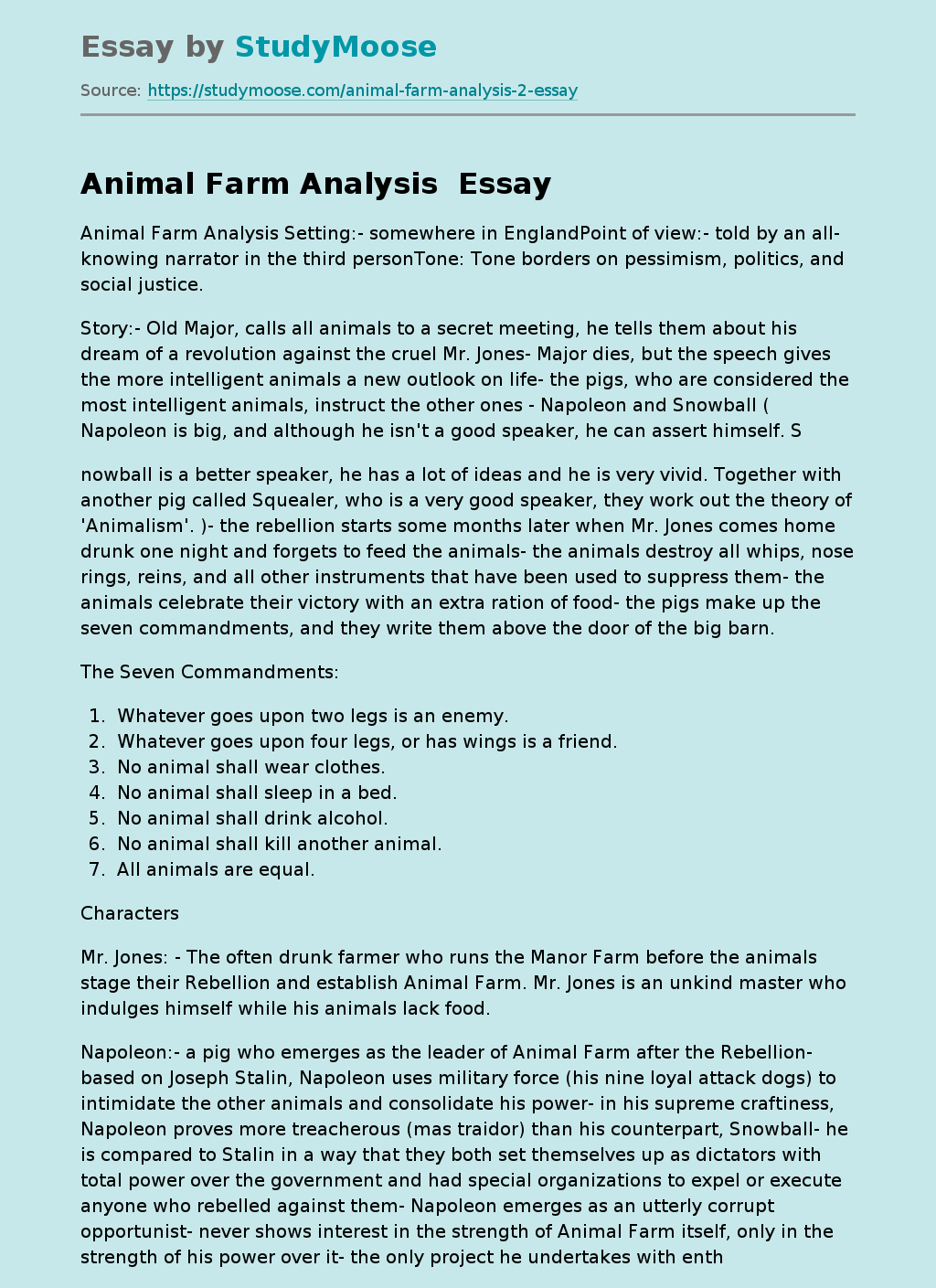