Now our eyes are lashed by animal-abusing events nearby: Liu Haiyang, a Qinghua University student, hurt bears by sulphuric acid; tigers in circus troupe died of tiredness; thousands upon thousands of pet dogs in Guangzhou have them vocal cords cuthere are still countless such examples too tragic to look upon.

The lesson we learn from that is not the transaction to individual event, but the need of some deep-going thinking: why does China have no related laws to ban and penalize similar commitment, when our society is increasingly developed; and why can our citizens turn blind in front of such atrocities when they are kept in a nation with profound Buddhism origin.

Don't use plagiarized sources. Get your custom essay on
“ Animal Cruelty in China ”
Get custom paper
NEW! smart matching with writer

Few people in China care about the feelings of animals or possess the concept of animal welfare. Some traditional factors play a positive role in this field. From childhood, anything about animals, most Chinese children get in touch with has undoubtedly put man above them.

Even some of the children songs have described the nature of animals as malicious, such as slippery fox and ruthless wolf and so on, which not only casts a dark shadow over their hearts, but also leaves a wide gap between animals and children.

These can all be taken in at a glance at the old saying: Man is the master of the universe. Disdain in spirit may lead to cruelty in action. As a result, man endows himself the natural rights to dominate the universe at the thought of human rights is gifted by the God, and take the life of animals as trifling matters.

The civilized man always divides creatures into mankind and animals. The reason is no doubt that man thinks high of himself. Then is the deep-rooted human priority really true? Why should we insist on the inferiority of animals? Darwin has particularly compared the intellect of man and lower orders animals. He hold the opinion that we now know that the sensory organs, intuition, all kinds of emotions and functions, such as, love, memory, attention, curiosity, imitating and reasoning abilities, etc.

Scientists have proved that animals possess sense perception as man does, which makes us have to ask ourselves a question: in the past 200 years, why did men keep extending the idea of ethics from state to nation, then to race, and finally to all individuals? Of course, morality has economic limitation. The reason because we found the former practice unfair. History shows that the category of ethical ideas is continuously expanding, and its extent keeps deepening. Man will finally break each kind of discovered unfairness, but we still exclude most perceptive species.

Man could not communicate with animals in language, nor could they by other means. Therefore, man could not understand their agony and thereby took it as granted that animals could not sense pain. But now, man can measure whether an animal is suffering pain by some quantified standards. Experiments also proved the ability of animals to sense pain. If man still disregards their feelings in such a case, then it can by no means be considered a noble thing. A Chinese proverb says that never give anything to the others unless you like the thing. It may be changed into never give anything man dislike to them.

Then how should we judge the suitable category of ethics at present level? I believe that the profit of each object involved in an action should all be considered. Therefore, we should extend the category of ethics to all species that are able to sense pain, joy and happiness. Why cannot man recognize animals in real life? The reason is that morality also has limitation of society. In reality there are usually conflicts between man and animal. Once man thinks an animal is harmful to him, he will show defense and hostility, considering not at all its welfare.

Humans treat other humans still like this, let alone towards animals incapable of communicating in human languages. Therefore, powerful binding force is needed to seek welfare for animals. From the legal point of view, the inheritance of excellent Chinese traditional morality should be absorbed by newly discussed Chinese Animal Welfare Laws. Although it is easy to learn from abroad, it still needs persevering efforts of several years to really make the idea of animal welfare go deep into the hearts of most Chinese citizens.

Since China has now been one of the members of World Trade Organization, the legal system and civilization level must catch up with the steps of economy linked to international developed countries. Thus, the development is wholesome, up-going and full-scale. It will be a great victory of global animal welfare cause to realize its popularization in China, a country that takes up one fifth of the world population. Up till now, most countries have enacted related laws and regulations.

Many experience shows that in a society, the more advanced the economy, and the deeper the democratic idea goes into people heart, the much easier the concept of animal welfare is popularized and accepted by its citizens. Whether a person owns a kind heart can also be judged by his treatment toward animals. It is said that some criminologists point out that the maltreatment toward animals in childhood is a sign of the risk of committing crimes after grown up. Law is the minimal morality. The love and attention to animals should be from the bottom of hearts, instead of the regulation at legal levels.

Maybe when human society reaches the stage of, in the word of Confucius, every life being equal, it is the time that animals finally be liberated. Universal love has no distinction between species. This is a world shared together by man and animals. China has started fairly late, but we may not escape or be absent in the trend of universal love. The future is bright but the way is zigzag. I would like to cite this Chinese proverb to describe the situation of Animal Welfare Law in China and I hope all the animals live happier life in the future, in China. 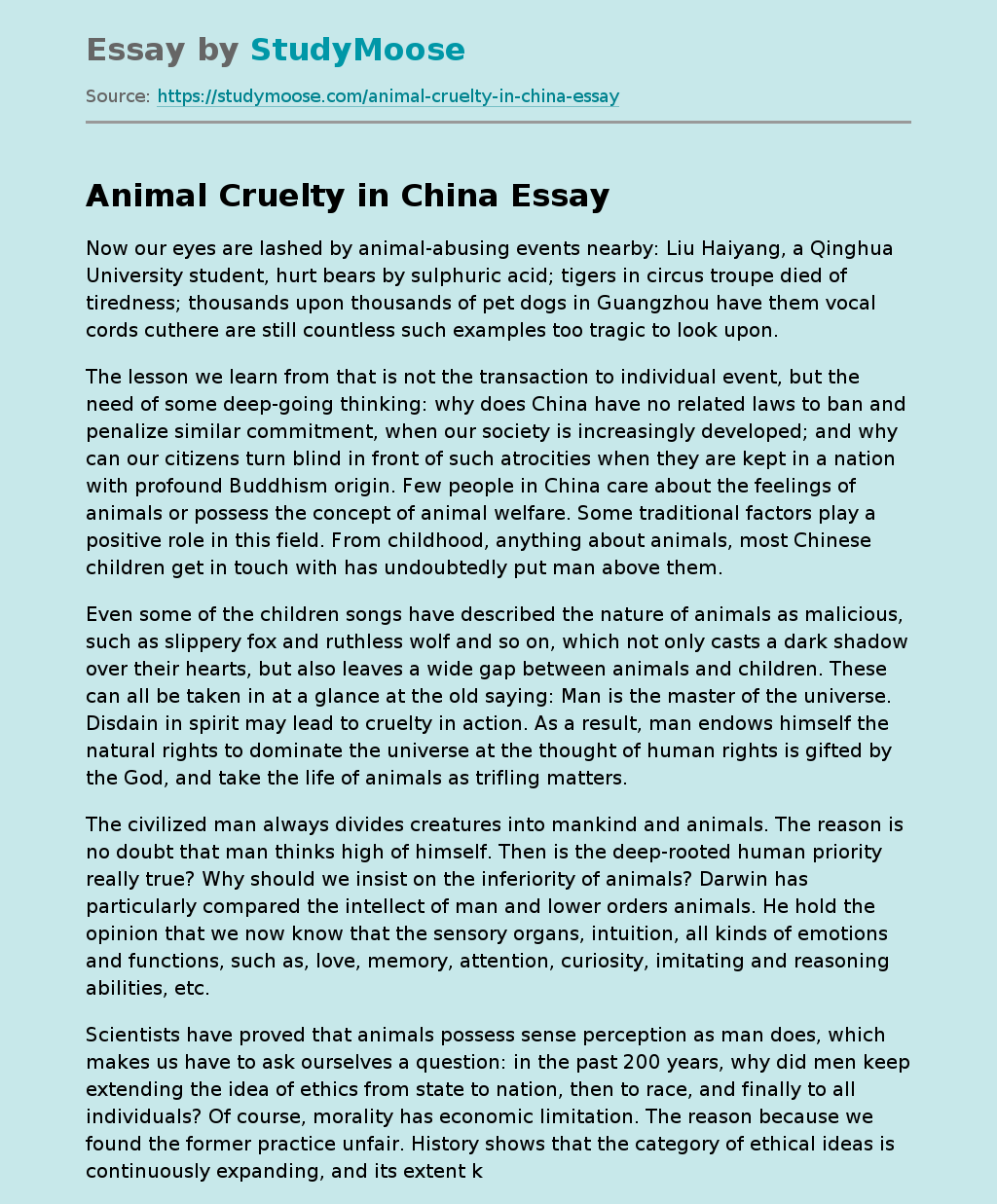