In Seamus Heaney’s translation of the epic Beowulf, the protagonist, Beowulf, exemplifies the values of an Anglo-Saxon warrior and king. Beowulf is a Geatish warrior who uses his super-human strength to defend the Danes, a neighboring kingdom, from a terrible monster named Grendel. Beowulf then goes on to kill Grendel’s mother and become the king of the Geats. During his reign, Beowulf runs a successful kingdom and sacrifices his life to save his kingdom from a dragon. Beowulf demonstrates the Anglo-Saxon values of physical strength, a thirst for revenge, and courage, through the manner in which he fights various battles and his motives for fighting them.

Beowulf’s extraordinary physical strength is displayed during his battle with Grendel, a powerful monster who has fought and killed many Danish warriors without difficulty. When Grendel tries to sneak up on Beowulf, Grendel discovers “himself in a handgrip harder than anything he had ever encountered in any man on the face of the earth” (Beowulf lines 749-752).

Physical strength is greatly valued by the Anglo-Saxon culture, and Beowulf is stronger than anything Grendel has ever faced before. Because of his impressive strength, both the Danes and Geats are willing to follow Beowulf into battle and can count on him to lead and protect them. It is evident from Grendel’s struggle that Beowulf surpasses the physical strength of the normal human, making him a model Anglo-Saxon warrior. Along with his immense physical strength, Beowulf is willing to seek revenge to achieve justice.

BEOWULF’S BATTLE WITH GRENDEL’S MOTHER IS DRIVEN BY REVENGE. GRENDEL’S MOTHER SNATCHES AND KILLS A DANE NAMED AESCHERE, WHICH DEEPLY AFFECTS KING HYGELAC, WHOM BEOWULF IS VERY CLOSE TO. BEOWULF TAKES IT UPON HIMSELF TO AVENGE THE DEATH OF AESCHERE FOR KING HYGELAC AND INSTIGATE A BATTLE WITH GRENDEL’S MOTHER IN THE NAME OF JUSTICE. BEOWULF’S BELIEF THAT “IT IS ALWAYS BETTER TO AVENGE DEAR ONES THAN TO INDULGE IN MOURNING” REPRESENTS THE BELIEFS OF MANY ANGLO-SAXON WARRIORS. (BEOWULF LINES 1384-1385). IN ANGLO-SAXON CULTURE, GRIEVING OVER ONE’S LOSSES IS DISCOURAGED. IF AN ANGLO-SAXON WARRIOR IS WRONGED, THEY ARE OBLIGATED TO SEEK VENGEANCE AND BE WILLING TO INSTIGATE BATTLES IN ORDER TO BE A SUCCESSFUL AND RESPECTED WARRIOR OR KING. BEOWULF LIVES UP TO THE SOCIAL NORMS OF ANGLO-SAXON SOCIETY AND MANAGES TO MAINTAIN HIS HEROIC REPUTATION BY ATTEMPTING TO KILL GRENDEL’S MOTHER AS AN ACT OF REVENGE. A BATTLE FOUGHT IN THE NAME OF REVENGE HAS THE POTENTIAL TO SHOWCASE A HERO’S TALENT AND DRIVE THEM TO FAME, BUT THAT THIRST FOR REVENGE IS AN EMPTY THREAT WITHOUT COURAGE TO BACK IT UP.

Beowulf reveals tremendous courage in each of his battles, but exceptional fearlessness is displayed in his fight against a dragon to defend the people of his kingdom. Beowulf is very old at the time of this battle, so he knows the chances of him being able to defeat the dragon and survive are slim. Despite the unlikelihood of his victory, Beowulf still chooses to fight, and tells his men,”this fight is not yours, nor is it up to any man except me, to measure his strength against the monster or to prove his worth. I shall win the gold by my courage” (Beowulf lines 2532-2536). As king, Beowulf abides to the norms of Anglo-saxon culture and feels that he must be the one to lead his men to battle no matter what the cost. All of Beowulf’s warriors, except Wiglaf, abandon him when he needs them most during the battle, out of fear for their lives. Beowulf and Wiglaf are the only ones with the courage to continue fighting the dragon even when the odds are working against them, proving that they alone have the values of a true Anglo-saxon warrior.

Throughout Beowulf’s life he earns his place as a devoted and successful Anglo-Saxon warrior because he demonstrates their values not once, but three times. In each of his battles, Beowulf”s actions portray the key Anglo-Saxon values of immense physical strength, the right to seek revenge, and courage. By observing the manner in which Beowulf fights his battles, one can conclude that in order to be a respected Anglo-Saxon leader and warrior one must possess all of these qualities. Leaders today exemplify traits the people of society value, which allow the leaders to gain the trust and admiration of others, just as Beowulf did. This is evident in the protagonists we choose for our literature and the people we choose to lead us. For example, selflessness is highly valued in today’s society, and a major literary hero, Superman, shows this characteristic by fighting evil to save others without concern for himself. Beowulf and leaders today are able to achieve respect and power because they embody the traits admired by the people of their time. 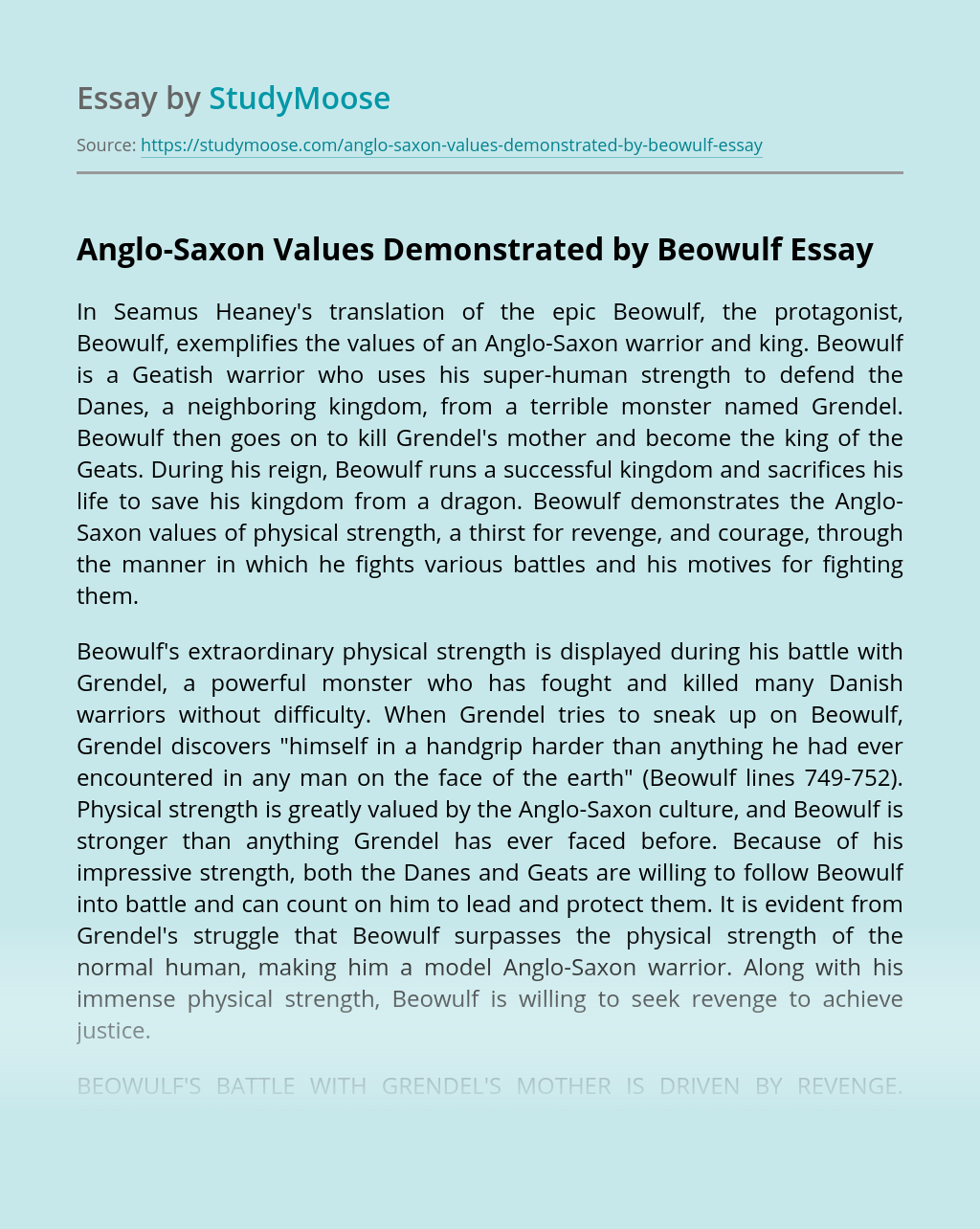