Anger and Violence in Partition Literature

About sixty four years have passed by but the dark imprint of that horribly tormenting experience is still etched vividly in the minds of those who were compelled to undergo this horrific ordeal named ‘Partition’. Like any other refugee they had to face the pangs of hunger, poverty, deprivation and utter humiliation from their own country men. A new nation was already passing through the pains of birth hence it had no time and mechanism to cope with the huge exodus of the sea of humanity that appeared on the arena.

Don't use plagiarized sources. Get your custom essay on
“ Anger and Violence in Partition Literature ”
Get custom paper
NEW! smart matching with writer

Partition literature is a kind of humble tribute to those fighting millions who braving all odds managed to piece together the scattered fragments of their own lives. Partition forcibly imposed a heart rending separation on Siami twins thereby making the resultant pain and agony inevitable. Hence, to measure the intensity and magnitude of devastation wrecked by partition of India and explain the pain and trauma in words is truly a mammoth task for the writers and historians.

The glaring irony that underlay the independence of the country sensitized the creative authors to respond to the tragic tale of misery and bloodshed beyond the apparent and the obvious by discerning into the gulf of not only partitioned nation but also partitioned hearts and minds. Writers like Khushwant Singh, Bhisham Sahni, R. K. Narayan, Manohar Malgoankar, Chaman Nahal, Raj Gill, H. S. Gill and Salman Rushdi have written and tried to translate the historical event of partition. They have all captured the immediacy of the horrors of this traumatic experience and tumultuous historical reality.

Bhisham Sahni, the sterling writer on partition and author of famous novel ‘Tamas’ emphasizes the harmony in which religious affairs of different communities could be conducted in atmosphere of tolerance. He considers partition a mistake, the result of a fatal ideology of religious politics. Being himself a witness to the riots of 1947 happened in Rawalpindi, he has taken true accounts of these horrendous and spine chilling events there and these harsh realities of the consequences of communal prejudices are of utmost relevance even today.

Bakshi Ji, one of the prominent characters in Tamas, warns his fellow being, Mehta Ji, of an impending disaster : “Kites and vultures shall hover over the town, Mehta Ji”. The intensity of distrust and faithlessness has vividly been depicted by the writer when Mehta Ji retorts back to Bakshi Ji : “No one can be trusted, neither Muslims nor Hindus. ” The countrymen were not safe and secure even in their own country which gave birth to intense anger and wrath in their minds against their own fellow beings.

The writer is successful in bringing this point home by making Maula dad say : “If it were left to Hindus, a riot would certainly break out. It is we Muslims who are putting up with all kinds of provocations. ” The situation was no better even amongst the members of the same community who tried to soften up those strong idiosyncrasies which were responsible for instilling a loathsome feeling in their minds against their own countrymen and establish peace and harmony among themselves.

One of the Muslim characters proves this point by saying : “It is not the Hindu who is the enemy of the Muslims, It is the tail-wagging Musalman who goes after the Hindus and lives on the crumbs thrown to him. ” It is noteworthy that within the tragic framework of the partition novels, violence and anger remain a predominant concern of the writers. It indeed provides the basis of most of the partition fiction and rightly so. It is well known that the catastrophe of partition was preceded as well as followed by unprecedented violence on the subcontinent.

There is no dearth of historical evidence to substantiate the colossal anarchy, insensitivity and inhumanity at that historical juncture. The partition of Indian subcontinent on the communal basis into the sovereign states of India and Pakistan caused one of the bloodiest upheavals in the history of human race. Looting, arson, raping, abducting and changing Faith became order of the day. Sudden cries of victims pierced the darkness of the night every now and then.

Such shocking and horrible instances shook and melted the conscience of the civilized people world over and made them shudder with anguish and dismay at man’s wolfish cruelty to man in the name of religion. The irony is that, these heart- rending and unashamed acts of violence were not only crass and obtuse, they were also irrational and purposeless. It achieved nothing except the heinous massacre of not fewer than too million people. Khushwant Singh’s ‘Train to Pakistan’ is another example of brutal violence and anger.

The scene of brutally killed and mutilated bodies floating in Sutlej and the accounts of Hukam Chand’s acquaintance who made there tryst with barbaric destiny on 15th Aug. towards the end of the novel confront the reader with communal bestiality in its crudest form. The treatment of violence by the creative writers extends beyond mere documentation of surface reality. Their brilliant works are not merely violent narratives but also an effective address to the larger issues of human significance through the tales of violence.

They seek to explore the various emotional responses that the tragedy evokes in human beings in crises. The authors themselves feel baffled to confront such atrocious inhumanity and seem to ask, “Why all this senseless human waste? ” The natural response of their characters, therefore, embodies itself in the form of shocking horror, a sense of bewilderment and disgust, pain and agony. Such a response seems crystallized in the character of Hasina in Sadat Hasan Monto’s ‘A Tale of 1947’ : “The great tragedy is not that two hundred thousand people have been killed, but that this enormous loss of life has been futile. The main theme of partition fiction is not to present graphic details of partition violence but the involved consideration of the nature of man and enigma of human destiny through a juxtaposition of violence with a concept of moral order. Through the crazy acts of violence is revealed an incomprehensible human distortion and a civilizational aberration causing a total collapse of human significance. No doubt, the original must have been quiet riveting and exciting.

However, the translation leaves much to be desired. Transcreation basically means recreating a text for a specific audience. The process involves both translating and recreating the original narrative while keeping all its elements and traits intact, viz, its message and style, the images and emotions it evokes and the period as well as cultural milieu in which it is set. , For this, the transcreator must be an expert both in the source language as well as the target language and familiar with the respective cultures.

So it is noted that partition literature has largely succeeded in sounding the depth where from partition arose like a monster from the deep and partition literature and other many novels very aptly reflect the anger and pain initiated and evoked by the event of partition. The mood of these novels and other partition novels is one of resentment and human mind feels a lot of strain and is compelled to ask, “O God ! Why this had to happen. ” This literature recalls and revises the horrendous memories of spine chilling events that still baffles the human psyche.

Partition literature wedded to Indian historicity shows the dark side of man’s nature. A glooming fog hovers around it but some silver lining also flickers here and there. The better part of human psyche also raises its head and soothes the flames of anger, violence and agony. Hats off to those people who, having borne the trauma of partition emerged stronger and showed their nerves of steel and made a new beginning in their lives. We also salute the writers who made the partition the worth while subject of their composition.

Anger and Violence in Partition Literature. (2018, Nov 03). Retrieved from https://studymoose.com/anger-and-violence-in-partition-literature-essay 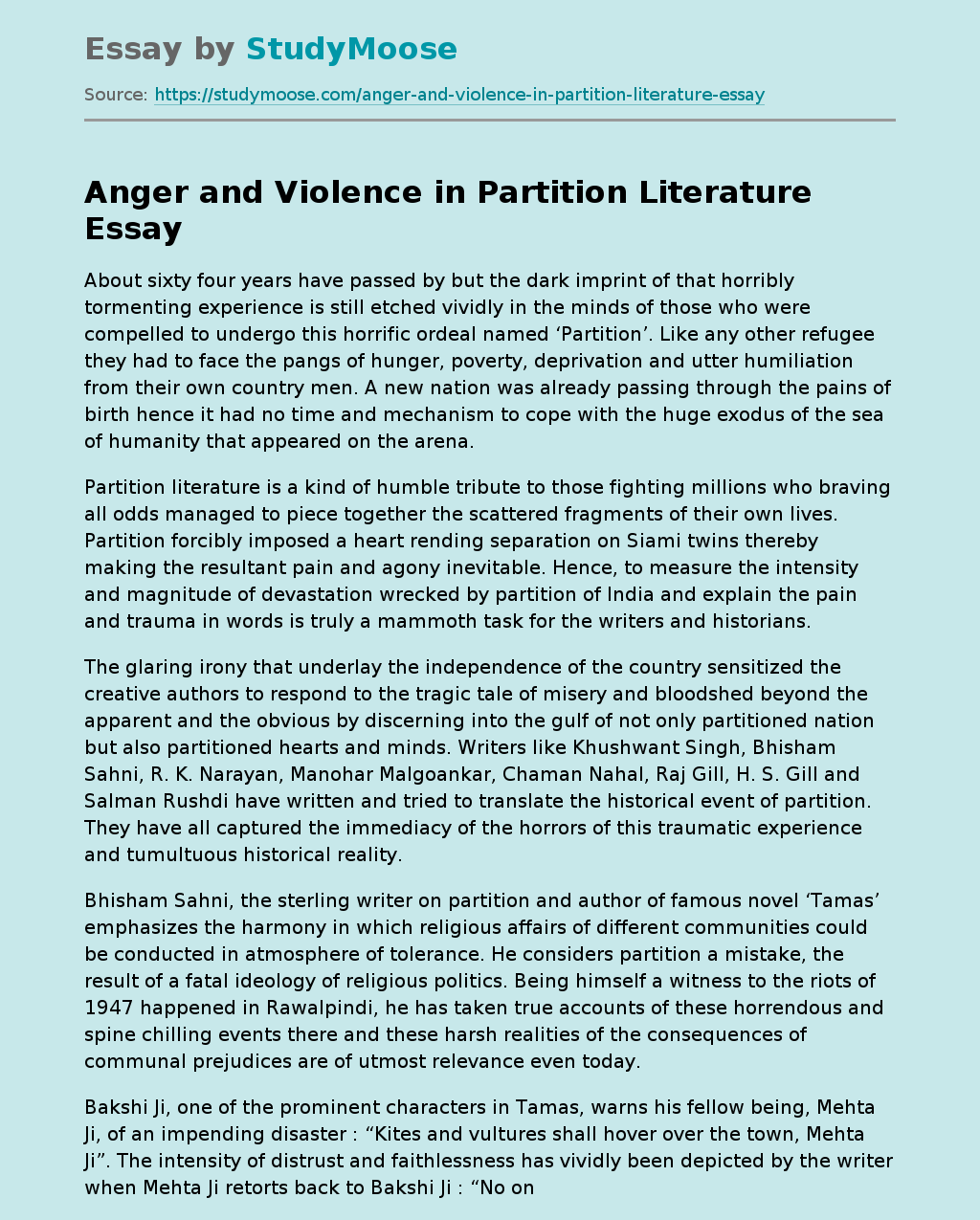