Understanding the artwork of Andy Warhol is something akin to figuring out a Zen riddle. That is, and people will look for something extraordinary when all they need to do is understand the simplicity of what they are viewing. Andy Warhol’s concept of pop art involved taking the very common images in presenting them in such a way that the commonality was elevated. But can you really elevate something that is common? Apparently so; Warhol did this quite effectively in his earlier works.

However, in later years, Warhol’s work started to look a little tired.

Perhaps the novelty of pop art was wearing off and Warhol’s creativity had stretched thin. There were, however, some interesting pieces of art produced by Warhol in the last decade of his life. This return to inspired creativity is evident in 1981’s painting Dracula , one of his most underrated works. What was the inspiration for the Dracula painting? Was it Bram Stoker’s novel? Was it the classic Bela Lougosi interpretation? Was it the popular play passion of Dracula that proved very successful at the time?

To a degree, they may have all had their influences in prompting Warhol to use Dracula as subject matter.

But, do not let be fooled: Warhol was probably very influenced by a film he produced entitled blood for Dracula . blood for Dracula was an odd dark, tragic satire that saw the aging Count travel to the Catholic country of Italy to find virgin blood. Unless he can find such a victim, he will (finally) die of old age.

Of course, his search for a virgin proves fruitless and his days are numbered.

While the obvious satire of morality is evident, not so evident is the notion that Dracula represents the old world of the aristocracy. Dracula remains the last of the aristocrats having seen the world he previously knew disappearing to the expansion of Marxism. It is this same subtle theme that is also present in the Dracula painting and that is what makes it so striking. With fangs bared, cape cowl turned upwards, and eyes wide open it would seem that this is a frightening picture of Dracula.

Upon close examination, it really isn’t. Yes, in a previous generation the image of Dracula recreated by Warhol would be considered terrifying. However, by 1981, said to image really is – for lack of a better word – corny. Economic woes, foreign policy strife, and social upheaval had driven horror movies to become more violent and more graphic. The classic monsters simply became a casualty of the era. They were no longer frightening. And, as the painting infers, Dracula knows this.

If you look closely into the eyes of Dracula (in the painting) you will notice decidedly out of place emotions. The eyes simply do not appear menacing or frightening. Actually, they appear more confused than anything else. They are wide open and “glassey” and seemingly have a dual expression of shock and boredom. Perhaps Dracula is shocked that he is no longer frightening. Or, perhaps, he is simply bored of his role as King of the Vampires. Either way, this would indicate a character that understands time has passed him by.

This is clearly not the Count Dracula of bygone eras. This is a crucial point because it is this “past him prime” appearance that Warhol apparently wanted to capture. This is interesting since he opts not to elevate a character from pop culture; but, instead, decides to deconstruct one. In a way, there is a melancholy sadness found in Warhol’s Dracula painting. This would seem to make sense, however, since the true role of pop art is to depict things as we really see them. In 1981, we were no longer looking at Dracula as a character as much as a tired caricature. 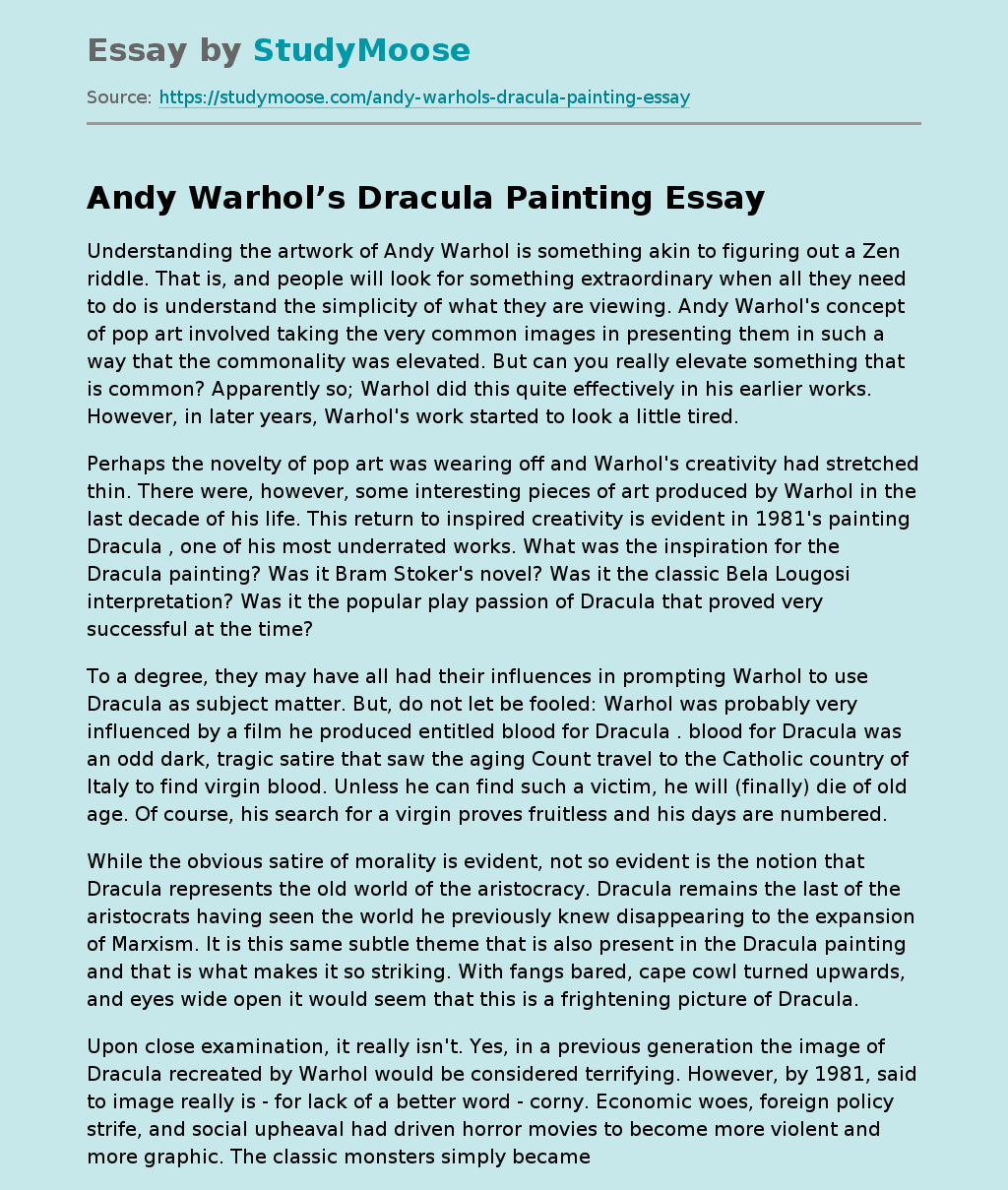