Andy Warhol created his silk screen painting Statue of Liberty in 1962 using silkscreen ink and spray paint on linen. Just as the title suggests, the painting’s subject is the Statue of Liberty, repeated in a pattern twelve times (not including the right side of the painting where the image repeats four additional times, but is cut off). The painting is currently being exhibited at the Arkansas Arts Center, but it belongs to the Andy Warhol Museum in Pittsburgh, Pennsylvania. It is relatively large at 80 by 61 inches (that’s bigger than me!).

Don't use plagiarized sources. Get your custom essay on
“ Andy Warhol – Statue of Liberty ”
Get custom paper
NEW! smart matching with writer

One must look up at the painting if not standing far enough away to view it in its entirety.

The image that repeats twelve times in the painting is that of the Statue of Liberty standing face on, and we view her from her legs up. We are able to see her torch, or at least most of it, and the horizon in the background. The painting is mostly in the cool hue of blue, but not in its normal value; it may have some green mixed in with it.

In contrast to the blue, there is the warm hue of red visible in the top right quarter of the painting. The painting is not centered on the linen, but rather somewhat aligned to the right, so there is a significant amount of unused or unpainted space on the left side. The repetition of the statue’s image gives the work a sense of unity, while the differences between the twelve images in the pattern (and there are many) offer variety.

It appears as though the image of the statue itself is not painted for the most part, but it must be to some degree or it would not be distinguishable, so it must be a significantly lighter value than the blue that colors in the ocean. The sky in the background is the color of linen. The blue and/or red paint (depending on which rectangle it is) fills in the ocean in the bottom two thirds of each rectangular image. In about three fourths of the rectangles there is a cloud of blue in a darker value than that used on the statue that shrouds the statue’s face and/or torch, preventing us from seeing the entire image clearly. There are two rectangles at the top right corner of the work in which red paint is used, if you do not count the rectangles to the far right that are cut off. Because the painting is aligned to the right, and because the red paint is only used in the rectangles in the top right corner, there appears to be more weight on the right and less on the left, more weight on the top and less on the bottom. It looks like someone is pulling the painting up and away by its top right corner, like a tissue being pulled out of a tissue box.

The torch the statue holds, though it is certainly an implied line, surprisingly does not direct my eyes elsewhere. A grid of six implied lines is created by the repetition of the image. They are in between the four columns and four rows, unpainted and the color of linen. A line is created where the bluish ocean and the linen-colored sky meet. There are subtle, unstable lines that imply motion in the water behind the statue, more subtly in some rectangles than in others. Besides the shapes I have already described in the painting, the screen printing technique has left some areas of unpainted linen, particularly in the top row, where you find what is almost a perfect right triangle on the right side of the statue. Also, in the third row you find an organic but otherwise indistinguishable shape which slightly resembles a jagged mountain range. There is light in each rectangle illuminating the statue and the ocean and modeling the statue’s three dimensions.

The color value of the repeated image changes from rectangle to rectangle, very clouded in some and extremely clear in others. Because the face of the Statue of Liberty varies between clearly visible, somewhat visible and entirely covered from rectangle to rectangle, the presentation changes with each second your eyes moves across the painting. The statue is fixed, providing unity, because regardless of what we are able or not able to see in any given rectangle, we know it is the Statue of Liberty. It’s the movement (or the complete disappearance) of the cloud that gives the pattern its variety. If symmetrical balance is used to express order, then this work is slightly unbalanced in that regard because of the tissue box effect I mentioned earlier. The empty space on the left side of the painting is somewhat balanced by the red paint in the upper right corner, but not to the degree that I would consider asymmetrically balanced.

You might think the cloud-like shape that covers the face of the statue is an effort to either emphasize or subordinate the statue’s face or the torch she holds, but I think it’s not her face we are suppose to care about so much as the fact that she is covered or uncovered in various ways in an inconsistent manner. The Statue of Liberty is gigantic (I presume, because I have not seen it myself), but here its image is presented in a shrunken size and then multiplied by twelve. The rectangles are all in correct proportion to one another, and the movement of the cloud of blue creates an overtly even rhythm that envelops the whole piece.

The Statue of Liberty represents more than I can fully explain in this paper. The label next to Statue of Liberty mentioned that Warhol was an immigrant and used the term ‘generic’ to describe the terms in which Warhol or others may have thought about immigration to America (I don’t remember the exact wording. I think the repetition of the image in twelve different rectangles represents the wide variety of experiences that people have when immigrating to this country, and the movement of the blue cloud represents the differences among experiences. The empty space on the left side of the painting implies that the ideal Americathe America that immigrants dream of going tois not as all-encompassing as some people might think.

In other words, the greatness of the dream falls a bit short in reality. Warhol has taken the Statue of Liberty, with its hard, smooth surface, shrunken it significantly, multiplied it by twelve, and made it hard and gritty in every single repetition. His screen printing technique leaves a kind of blob covering the statue in different areas, and this gives the painting a quality of elusiveness. This elusiveness lends itself to the idea that the general perception of immigration to America is a generic one, and yet it could turn out to be so many different things, depending on how much money you have and who you know. 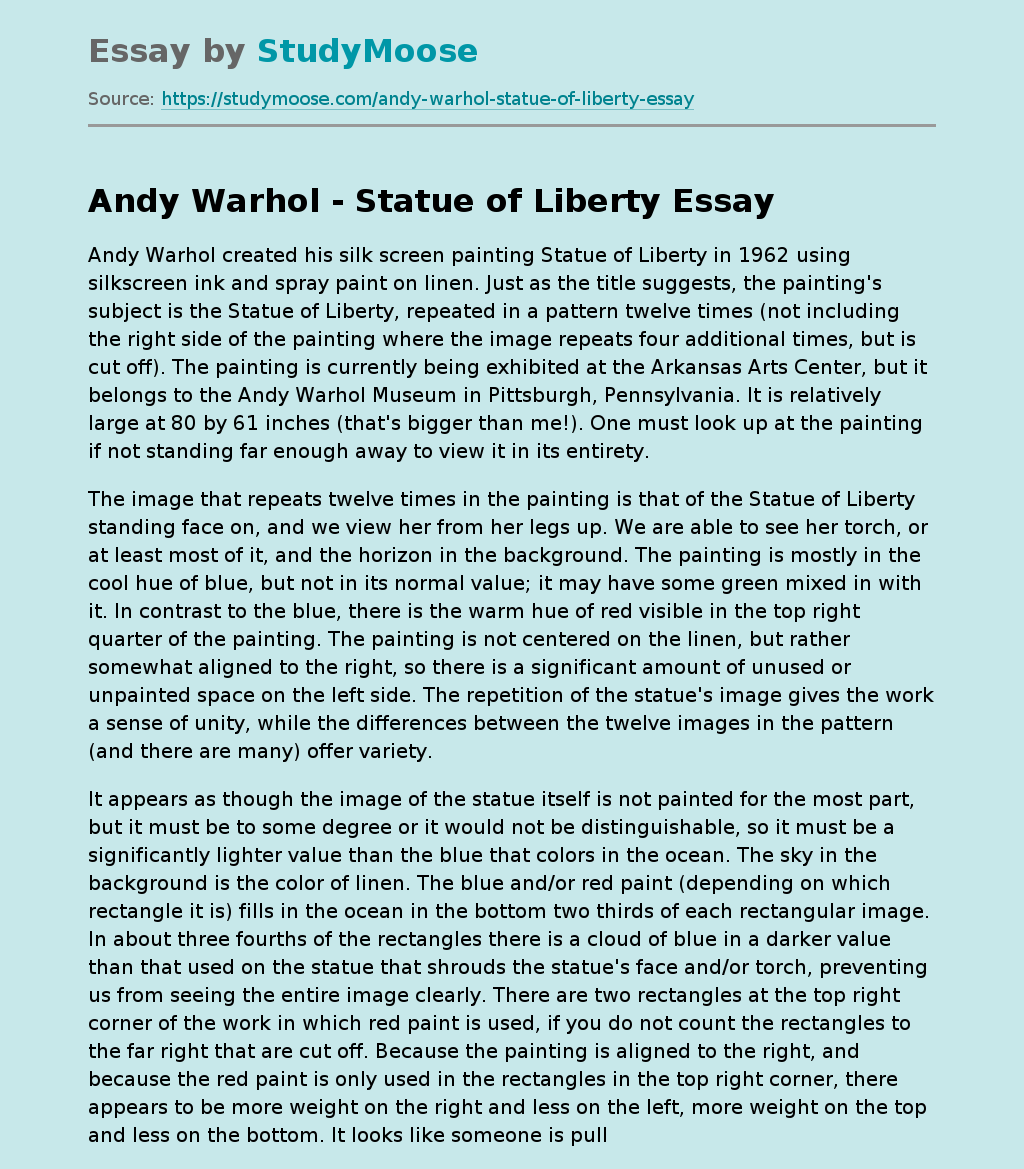