The last couple of months under Rumson has suggests that being president of this country was to a certain extent about character, and although I have not been willing to engage in his attacks on me, I’ve been here three years and three days, and I can tell you without hesitation; being president of this country, is entirely about character. For the record, yes, I am a card carrying member of the ACLU, but the more important question is, why aren’t you Bob? Now this is an organization whose sole purpose is to defend the Bill of Rights, so it naturally begs to question, why would a senator, his party’s most powerful spokesman and a candidate for president, choose to reject upholding the Constitution?

‘Now if you can answer that question folks, then you’re smarter than I am, because I didn’t understand it until, a few hours ago.

Don't use plagiarized sources. Get your custom essay on
“ Andrew Shepard’s Speech From The American President ”
Get custom paper
NEW! smart matching with writer

You’ve got to want it bad, cause It’s gonna put up a fight. It’s gonna say, “You want free speech? Let’s see you acknowledge a man whose words make your blood boil, whose standing center stage and advocating at the top of his lungs that which you would spend a lifetime apposing at the top of yours. You want to claim this land as the land of the free then the symbol of your country cannot just be a flag! ”

The symbol also has to be one of it’s citizens’ exercising his right to burn that flag in protests.

Now show me that, defend that, celebrate that in your classrooms. Then you can stand up and sing about the land of the free. I’ve known Bob Rumsin for years, and I’ve been operating under the assumption of the reason Bob devotes so much and time and energy to shouting at the rain, is that he simply didn’t get it. Well I was wrong Bob’s problem isn’t that he doesn’t get it, Bob’s problem is that he can’t sell it. We have serious problems to solve, and we need serious people to solve them. And whatever your particular problem is, I promise you, Bob Rumsin, is not the least bit interested in solving it. He is interested in two things, and two things only; making you afraid of it, and telling you who’s to blame for it.

That ladies and gentlemen, is how you win elections. You gather a group of middle aged, middle classed, middle income voters, who remember with longing and easier time, and you talk to them about family, American values, and character, and you wave an old photo of the President’s girlfriend, and you scream about patriotism, you tell she’s to blame for their lot in life, and you go on television, and you call her a whore. Sidney Ellen Wade, has done nothing to you Bob, she has done nothing but, put herself through school, represent the interests of public school teachers, and lobby for the safety of our natural resources. You want a character debate Bob, you better stick with me, because Sidney Ellen Wade is way out of your league. I’ve loved two women in my life.

I lost one to cancer and I lost the other because I was so busy keeping my job; I forgot to do my job. Well that ends right now. Tomorrow morning, the White House is sending a bill to Congress for it’s consideration. It’s White House Resolution 455, an energy bill requiring a 20% reduction of the emission of fossil fuels over the next 10 years. It is by far the most aggressive stride ever taken in the fight to reverse the effects of global warming. The other piece of legislation is the crime bill, as of today, it no longer exists; I’m throwing it out. I’m throwing it out and writing a law that makes sense. You cannot address crime prevention without getting rid of assault weapons and handguns.

I consider them a threat to National Security, and I will go door to door if I have to, but I’m going to convince Americans that I’m right and I’m gonna get the guns. We’ve got serious problems, and we need serious people. And if you want to talk about character Bob, you better come at me with more than a burning flag and a membership card. If you want to talk about character and American values fine, just tell me where and when and I’ll show up. This is a time for serious people Bob, and your fifteen minutes are up. My name is Andrew Shepard, and I am the President. 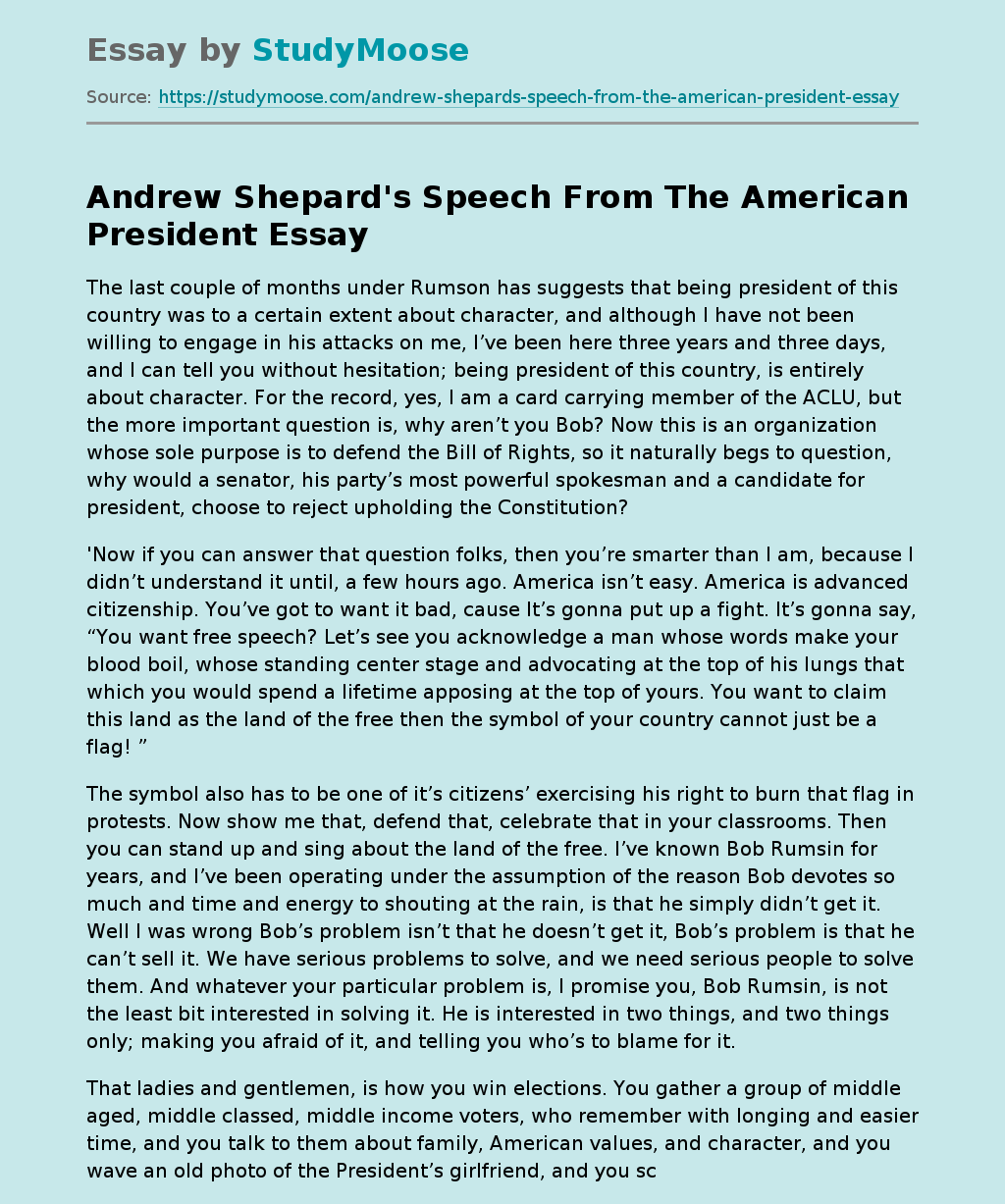