How did Andrew Carnegie’s views of the obligations of wealthy people compare with those of Henry George?

In the gilded ages dating back to the nineteenth century both Andrew Carnegie and Henry George were known as very influential men of their time both striving towards the common goal of deflating poverty in hopes to diminish it as a whole. Though both Andrew and Henry shared a similar feat they had very different approaches and ideas of methodizing the overall goal.

Don't use plagiarized sources. Get your custom essay on
“ Andrew Carnegie vs. Henry George ”
Get custom paper
NEW! smart matching with writer

Carnegie was a shrewes businessman who viewed it to be acceptable for very rich and very poor people to co-exist as long as the rich provided that their surpluses aspired the community with parks or libraries for example to better themselves known as the “lasting good,” and the rich would therefor better society rather than die rich men.

On the other hand, George felt that is wasn’t the fact that Americans weren’t given enough that was causing poverty but rather the rate of poverty by the misuse of land for example that was the cause.

Capital, a result of labor, and used then by labor to assist in further production has led to the misuse of resources as well. So basically George stated that if those who owned land used it’s recourses to provide places for poverty stricken people povery in turn would diminish itself.

Carnegie was a Scottish immigrant who built his empire from the ground up, as he was not always rich. Through a lot of smart calculated work, Carnegie managed to have a highly profitable company that monopolized the steel production industry which made him one of the richest Americans of his era.

He was a firm believer that the wealthy best knew how to use their riches for the public welfare and he wrote the Gospel of Wealth explaining his thoughts.

His basic idea was to not die a rich man for he wanted to spend his extra money to better our society and provide the poor with opportunities for advancement. The best means of benefitting the community is to place within its reach the ladders upon which the aspiring can rise – free libraries, parks, and means of recreation, by which men are helped in body and mind: works of art, certain to give leisure and improve the public taste; and public institutions of various kinds, which will improve the general condition of the people: in this manner returning their surplus wealth to the mass of their fellows in the forms best calculated to do them lasting good. (Carnegie/Wealth 1889/55) Carnegie felt it was perfectly okay that there existed very rich people and very poor people. It was the survival of the fittest, so to speak.

He felt as long as he did his part in providing what he thought were necessary tools that would help a poor person compete then everything was okay. As long as they were giving resources such as a free library then they really did not have any excuse to be poor. If they wanted to be successful bad enough then they would be able to do so by utilizing such resources that Carnegie offered. All though Carnegie was a giving man, he did not believe in giving the poor money. He felt that would make them lazy and dependent.

Henry George, like Carnegie wanted the poor to succeed but unlike Carnegie, he thought it was not okay for people to be rich. He wanted everyone to be equally wealthy and he felt poverty was a crime with the victim being the poor and the criminal being the rich. George did not think it was okay that business owners were profiting so much off of their employees who were doing all the work manufacturing goods. He felt if someone manufactured something then he/she should benefit as well, and not solely the boss. Carnegie felt the opposite; he wanted to maximize his profit by paying the laborer the least amount possible. George had a solution to end poverty. He wanted to share profits equally between the employer and the employed and he also wanted to reform government to get taxes down to a minimum.

Needless to say as one can look around today in our society and see that George’s philosophy was not widely accepted and is pretty much nonexistent as far as I can tell. Employers were not too fond of the idea of sharing equal profits with their employees for the effort to eliminate poverty. However, Carnegie’s philosophy has proven to be the more accepted, even today many wealthy continue to fund projects to build schools, libraries and parks. Just the other day it was noted on the news about UC Davis’s newest addition to their campus. A multi-million dollar brewery research building was built and is now open. The new addition was all privately funded by someone extremely wealthy. Is aggregation of wealth good for progress？

Our earth has two poles, the South Pole and the North Pole. Our society also has two poles, the “poor pole” and the “rich pole”. Can you image that when the rich eat delicious steak in the most expensive and luxury restaurant, the poor cannot even afford a bowl of porridge! At that time, what is the dish of rich people? Steak? Or the blood and tears of the poor! When the united states industrialize after the civil war, a great deal of inequality of wealth was created. Debate raged on whether this inequality was good for progress. I agree with Henry George’s opinion which claims that aggregation of wealth is not good for progress. This essay will contract the view of Henry George with Andrew Carnegie on whether concentration of wealth is good for progress or not and it will also analyze the reason for me to support Henry George. Second, Henry George believes there is a false propaganda in America about how anyone can become rich.

He does not agree that “This is a free country every man has a vote and every man has a chance to be rich”. (Page 15) He thinks it is a brain wash. No one seems to blame the institution, people think “No fault in our institutions.” They never believe the government is corrupted by lobbyists. “Poor are ignorant and shiftless” which means the poor are poor because they are stupid and all the things they “contributes to the augmentation of the common stock of wealth is little more than the mere force of his muscles.”(Page 15) “It would not merely be gross injustice to refuse a Raphael or a Rubens more than a house-painter, but it would prevent the development of great painters. To destroy the inequalities in condition would be to destroy the incentive to progress.” This is one of the key pieces of American identity, but Henry George does not think you need large inequalities to hare civilization, or at least, it should not as great as it in America. Henry George says “I doubt that the mental differences of men are greater than the physical differences.” He thinks we should raise the in pay for workers and cut the salary to managers to narrow the gap between the rich and the poor. 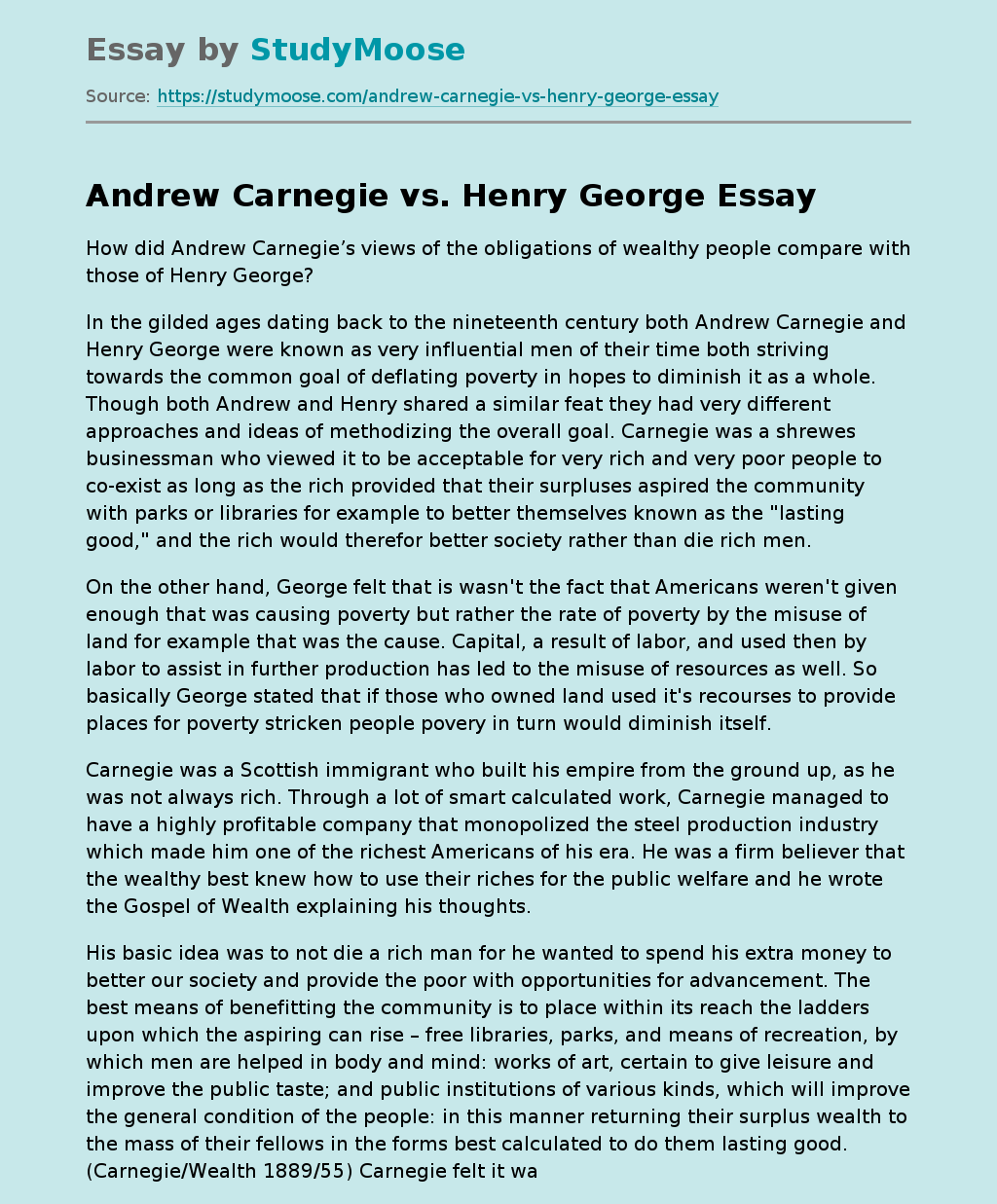