And do we blame Superstition for what we come to pass?

And do we blame Superstition for what we come to pass? Or could it be what we, the English, have come to know as class? The death of Edward and Mickey was very sudden and unpredictable but was it to do with superstition or class division? Mrs Lyons convinced Mrs Johnstone that if the twins were to ever find out they were twins, they would immediately die. The strange thing is, when they did find out they were brothers, they were both dead in 90 seconds.

Don't use plagiarized sources. Get your custom essay on
“ And do we blame Superstition for what we come to pass? ”
Get custom paper
NEW! smart matching with writer

Although Mrs Lyons only said that tall story to Mrs. Johnstone as threat and a precaution, it did actually happen. So, was their gruesome deaths due to superstition or class?

When Mickey shot Edward, was it on purpose or did it actually go off on it’s own accord? Did Mickey know the gun was loaded from the previous robbery for which he got sent to prison? Maybe Mickey purposefully shot Edward because he knows that if Mrs.

Lyons chose him instead of Edward, he would have the easy life and Edward would be at the bottom of the barrel like Mickey. But on the other hand, would Mickey shoot his brother and long-time friend? Maybe Mickey was under the influence of the pills when he ran to nis mother’s home and took the gun from under the floorboards and blew Edward to pieces. All this we have to take into consideration.

Mrs Johnstone said to Mrs Lyons that she only had to shake hands with a man and she was pregnant whereas Mrs Lyons couldn’t have a baby no matter how hard she tried.

And at that moment, the twins were born. After that, the Narrator talks about salt being spilled, mirrors getting cracked and single magpies. Next, Mrs. Johnstone says twice that she is not superstitious but it is obvious that she is. Poor people tend to be more superstitious because they have more things go wrong for them so they have to blame it on something. If Mrs Johnstone accidentally walked under a ladder and then came home to a house full of children with the flu, she would blame it on the ladder. These kind of people also believe in fate. Fate is when something is destined to happen and you can’t do anything about it.

This places Mrs Lyons in a prime position and Mrs Johnstone into a “catch 22” situation. Mrs Lyons convinces Mrs. Johnstone that she can’t afford two new children so she offers to buy one and tell Mr Lyons it was hers all along. If Mrs Johnstone says no, she would get fired, but if she says yes, she will regret it and although Mrs Lyons says she’ll see the baby all the time, she knows she won’t. Mrs Johnstone decided to give Mrs Lyons a baby so she doesn’t get fired but after a while she gets fired anyway because she concentrates on the baby, not on her work. So in the end she loses her baby and her job. Mrs Lyons tell the very superstitious Mrs Johnstone that if the twins were to find out they were twins, the shall both immediately die.

This is just a trick but Mrs Johnstone takes it seriously and makes sure that the twins never meet. After that, the narrator talks about cracked mirrors and walking on pavement cracks once again to tie in with the theme of superstition. The next time we see the twins, Mickey and Edward, is when they are aged seven. Some people think seven is a lucky number so superstition is covertly making an appearance again. Mickey starts playing near the park and the expensive houses where Edward lives so Mrs Johnstone tells Mickey off because if they meet and find out they are brothers, they will both die.

When Edward and Mickey do meet, Edward is bright and friendly but Mickey is a bit suspicious. They find out that they have the same birthday and declare themselves ‘Blood Brothers’. Mickey could tell straight away that Edward is from the posh houses. When Mickey asks for a sweet, Edward gives him one straight away, which Mickey thinks is soft: “Round here if y’ ask for a sweet, y’ have to ask about twenty million times and you still don’t get one” Mickey is more streetwise than Edward because Mickey is allowed to mix with the other children in the area but Edward is shielded and protected by Mrs Lyons.

Mickey calls his mother “me mam” whereas Edward calls his mother “my mummy”. Later on, Mrs Johnstone tells Edward to go back home but he will not, so she says: “Beat it, go home before the bogey man gets y'” When Edward gets home, he asks his parents how ‘bogey man’ is spelt but Mrs Lyons says it is nothing to worry about: “It’s a – a superstition. The sort of thing a silly mother might say to her children” This shows that Mrs Lyons is not superstitious and she does not want Edward to become superstitious. Without knowing it, Mrs Lyons is saying that Edward’s real mother is a silly mother.

When the children are playing cops and robbers and Indians, the rules are you have to cross your fingers and count to ten, otherwise you can’t get up. This was new to Edward because he couldn’t mix with the ‘riff-raff’ and play games with other children. When Mickey got shot when they were playing, he didn’t cross his fingers but he got up anyway. Linda got upset with this and brought it up with Mickey. He replied by saying the ‘F’ word. He didn’t cross his fingers when he swore so he will go to hell. All of his friends know this apart from Edward because they are all superstitious because they all have a similar background to Mickey.

Edward didn’t understand this because he has been brought up thinking that superstition was nonsense. Although playing with guns seemed like a game, it turned out to be deadly later on in their lives. Later on, Edward, Mickey and Linda get spotted throwing stones at windows by a policeman. When the policeman takes Mickey home, he tells Mrs Johnstone how bad Sammy and Mickey have been: “Well, there’ll be no more bloody warnings from now on. Either you keep them in order Missus, or it’ll be the courts for you, or worse, won’t it? “

And do we blame Superstition for what we come to pass?. (2017, Sep 24). Retrieved from https://studymoose.com/and-do-we-blame-superstition-for-what-we-come-to-pass-essay 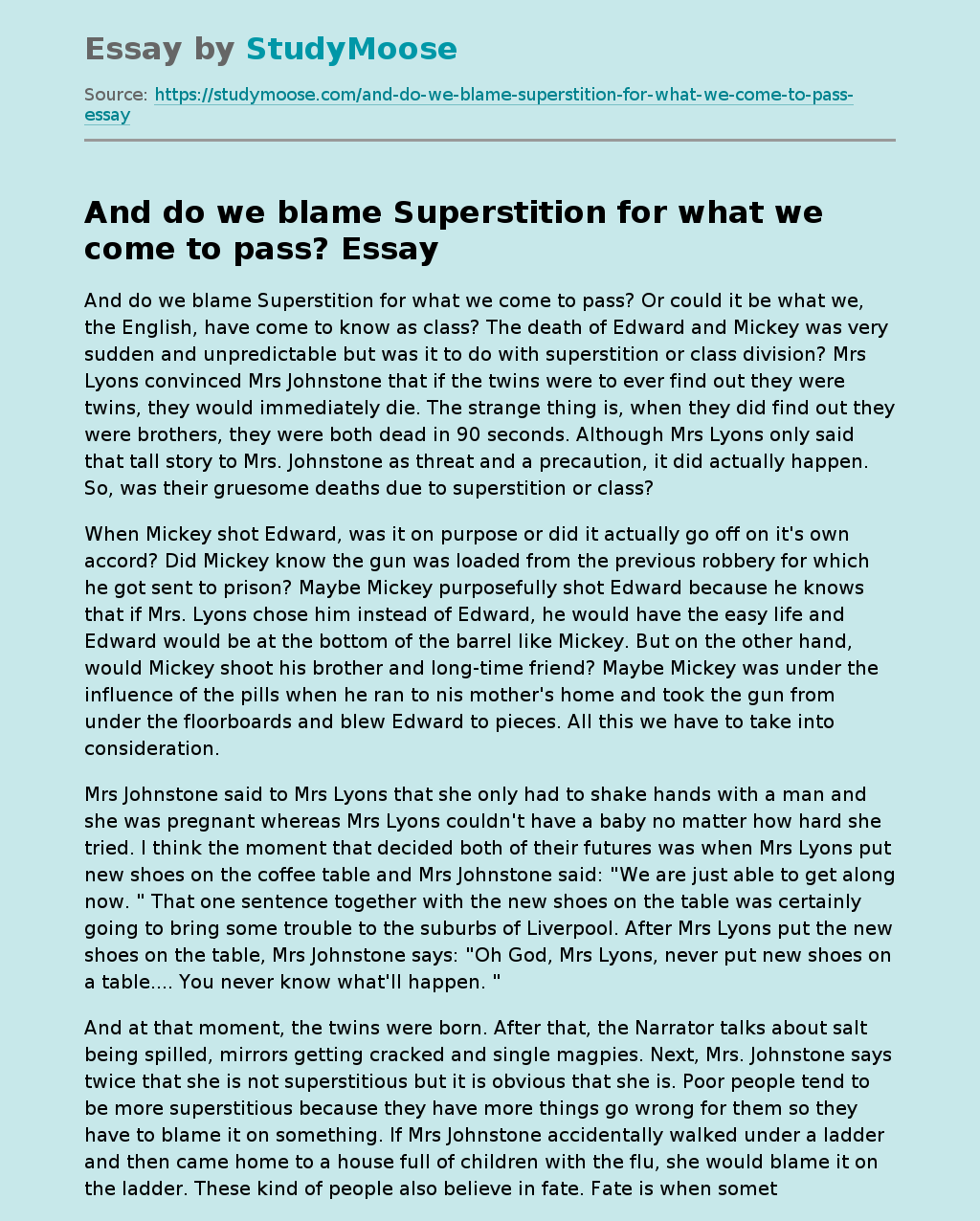