Bill Wilke Egyptians are highly known for their glorious pyramids, powerful pharaohs, and endless amounts of gold and Jewels. When we think of Egyptians we also think of tombs, curses, and cats being a source of protection. However, it is not known to many that they have not only defined the art, but also the meaning behind tattooing. Tattoos are the one thing still captured on the bodies of mummies, in which were discovered from over a millennium ago.

Females in particular, had specific tattoos which were used as a therapeutic role during pregnancy and birth.

Don't use plagiarized sources. Get your custom essay on
“ Ancient Egyptians ”
Get custom paper
NEW! smart matching with writer

Each tattoo had specific color and significance behind the symbols. Handmade tools were also used in the craft of tattooing during the Egyptian era. Now they have evolved to more dynamic equipment and use of substance. From care to the final product there is a lot of work that goes into preserving tattoos. Written records, physical remains, and works of art have changed our understanding of Egyptian culture.

There is good reason to believe that Egyptians were beyond their intellectual ability.

Their process of preparing a human as a mummy required countless steps and organization. Ancient writers and modern scientists have both attributed to the knowledge of how this Ancient tradition came about. The remains of Egyptians have been kept preserved because of their tedious attempt in the process of mummification. Mummies, for example, had the protection from chemical exposure, extreme cold conditions, very low humidity, and lack of air when submerged in tombs. The discovery of mummies from Ancient Egypt has also shown us the presence of tattooing.

Research and discoveries have pointed out that the art of tattooing was known to Egyptians, and was one of the common practices that were adopted by them. The tattoos found on their remaining bodies were known to be in many sizes, shapes, and colors. One of the earliest evidence of tattoos was identified on mummies dating all the way back from 2000 B. C. The majority of mummies discovered were identified as female, in which were covered with dot like patterns throughout their bodies. Evidence points to the fact that tattoos were an exclusively used practice among females.

One of the most famous mummies ever written about was Amunet, who was known as a deity or rather a highly known Goddess (Taylor, 1998). Other than being a traditional royal subject, tattoos had significance for female Egyptians. Lineberry (2007), “The tattooing of Ancient Egyptian women had a therapeutic role, and functioned as a permanent form of amulet during the very difficult time of pregnancy and birth” (Tattoos, para 5). Pregnancy and birth can be a life changing experience, and for Egyptian women it was also a particular time that they felt the need for protecting themselves.

The areas in which were most commonly noted with tattoos during this difficult time were on the thighs, breasts, were placed over wrapped mummies to protect them. ” She also points out that, it signified “keeping everything in” (Tattoos, para 5). This pattern is also known as a cicatrix pattern, in which was typically located over the lower pubic region. Tattoos on the abdomen of women, for example, safeguarded them during their pregnancy. As any conscious mother would do for her child, she protects her unborn willingly from harm’s way. Ancient Egyptian tattoos had many other meanings behind their symbols.

Traditionally, Egyptians would use specific drawings as a tribute of sacrifice to a deity. This would mean that an individual would be professing his or her entire belief for someone higher or greater than themselves. Tattoos were presumed to be part of a permanent amulet that could not be lost. An amulet is defined as a trinket, or piece of Jewelry that was thought to have magical protection against evil or disease. In other instances disease would have been another reason that Egyptian females would have acquired a tattoo as well, simply to protect their health while carrying a child.

Their significance in symbols also ranged from medical protection to fertility for women. Many tattoos that were used by Egyptians derived from their writing system, which consisted of pictures and symbols. The Scarab, also known as a eetle, was considered a symbol for renewing life. Madhura (2010), “It was also considered as one of the many royal titles used by the Pharaohs and was also found to be used by Tutankhamen, one of the most famous Egyptian Pharaohs” (Egyptian Tattoo Designs, para 4). He also explains a symbol used called the eye.

Madhura (2010), “The ‘Ankh’ or the eye is a widely identified and used symbol of Egyptian culture. In the ancient times, it represented life and was hence one of the respected symbols. Among the different designs of the Ankh, the eye of the Horus is more popular as it stands for the good luck. The eye of Horus, also known as the eye of the Ra, is believed to be the all-seeing eye that was also used in amulets worn by the ancient Egyptians. The Egyptian cross or the Ankh also stands for rebirth or reincarnation.

The Egyptian eye tattoo represents light, power and royalty and hence, is a favorite tattoo symbol” (Egyptian Tattoo Designs, para 3). Other noted symbols in which were commonly used were the Serket. The Serket is identified as a female fgure with a scorpion on her head. Also used were Kings and Queens, such as Cleopatra, and the Egyptian eye which represents light. Through Egyptian eyes, attoos satisfied various needs and interest as they do today. Their style is captivating and vivid, leading many to believe that this form of art was easily adaptive.

The instruments and tools in which were used for tattooing were dated all the way back to 3000 B. C. An Archaeologist by the name of W. M. F Petrie, discovered a tool with a wooden handle and sharp edge at the site of what was called Abydos. He had noted that the tools “resembled wide, flattened needles that could potentially make the pattern of multiple dots. ” Typically these tools would have been used for areas of the ody that females were tattooed for their pregnancy and childbirth protection. The consistency and color was that of dark or black pigment such as soot.

It has been said that the Inuit tribe used darker pigmentation or bright colors such as yellow for their tattooing. Inuit’s are also known for their “face” tattoos. The tools that are used today have evolved into more intricate ways of use. For example, several needles are used rather than a flat wide needle as the Egyptians had. The more needles you have, the detailed work. Wide range of coloring brings symbols to life as it tells a story. The etails make it look real in a 3D type of way. Instead of soot, ink is the one form of substance that provides color. There are several different types of ink.

One type of ink, for example, is black light ink. When the tattoo is under a black light lamp, it will glow. Colors range from the basic primary and secondary colors to different shades. Another option today is the ability to numb the area in which is being tattooed. Egyptians had no means of covering the painful process in which tattoos involved. The care that we provide today goes into the preservation of the tattoo, making it able o last longer. In order for the tattoo to heal correctly you cannot scrub the area, expose it to sun, and it must be able to breathe.

Care consists of wiping the skin with antibacterial soap, and then applying petroleum Jelly. Petroleum Jelly is more of a pure substance with no additives and it is easier to work with. It is used widely because it does not cause allergic reactions or pull the ink out. Other forms of Jelly include clear A&D Ointment and Bag Balm. No matter what gender a human is, tattoos are more popular today than they were a millennium ago. They represent a erson as an individual, rather than a means for protection.

Technology today has given us the ability to express the art of tattooing on a whole new level. Egyptians introduced this ability, in order for individuals to use tattoos to define their stories or personal experiences. Tattoos were once known as frightening and repulsive, and have come a long way since then. Symbols in Egyptian times have been considered generic compared to todays variety. More attention goes into the care of tattoos in todays society during and afterwards. Care is what aids in the conservation of a eautiful piece of art, whether it is a symbol, picture, or words.

From medical protection to therapeutic means, tattoos were widely used among Egyptians. With the help of discoveries, female mummies have revealed the remains of tattooing on bodies. We can now understand where tattoos originated from, and how meaningful they were so long ago. 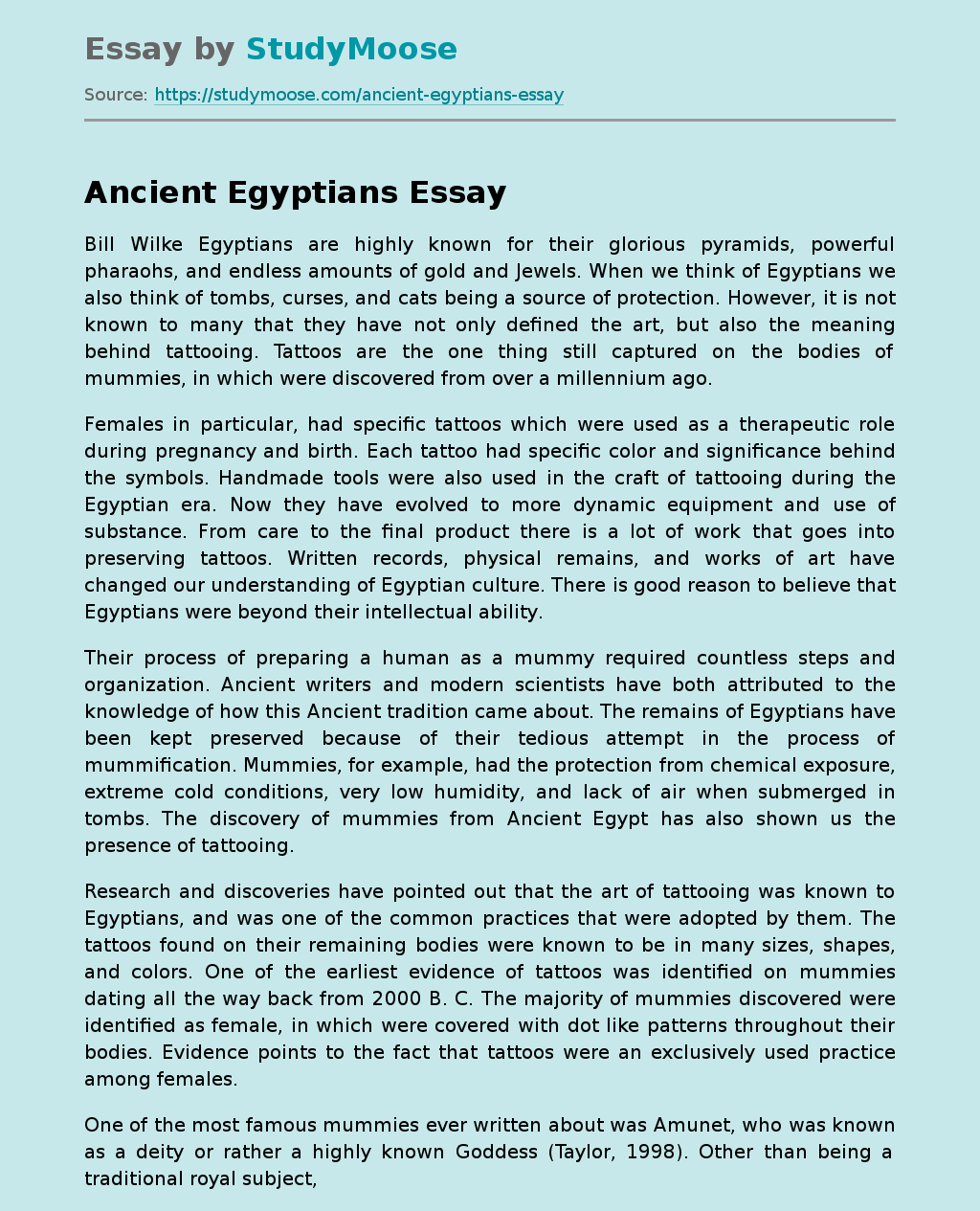