Anastasia Romanov Anastasia was born on June 18, 1901 to Tasar Nicholas II of Russia and his wife Alexandra Fyodorvna (Evans 2009). She was the youngest the five children the couple had. Anastasia had three sisters and one brother: Grand Duchess Tatiana, Grand Duchess Maria, Grand Duchess Olga, and Alexei Nikolaevich of Russia. She was very close to her dad, grandmother, and cousin, Princess Xenia She was stubborn and hated school. She would climb trees and stay in them to avoid school until her dad came and ordered her to get down.

Don't use plagiarized sources. Get your custom essay on
“ Anastasia Romanov a Mystery ”
Get custom paper
NEW! smart matching with writer

Her playmates name was Tatiana Botkin (King). At age 16 she stared to smoke secretly because of stress and tense. Sometimes her sister Olga would Join her (Anastasia). Anastasia was short, had blue eyes, and brown hair which was sometimes said to be blond with a reddish tint (see fg. 1). Fig. 1. This is a picture of Anastasia Romanov when she was younger (Anastasia). During World War I the royal family were kept hostage.

On July 17, 1918 the Bolshevik secret police murdered the Romanov family. They had burt through the doors and started to fire their guns immediately.

The bullets had ricocheted off Anastasia ecause she had diamonds sewed into her clothing (King); she did this so she could carry them palace to palace. There were two bodies that were not found, Anastasias and her brothers, Alexei (Frazpatrick 2005). Women would pretend to be Anastasia. The most famous was Anna Anderson. She had captured the imagination of America and Europe. Other imposters pretended to be other members of the Romanov family but no one could grab the imagination like Anna had.

They also had proof that the other member had died because their bodies were found.

The reason Anna could rab the imagination of America and Europe was because she was the same age, height, weight and also had the same hair and eyes as Anastasia. Anna even had the same deformed foot Just like Anastasia had. Anna had Jumped Offa bridged to commit suicide but was taken to the hospital. She had claimed to be Anastasia and had the story of how she escaped from the soldiers and where she has been hiding. She was “hiding” because she was scared that if someone noticed her than she would be shot and killed (King). Anastasias playmate and cousin had both spoken to

Anna and thought that it was actually Anastasia but later changed their minds (King). Other family members on Anastasia had asked Anna questions and some believed others did not believe her. For the people that did not believe that Anna was Anastasia they came up with their own ideas of what happened to the real Anastasia. Some people thought that the soldiers took pity on her and let her get away. Others had thought that the Bolshevik police had burned her body so that there were no remains left (Anastasia). threw her body down a mineshaft and set of grenades.

She could have gone to her randmother’s house to hide from the police because Anastasia was very close to her grandmother. In 1979 a body of a girl was found by a Soviet architect. In those times there was no way to prove that the body was Anastasia’s. In 1979 the body was buried a second time but was believed to have been Anastasia’s. In the mass grave there were suppose to be eleven bodies but there were only nine ever found. The nine bodies were Tasar Nicholas, Alexandra Fyodorvna, Grand Duchess Tatiana, Grand Duchess Maria, and Grand Duchess Olga.

However, architects found two additional bodies, round the area that they had found Anastasia’s, in 2007 (Young). At this time there were more scientific tools such as DNA testing. Alexei was identified by DNA testing; they used the skull of Maria to identify Alexei. Alexei skull was used to prove Anastasia died in 1918 with the rest of her family. This mystery has been playing with people’s minds ever since the death of the Romanov family. There are people sill today that believe the DNA testing was incorrect. Others think that scientist made up the data so they can say that they solved the mystery. 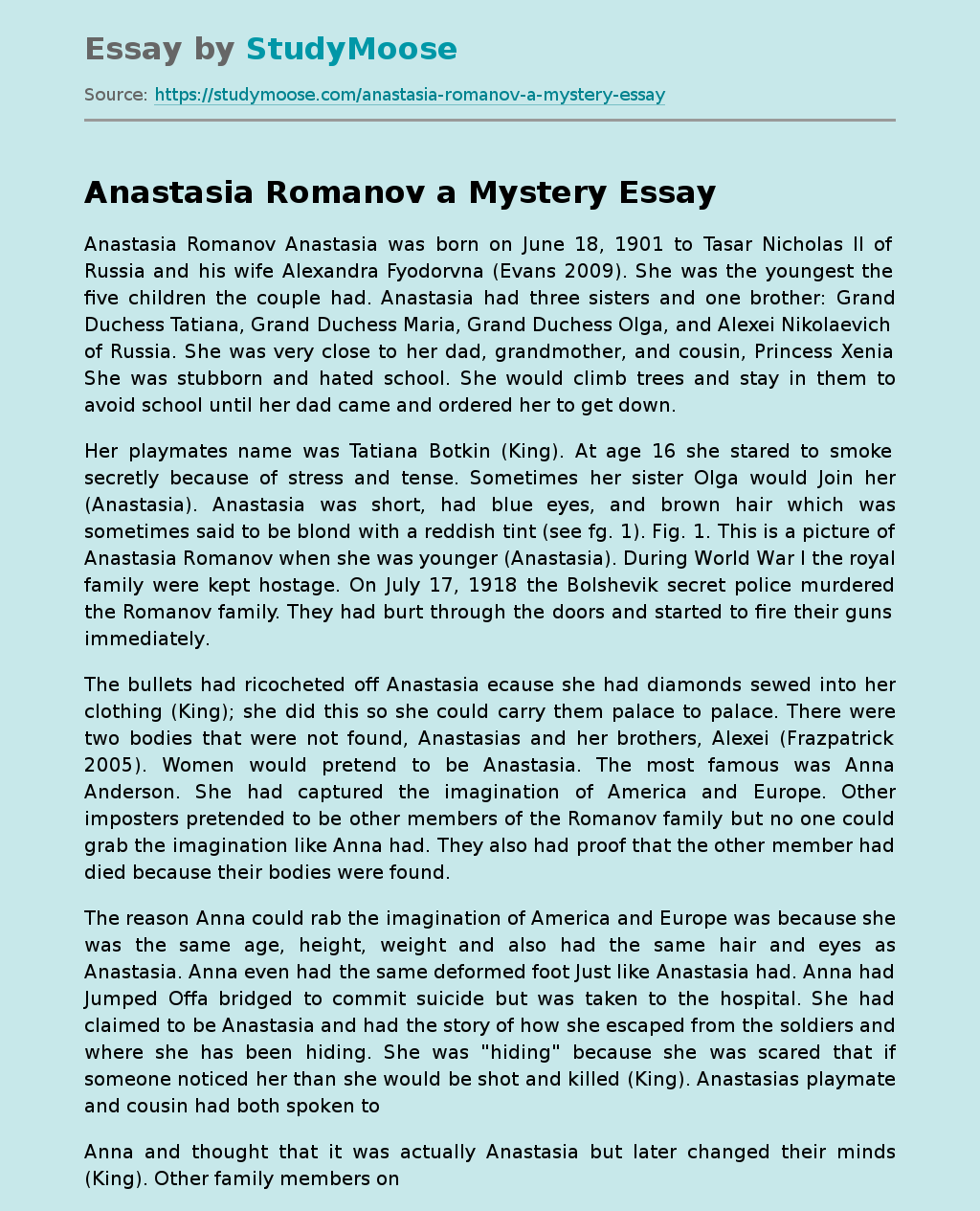