'Do Anarchist demand the impossible'

Anarchism is summed up by their belief in Utopianism. A utopia literally means an ideal or perfect society. Utopianism is a style of political theorising that develops a critique of the existing order by constructing a model if an ideal or perfect alternative. Utopian theories are usually based on assumptions about the unlimited possibilities of human self-development. However, utopianism is often used as a pejorative term to imply deluded or fanciful thinking, a belief in an unrealistic and unachievable goal.

Anarchist demand what others believe to be impossible but what they believe is possible.

Don't use plagiarized sources. Get your custom essay on
“ ‘Do Anarchist demand the impossible’ ”
Get custom paper
NEW! smart matching with writer

This has two implications.

First, Collectivist Anarchists stress nurture over nature and argue that anti-social. Impulses such as selfishness, greed and aggression are not innate but are a reflection of a corrupt society that promotes and rewards these characteristics.

Second, that the deepest human instincts favour sociable, cooperative and gregarious behaviour. Peter Kropotkin explained this in terms of ‘mutual aid’. Which he argued had been developed within human nature through the process of evolution. Kropotkin offered a theory of evolution that contrasted starkly with Darwin.

Darwin stressed that evolution creates benefits of competition and struggle. Kropotkin by contrast stressed the advantages of a “mutual aid” and cooperation. This propensity for mutual aid highlights the possibility of a natural order and spontaneous harmony emphasizing that the state is unnecessary as well as evil.

Collective Anarchist’s do not be relied upon assumptions about human nature alone. They also emphasise that beneficial ethics of certain social institutions, notably ones that foster cooperation and social solidarity and keep self- interest and competition at bay. For a Collective Anarchists common ownership is the social and economic basis for a peaceful, stable and harmonious, yet stateless society, especially in the case of Anarcho-Communism.

First, it is a result of enlightened self- interest. Which reflects the capacity of people using reason to think through the consequences of their actions and to recognise that respect for others and cooperation is always preferable to conflict. Conflict, is self-defeating because it breeds resentment and hostility and other forms which one will eventually suffer.

Secondly, respect for other members of society naturally arises out of the recognition that they like ourselves are rational creatures with appropriate rights and entitlements. The most basic of these rights is individual freedom. Individualist Anarchist however do not rely upon assumptions of human nature alone. They also relied upon social institutions which in their view naturally promotes harmony or equilibrium amongst self- interest individuals. In particular they relied upon the market. Which they regard as a self- regulating mechanism drawing upon the classical economic theories of David Ricardo and Adam Smith. Smith used the metaphor “invisible hand” to highlight the tendency of the market to ensure that each person can only achieve their ends through unintentionally assisting other people in achieving their own ends.

Read what is more important our privacy or national security

However on the other hand, it is believed that Anarchist’s beliefs are more delusion; their goals are impossible to achieve.

The term Utopianism can have a negative or pejorative implications. Suggesting that ideas are hopelessly unrealistic and achievable. Utopianism in this sense refers to an unrealistic dilution or fantasy. This is the major criticism made of Anarchism. Critics of Anarchism usually attack Anarchism on the basis that its model of human nature is an unreliable and hopelessly unrealistic. Anarchist’s effectively highlight the positive aspects of human nature whether this is sociability or rationality and ignore the negative aspects of human nature. Liberals, Conservatives and Socialist Democrats all in different ways highlight the need for the state, based upon negative human characteristics.

'Do Anarchist demand the impossible'. (2020, Jun 01). Retrieved from https://studymoose.com/anarchist-demand-impossible-new-essay 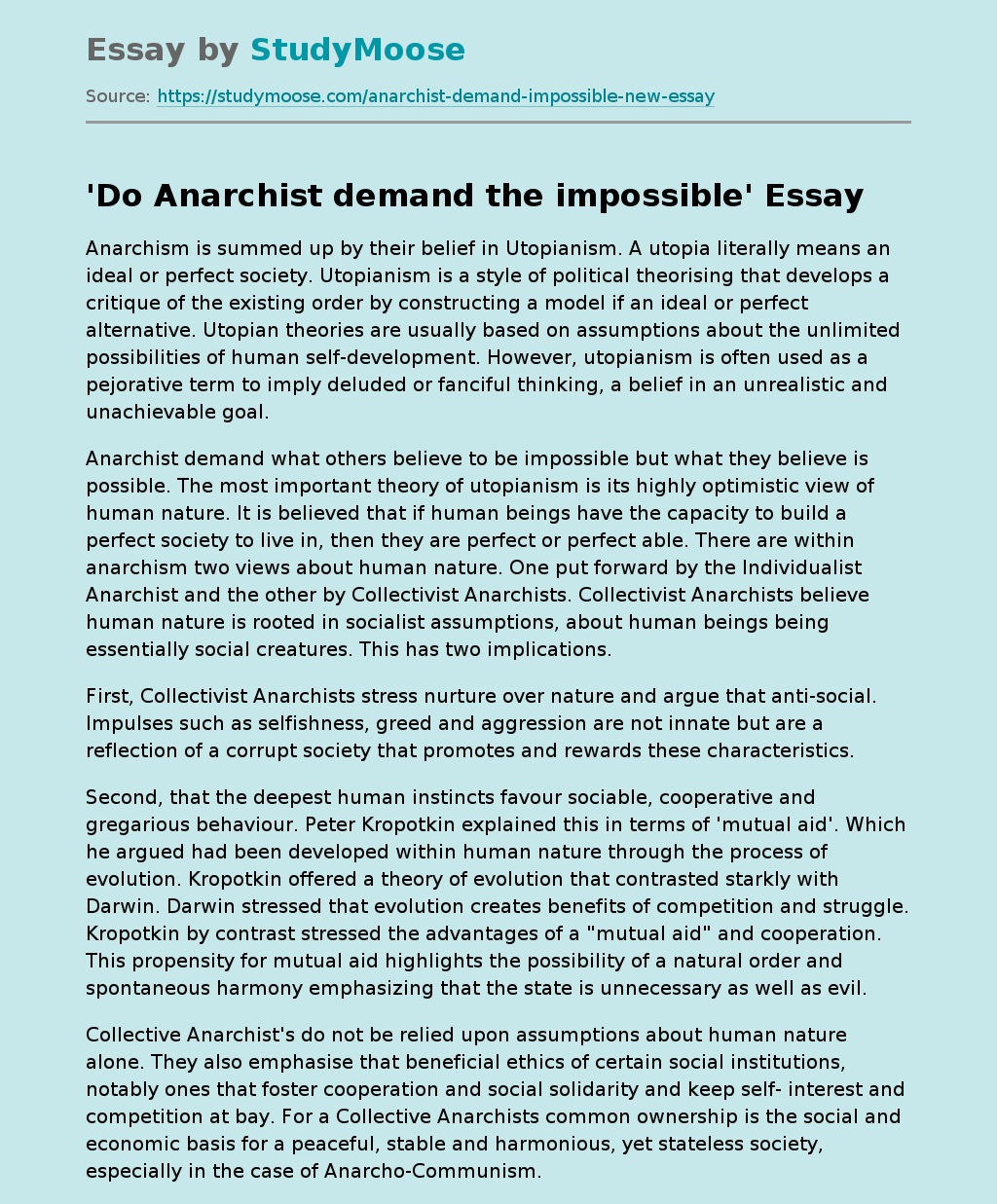