Analyze "I Have a Dream" by Martin Luther King

On August 23, 1963, Martin Luther King Jr., who had always been struggled for the freedom and resistance of racial discrimination, stood in front of Lincoln Memorial and gave a famous speech “I Have a Dream” to 25 million people to fight for their human rights. In Dr. Martin Luther King’s speech, he played multiple Talk Cards such as a compatriot of Negro, a father of four children, a believer, and a normal citizen that wish for the right to vote. Using different cards can raise more resonance from the audience and make people feel more involve in a speech.

Don't use plagiarized sources. Get your custom essay on
“ Analyze “I Have a Dream” by Martin Luther King ”
Get custom paper
NEW! smart matching with writer

I think Dr. King could have also played a card as a leader that can help Negros to overcome the difficulties and lead them to a brighter future where the United State is a place full of freedom and justice.

I think this was a smart move because the speech could comfort the citizens and make them realize that they should stand up and fight for themselves.

Changing the Talk Card could change the overall message because different characters can make people easily experience the same feeling that Dr. King was experiencing and cheer the citizens up. I think the style of Dr. King’s speech is power because the whole speech was very inspiring and it represented a great power of his desperation towards freedom and justice. The main goal of Dr. Martin Luther King is to express how much the Negros want to have the same rights as white man. They could not stand for the discrimination and they were going fight for justice.

The audience that came to hear the speech had the same goal as Dr. King.

They want to fight for the Negros. Dr. King’s Talk Card effectively reach the goal he wanted to express. At the very beginning of the speech Dr. King said “I am happy to join with you today in what will go down in history as the greatest demonstration for freedom in the history of our nation.” His goal is to fight freedom for the Negro and he directly claim that out in the very first sentence of the speech. He used a compatriot card, which all the citizens from the United States were playing the same card, to demonstrate his pursuit of freedom.

That Card Play was very effective to his goal because it could bring all the citizens together and against discrimination, which was exactly what Dr. King tried to accomplish. Confidence, ambition, and motivation were the feelings he invoke in his audience, which were well-express by his tone and his inspiring sentences. This is such a great speech. Dr. King used his talented speech endowment to perform this breathtaking presentation and successfully motivated his audience to stand up and fight for the equal rights and freedom.

References:
“I Have a Dream” Speech, by Martin Luther King, 1963
http://www.archives.gov/press/exhibits/dream-speech.pdf
https://www.youtube.com/watch?v=1UV1fs8lAbg

Analyze "I Have a Dream" by Martin Luther King. (2016, May 07). Retrieved from https://studymoose.com/analyze-i-have-a-dream-by-martin-luther-king-essay 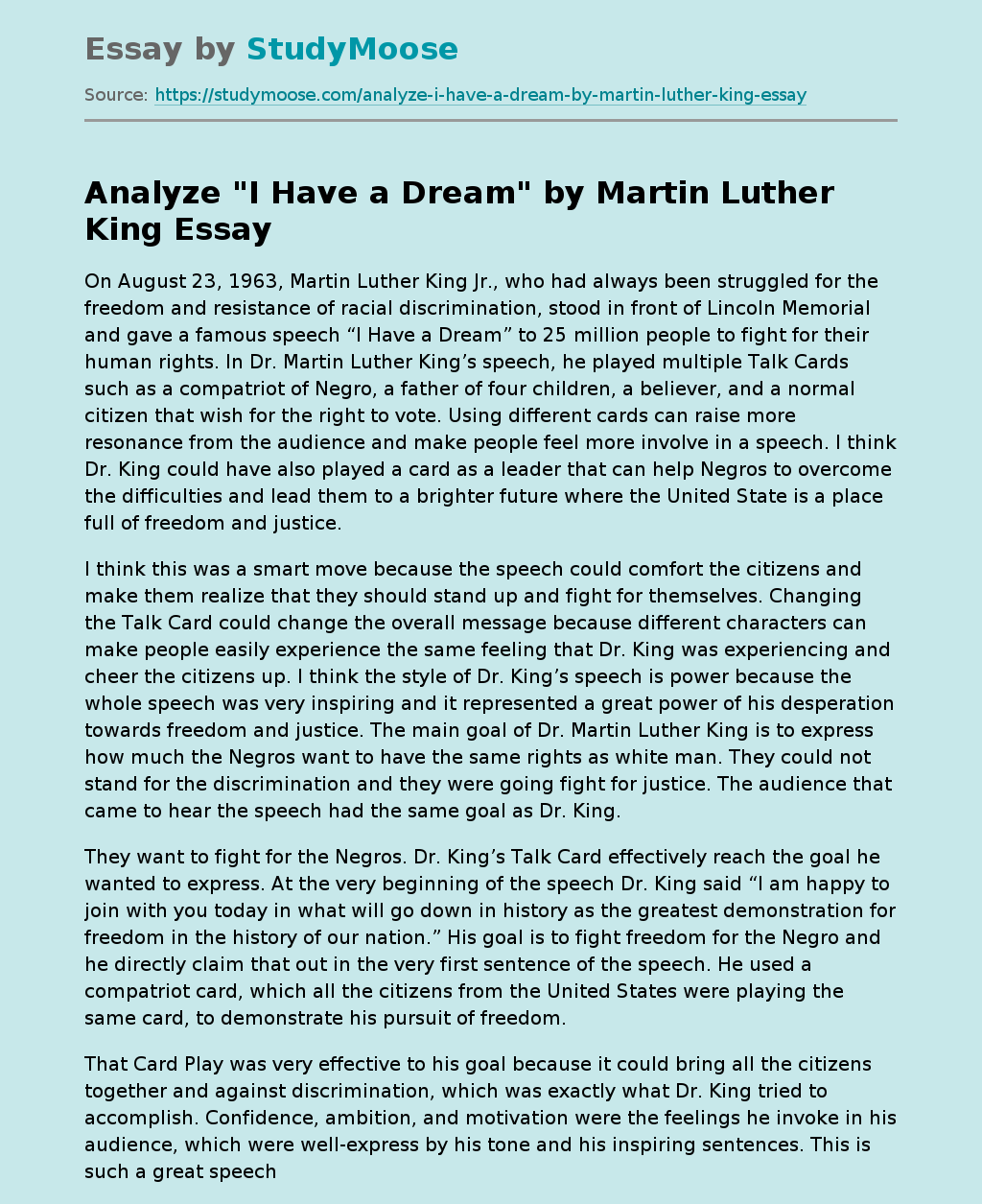