The text under analysis belongs to the pen of William Somerset Maugham, the one of the best known English writers of the 20th century. He was not only a novelist, but also one of the most successful dramatist and short-story writers. He was born in Paris in 1874. His parents died when he was very young. The boy was taken away from the French school, and went for his lessons daily to the apartment of the English clergyman at the church, then he was sent to England to attend school.

Don't use plagiarized sources. Get your custom essay on
“ Analytical Reading “The Luncheon” by Somerset Maugham ”
Get custom paper
NEW! smart matching with writer

In 1890 he went abroad and studied at the University of Heidelberg from which he returned to England in 1892 and became a medical student at St. Thomas’s hospital in London. After that Somerset decided to devote his life to literature. “I didn’t want to be a doctor. I didn’t want to be anything but a writer”. The technique of the short story had always interested Maugham. Somerset Maugham has written 24 plays, 19 novels and a large number of short stories.

At the beginning of the text the narrator, who is the author’s mouthpiece here recognizes a woman with whom he had a lunch several years ago. Then he starts remembering that unforgettable evening: He was a young man, living in Paris and could barely keep body and soul together. She had read his book and wrote a letter to him, expressing her wish to have with him a little luncheon at Foyot’s – a very expensive restaurant. He couldn’t say no to a woman and invited her for lunch.

He had only eighty francs to last him the rest of the month. To his horror she ordered one expensive dish after another. He paid the bill and was left with no money at all. However, at the end of the story, the narrator feels that he has finally had his revenge when he sees that the lady has put on a lot of weight. Compositionally the story falls into 3 parts. The story begins with the exposition, which extends over the first several paragraphs. At the beginning of the text the narrator sees a woman at the theatre in many years since they first met and can hardly recognize her.

Then the author presents a flashback to the past which goes to the last paragraph with a help of the sentence “Did I remember?” which allows us to know what had happened many years ago. Here we learn about the place of action and its time. The reader gets information about the events, preceding the meeting of the main characters and also understands that the narrator was a very poor man. Then come complications, opened with the sentence: ” She was not so young as I expected and in appearance imposing rather than attractive.” The action takes place in the restaurant. Here the reader learns more about the characters. The author describes how this lady enjoys the meal, ordering the most expensive dishes and he is wondering about the bill. The bill was finally paid and the narrator found himself with not a penny left in his pocket for the whole month.

After it the author comes back to the present time and here comes the climax. Now, after 20 years had passed by, the narrator has had his revenge at last because “Today she weighs twenty-one stone”. This story is a first-person narrative. The dialogues are predominant in the complications – the biggest part of the text. The general atmosphere of the text is emotional and ironical (even the title “The Luncheon” is ironical, because the word “luncheon” means a “light snack”, but in fact it turned to be an abundant and very expensive meal), but also strained (“I watched the abandoned woman thrust them down her throat in large voluptuous mouthfuls, and in my polite way I discoursed on the condition of the drama in the Balkans.”; ” Panic seized me. It was not a question now of how much money I should have left over for the rest of the month, but whether I had enough to pay the bill.”).

The tone of this story is ironical. The author uses direct (“But I was flattered, and I was too young to have learned to say no to a woman”; “I watched the abandoned woman thrust them down her throat…”) and indirect methods of characterization. The characters are presented through their actions, descriptions of the outward appearance and things that surround the characters. The waiter might be called a minor character. To my mind the woman is smart, gluttonous, selfish, cold, indiscreet. She is a villain who serves a foil to the protagonist. By constantly repeating her ironic expression ” I never eat more than one thing ” she emphasized the conflict between what she says and what she does. The author – the protagonist, is a poor, kind, honest and sincere man. The author’s style is vivid, clear and emotional. The author uses stylistic devices sparingly. In my opinion there is an external conflict in this story.

The theme of this story is appearance against reality. Everything in the story is not really what it seems to be. The narrator expected to have a little luncheon with a beautiful lady. But it turned to be an expensive meal with an unattractive woman. This woman repeats “I never eat anything for luncheon”, but eats everything she can. I think that the author’s message “the appearance is not yet the reality” is very important and relevant today. 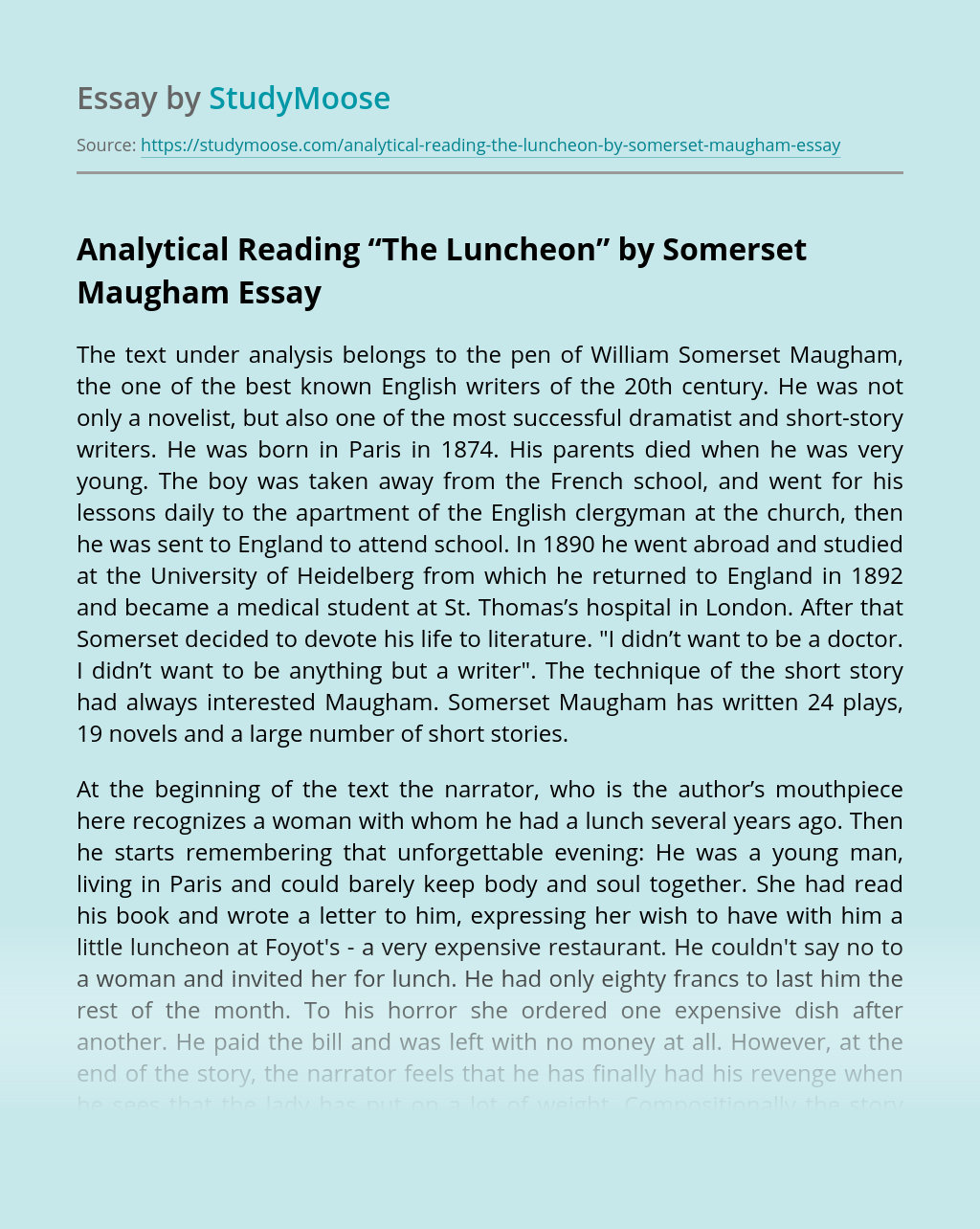