The world is constantly in change. For the better? That can be discussed; but as humans we are evolving and trying to make our everyday life easier day by day. For example, the Roomba, which is a small, round, autonomous vacuum cleaner that easily cleans the house and makes life somewhat easier. For the past decade robots have been publicized in movies as both good and evil. In the real-world robots are a big dilemma; questions as: should we use them for taking care of people? Even love people and be in a relationship with a human often comes up.

Don't use plagiarized sources. Get your custom essay on
“ Analytical Essay on ‘Supertoys Last All Summer Long’ ”
Get custom paper
NEW! smart matching with writer

Robots that have a mind of their own and can hold a normal conversation with a human, have already been invented.

In the short story ‘Supertoys Last All Summer Long’ by the British science fiction author, Brian Aldiss, published in 1969, we are introduced to a family living in a high-tech house, with robots. The story discusses subjects as loneliness and also gives an input on the question: is AI (artificial intelligence) actually a good thing/ invention? Aldiss also hints to ethical questions surrounding overpopulation and what to do about it.

In the story we are introduced to Monica, her husband, Henry, their son David and Teddy a bear.

Monica Swinton is described as ‘twenty- nine of graceful shape and lambent eye’. In the story she is presented as feeling lonely, perhaps because her husband is rarely home because of work. All though she is a mother, she has a hard time connecting with her son, David.

She feels alone and David can also sense it. She is a round character with a complex personality. She tries to love David, but her heart wants something else, perhaps something real, something organic. It appears like she is waiting for something, which makes her reticent and closed off. For instance, on page one in the story, we are told, she changes the wavelength of her windows and makes the city centre rise, full of people, but she keeps the sound down; this could be a sign of her feeling lonely and feeling like, time is just passing by.

David is a five years old boy, with dark hair. Just like his mom has a hard time connecting with him, he feels the same way. He has a hard time expressing his love for his mother, and therefore he has been trying to write a letter to her. Teddy who is David?s friend and is a robot- bear that specialises in comfort, tries to help and support David. David asks Teddy: ‘You and I are real, Teddy, aren?t we’? (page 2, paragraph 3). Most five years olds cannot comprehend big questions regarding time, reality and even love; this hints to the possibility of David being a special boy. At the end of the story, Monica tells her husband, Henry about David?s verbal communication centre troubling him and therefore, they are thinking about sending him back to the factory. This information proves that David is in fact a robot with AI. Even though David is a robot, he behaves like a typical five years old boy, this can be seen on page one, where he jumps in the pool while wearing his sandals and on page 3 where David hides from his mother. Through the story we can sense that David is disconcerted about his life and is concerned about Monica. Although we do not know how much of David?s behaviour and feelings are programmed, he tries to express his love and understanding to his mother through letters. Though Monica has a hard time connecting with him, he is clear of his feelings towards her, and even before going inside he plucks a bright pink flower and takes it with him. The rose could lie on the pillow as he went to sleep, as the story says: ‘Its beauty and softness reminded him of Mummy’.

Teddy is a robot bear that specialises in comfort. It helps Monica and David in their day to day life. He is programmed to speak the truth and is very reliable and sincere. Although he does not understand Monica nor David?s situation he tries to guide them the best his brain can. Teddy?s brain is simply programmed, thus making him a flat and simple character. He only speaks when spoken to, this can be one of the reasons why Monica has an easier time talking to him than David.

Henry is Monica?s husband and father to David. Not a lot of information is found in the story, but we do know that he with Monica lives in ‘one of the ritziest city- blocks’. His relationship with David is not clear, and we as readers do not know, whether he shares the same complicated, detached relationship to David like Monica. When Henry came back from work, Monica told him they have won this week’s parenthood lottery and can conceive a child. They start to celebrate and later realise that David and Teddy are watching them. Despite having a child Monica still feels lonely and is very happy telling Henry the news.

The story takes place in the house of Mr. and Mrs. Swinton. They live in one of the ritziest city- blocks, in a house without windows. The world they live in, is overpopulated and reproduction is strictly controlled by the government and before conceiving a baby you have to get permission.

They are surrounded by robots, from their synthetic serving man to Teddy and even their son, David, from this we can be sure of saying, the story takes place in the future and maybe even the near future.

It seems like the wealthy people are trying to hide from the overpopulated world, almost like our world today. The wealthy people have isolated themselves from the ‘outer world’, with help from technology and as in the story do not even want windows in their houses because it would make them conscious. In our world today, the feeling of loneliness is quite common, and some would say that we need robots to make the world a better place. Robots have shown to help people with stress and memory loss and as in the story helped a family that was not allowed a child to have one, even if it was not human it behaved similarly to a regular 5 years old.

The story can give us an idea of how the world maybe wind up looking like, and in addition to this help us answer some of the questions that are appearing in the media. Robots are for some only supposed to appear on television 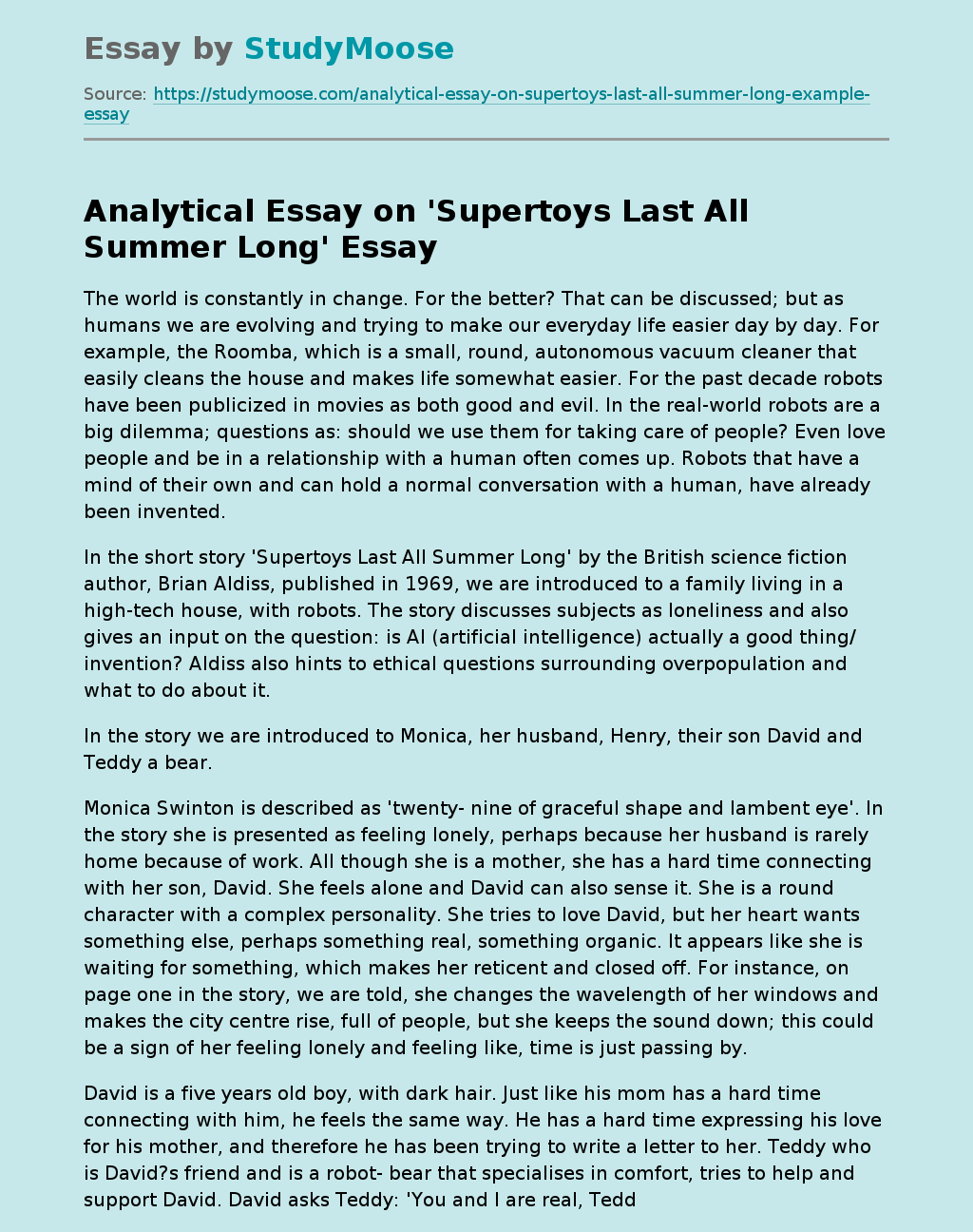