Analytical essay on Primo Levi's "If This Is a Man"

Primo Levi’s book ‘If This Is a Man’ is a novel about a German concentration camp, one among many novels on the same subject. However, this book is exceptional as Levi never ‘raises his voice, complains, or attributes blame’. ‘If This Is a Man’ is an objective story told in a detached tone using scientific language, which sometimes makes this book not a confession but an analysis. Nevertheless, distant tone and unemotional language bring the horrifying message across with even greater impact on readers.

Don't use plagiarized sources. Get your custom essay on
“ Analytical essay on Primo Levi’s “If This Is a Man” ”
Get custom paper
NEW! smart matching with writer

The saddest, the most powerful, and the most ironic chapter of the book is the central ninth chapter, called ‘The Drowned and the Saved’. Here the author’s talent as well as his training as chemist comes through in unique manner. Instead of telling the story, Levi analyses the reasons, the methods, and the effects of German concentration camps. The result is more like an essay or even lab report rather than a part of a novel.

The diction of the chapter is sharply contrasted with its content, emphasizing the terrifying events described.

Already the first sentence of the chapter (“What we have so far said and will say concerns the ambiguous life of the Lager.” P. 102) reveals a lot. This sentence is the first step in building up the emotionless tone through technical diction. The first person point of view used throughout previous chapters is suddenly replaced by the pronoun “we” as it is used in official documents. With every following sentence, the dryness of expression grows gradually: “To this question we feel that we have to reply in the affirmative.

The impact of language is reinforced by the structure of the chapter. As Primo Levi names the Lager to be an experiment, he writes his analysis of the reasons and effects of the concentration camp in the form of a lab report. One can clearly distinguish statement of purpose, method statement, hypothesis, observations, conditions, and conclusion – all the important parts of a lab report. However, as said before the detachedness of the structure is in sharp contrast with the content. For example, the “method statement” (“Thousands of individuals… are enclosed within barbed wire: there they live a regular, controlled life which is identical for all and inadequate to all needs…” p. 102) describes plainly and understatedly terrifying conditions of the camp.

Levi does not complain, he just says that the conditions are “inadequate to all needs” but the underestimation brings the message across more powerfully, especially when compared to previous chapters. Similarly, the author writes: “And one must take into account a definite cushioning effect exercised both by the law, and by the moral state which constitutes a self-imposed law;” (p. 103), a statement, describing the conditions of “the experiment”, implying that there is no law or sense of morality in the camps. However, yet again, there are no protests or grumbles, and the reader has to find the meaning behind the statement himself.

“Variables” in the experiment are two categories of men – the saved and the drowned. Sudden change of tone – from official to poetic and back to official – is used to accentuate the difference among the prisoners, to bring it across for the reader that in the Lager the only choice was either to survive or to die. Everyone struggles to survive and in this brutal exertion, all means are justified. “If some Null Achtzehn vacillates, he will find no one to extend a helping hand; on the contrary, someone will knock him aside…” (p. 103). With this line author clearly states the moral of the camps: if I’m not for myself, who will be for me? With bitter irony Levi avers that the law “to he that has will be given; to he that has not will be taken away.” (p. 104) is openly at work in the camp and to obey this law is the only possible way to survive. Thus, the morality of the Lager is the antithesis of morality of normal life the way the concentration camp itself is antithesis of normal world. This passage is even more sarcastic when the fact that Primo Levi himself was not particularly strong and capable prisoner but rather a ‘muselman’.

However, as it has been mentioned in the beginning of this essay, Primo Levi’s book is different from other novels on the same topic. All the writers have shown the brutal morality, or rather immorality of the Lager and deduced from it that “the Häftling is… a man without inhibitions” (p. 103) thus giving up on the humankind. Levi’s attitude is different. He believes that humanity of the prisoners is still hidden deep in their souls waiting for an opportunity to recover. (“…in the face of driving necessity and physical disabilities many social habits and instincts are reduced to silence.” p. 103) and as it becomes evident in the end of the book, he proves to be right.

Another fact worth mentioning about this chapter is that the title “The Drowned and the Saved” used to be also the title of the English translation of the novel, indicating hence the importance of the chapter.

As a conclusion it can be said that the novel ‘If This is a Man’ by Primo Levi and especially the ninth chapter is a unique account of the horrifying actions carried out in German concentration camps as it tells the story unemotionally using scientific diction to accentuate the seriousness of matter discussed. Analysis of the reasons behind setting up the Lager, methods used to break down human soul and the effects of the actions carried out by SS officials gives an appalling insight to one of the most horrifying events of the 20th century.

Analytical essay on Primo Levi's "If This Is a Man". (2016, Jun 26). Retrieved from https://studymoose.com/analytical-essay-on-primo-levis-if-this-is-a-man-essay 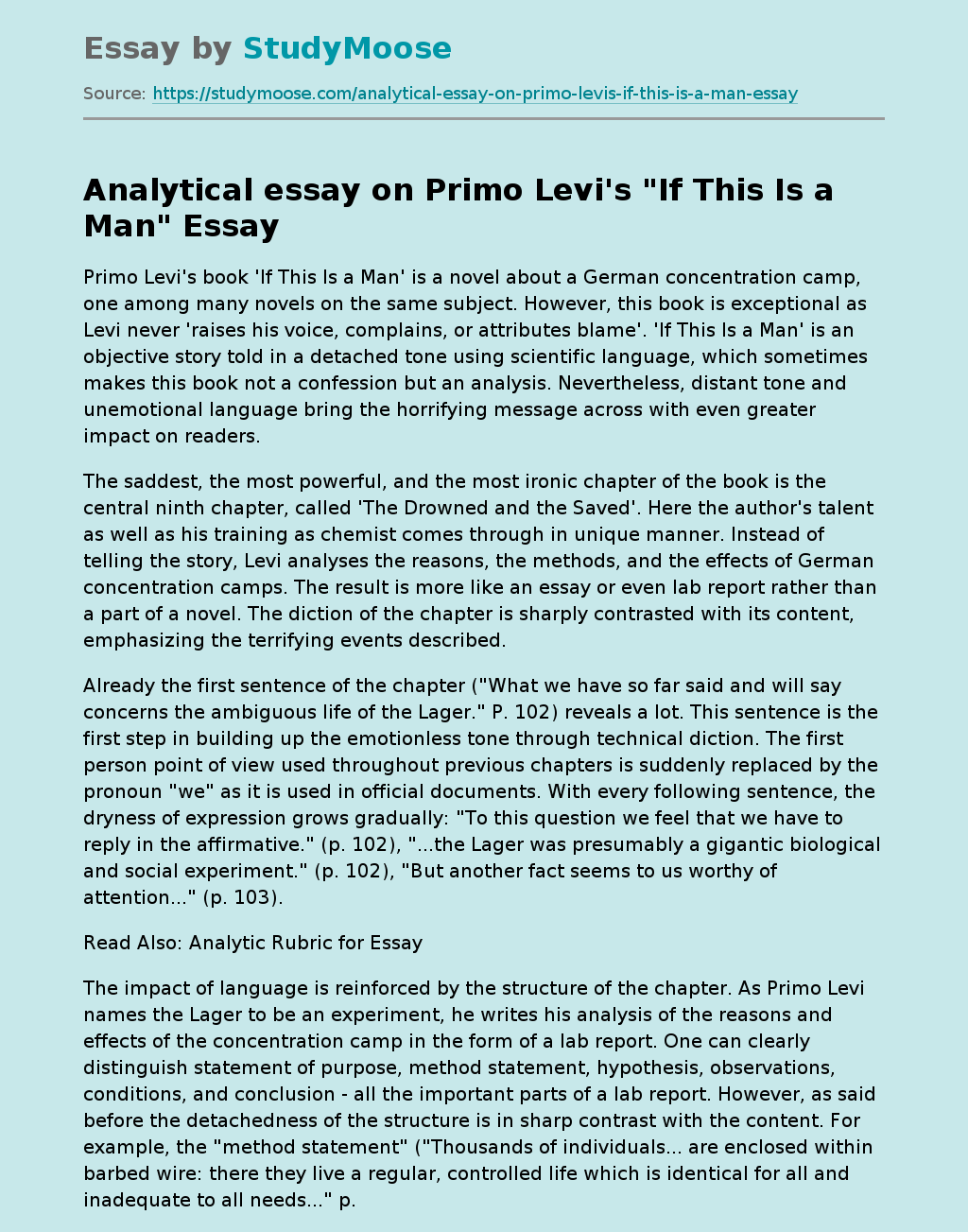