Abnormal and captivating. These would be some of the keywords of the essay Tusk by Joyce Carol Oates. It tells the story of a young boy named Roland Landrau, but he addresses himself as Tusk. Tusk is somewhat Roland’s alter-ego where he in his mind is the cool guy at school. Already in the first sentence of the story, it pulls the reader in and reeks of something wrong and something exciting. “As the knife fitted into Tusk’s hand, an idea fitted into his head”[1] The story begins in medias res and grips the reader from the very start.

Don't use plagiarized sources. Get your custom essay on
“ Analysis of Tusk by Joyce Carol Oates ”
Get custom paper
NEW! smart matching with writer

The fact that Oates rushes into the story and at the same time introduces a knife in the hand of the main character would be reasons to keep on reading. The wordplay is also noticeable in this sentence with the way she uses the verb “fitted” both physically with a knife in the hand and mentally with an idea in the head.

Tusk’s father is dead and his mother is his only provider. His father was a tough man with his own methods on raising a child. “Roland junior who never seemed to learn (dumb-ass kid! t’s hard to feel sorry for such a shithead) that he must look Daddy in the eye and not shrink or cringe or bust into tears which really infuriated Daddy…[2]” Tusk has a lot of schizophrenic tendencies which is show in the narrative technique. In the quote above he distances himself from his past and weaknesses by narrating of himself in third person.

He no longer sees himself as the person he claims Roland junior were. The fact that he has baptized himself Tusk is also a sign of this.

He speaks of Roland junior as a little weak kid and of Tusk almost as an awesome super-human. The way the passage I have chosen is written, is also a sign of how it is to be inside Tusk’s head. He disengages himself from his former self and even insults this Roland junior who was cowering for his dad. The father’s behaviour must have had an impact on his level of respect for this man. This is based on the passage I have chosen and the fact that “Daddy” is spelled with a capital D. The story is written as one big stream of content.

It narrates how it is inside Tusk’s head, his exact thoughts and his imaginations. The “i” after the exclamation mark is not capitalized while the “D” in Daddy is. This shows his thoughts and that he maybe subconsciously respects him a lot. “Alyse is, for sure, sex-y. What guys in high school call a cock-tease, and she hangs out with them so they should know”[3] As earlier mentioned, the story is told as if the reader is inside Tusk’s head. In the above segment, Tusk is talking to himself inside his head.

In the text, some words and passages are written in italics[4]. These passages create a sort of third voice inside Tusk’s head. As Tusk is the narrator, the reader already pictures him talking to himself and telling his own story. But these passages in italics are used some places as Tusk putting words in his mouth that he normally wouldn’t use. It seems as if Tusk imagines somebody else saying these words or actually imagines a situation where those words are used. “Was a time he’d been Roland junior… Baptized himself Tusk. Where this name came from, he didn’t know.

Only a few kids called him Tusk but one day they all would. ”[5] At other points in the story, the italics are used as some sort of speaker inside Tusk’s head. As if his life was a trailer to an action movie. As if there was a commentary to his life. This could be a result of his life actually not being anything special and therefore he would imagine himself starring in an exciting action movie. The italics are also added to create a third effect. At points in the story, Oates uses onomatopoeia words to picture how Tusk’s mind is working.

At times, as explained earlier, Tusk has this sort of side-input to the narration in his head. “For all he needs is positioning and leverage. And the right timing. As in XXX-RATED. Strike by surprise! Rapid fire and stop and pop pop pop! Game over. ”[6] I believe that sounds inside his head are, as mentioned before, him imagining different scenarios happening inside his head. XXX-RATED seems like an r-rated video game that Tusk would be playing in his spare time. He is so indoctrinated in the whole technological society that his mind becomes the movie or the video game.

This could be the author’s way of warning the reader about today’s society. Making the reader aware about the fact that many children just sit at home, watching TV or playing video games all by themselves. In Tusk’s case it has probably become a bigger influence on him than his mother. The TV and the video games have affected Tusk so much that his mind is thinking in these codes. But the major reason for Tusk’s flickering mind is his father. The fact that he never had a father figure to look up to and that he treated him the way he did. 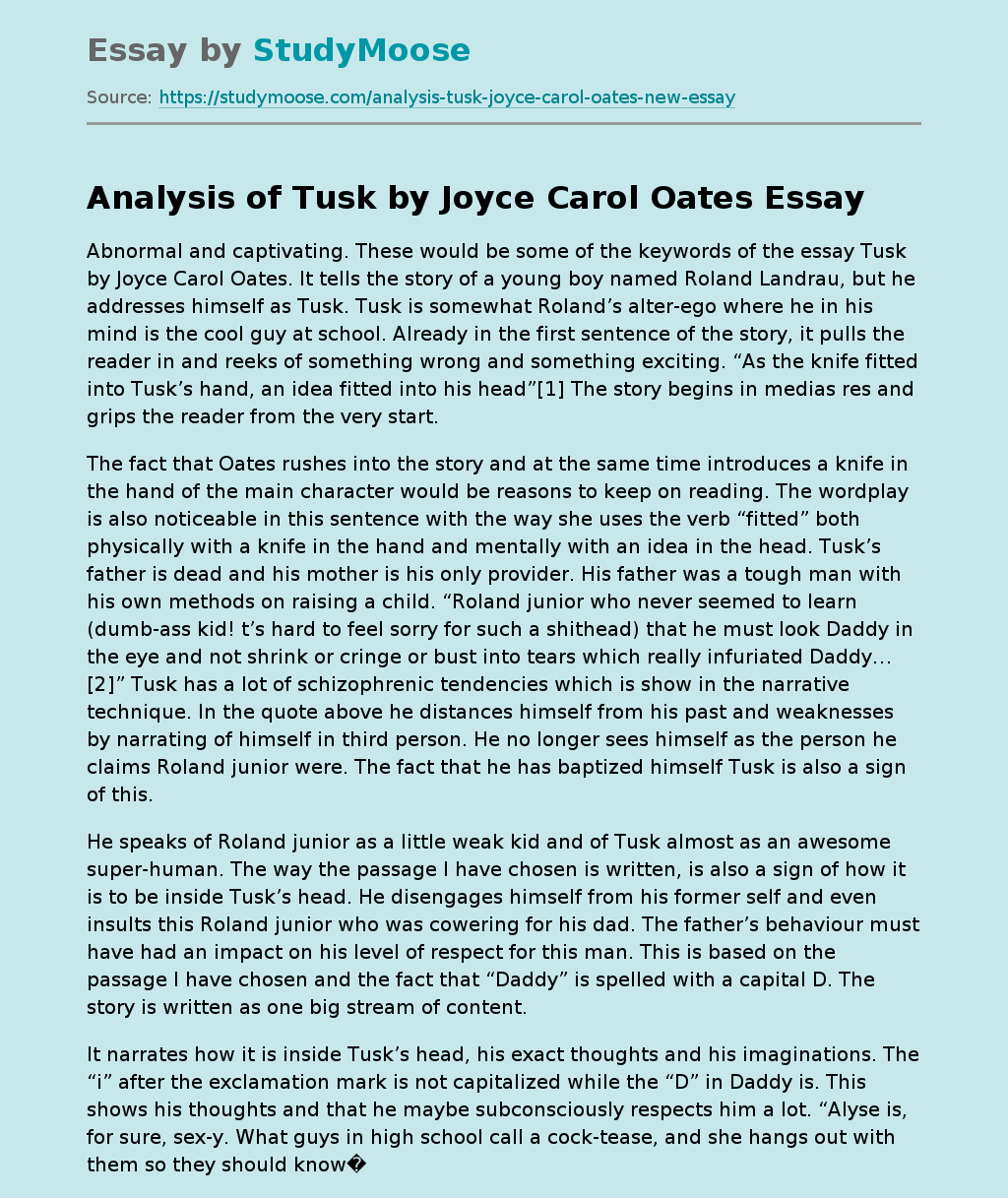