Analysis "The Story Of An Hour" by Kate Chopin

The short story ‘The Story Of An Hour’ written by Kate Chopin is a story about a woman, Mrs. Mallard who is delivered the shocking news that her husband has died in a train accident.

Overwhelmed by her husband’s sudden death, she excuses herself and rapidly rushes to her room where we see her different side of her outlook. She has decided on a different aspect of life, she is shocked about her husband’s accidental death, but she has something to be happy about it.

Don't use plagiarized sources. Get your custom essay on
“ Analysis “The Story Of An Hour” by Kate Chopin ”
Get custom paper
NEW! smart matching with writer

Momentarily that her husband has died, Mrs. Mallard is happy because she is now free from her husband. ‘The Story of an Hour’ was written in an era when women didn’t have enough power to live their life independently. Women stayed in their house and took care of their family, while their spouses went for work.

Women waited for the attention and their outlooks were never listened to or analyzed. Indeed though women had wishes and emotions, those emotions have never listened.

Women did not attempt to speak about their feelings or their rights, it was just not taken off at that time. The story is an instance judgment through the passionate personality of Louise Mallard, the decline of the spirit of her persona in her marriage, and the average happiness, she endures whilst given a taste of the independence that freedom could endure.

The major theme in Kate Chopin’s story is independence. At the start of the story, Mrs. Mallard has been revealed that her husband has died in a train accident. Mrs. Mallard acts to this news as any wife feels. ‘She did not hear the story as many women have heard the same, with a paralyzed inability to accepts its significance’ (443). She is shocked so she excuses herself and rushes off to her room to be distant from everyone so ‘she would have no one to follow her’ (443). While in her room her side is completely different. She seems happy, she is upset too that her husband has died but now she newfound freedom that she didn’t have earlier. Mrs. Mallard coming out of her scale, once she is behind the closed doors she can positively show what she is thinking. Mrs. Mallard still in some sense that knows her place; she knows that she tried not to reveal certain feelings in front of her relatives and companions. ‘She was beginning to recognize this thing was approaching to possess her, and she was striving to beat it back with her will—–as powerless as her two white slender hands would have been’ (443).

For some reason, she knows her status in the community and even though her husband has gone she assumed to keep that development of women at the time. Mrs. Mallard is reborn again. She is now free, free from the obscuration of her husband. Mrs. Mallard is up in her room, standing in front of her window and everything around her is in full efflorescence, springtime has arrived. ‘When she abandoned herself a little whispered word escaped her slightly parted lips. She said it over and over under the breath: ‘free, free, free!’ The vacant stare and the look of terror that had followed it went from her eyes. They stayed keen and bright’ (443). Winter has gone and spring has been born. For some reason, this refers to Mrs. Mallard the winter being her husband has now died and spring being her newfound independence has been given. ‘Her pulses beat fast, and the coursing blood warmed and relaxed every inch of her body’ (443).

The smell of rain is in the air, and that can describe a form of recovery. ‘She could see in the open square before her house the tops of trees that were all aquiver with the new spring life. The delicious breath of rain was in the air. In the street below a peddler was crying his wares’ (443). The same fits here for Mrs. Mallard, for some reason she is purified, she is now free, free to live her life the way that she wants without having to clarify to anyone, also not her husband. Mrs. Mallard knows that she can truly live for herself and no one else. She knows that she can be her person. ‘There would be no one to live for during those coming years; she would live for herself. There would be no powerful will bending hers in that blind persistence with which men and women believe they have a right to impose a private will upon a fellow-creature’ (443). Mrs. Mallard knows now that she only has to live with herself. She does not have to make anyone happy but herself. She is living her life the way she wants to, she is not going to be attached to her husband.

She loved her husband, but when she heard the news, she thought she was finally free and could do what she wanted, she felt happy and sad that her husband was left. She is a tough woman inside when she thinks her spouse was no longer going to be nearby, she thought of all the things that were going to come here in the future for her ‘Free! Body and soul free! She kept whispering’ (443). Mrs. Mallard’s sister Josephine was very worried when she locked herself in a room, but she only needed time to process the things that happened suddenly. When Josephine requested Louise to open the door, she was worried about Mrs. Mallards making herself sick because of her heart problem. ‘Louise, open the door! I beg; open the door—-you will make yourself ill’ (443). The twist in this condition is that Louise is feeling happy and enduring the fact that she has the rest of her life by herself. She is far away from the feeling of illness which Josephine thinks.

In actuality, Louise is feeling great and happy about the things that are coming in her life, ‘she was drinking in a very elixir of life through that open window’ (443). Mrs. Mallard finally compasses herself and comes out of her bedroom to make an illusion downstairs again. As she walks down the stairs Mrs. Mallard gets the surprise of her life, ‘Someone was opening the front door with a latchkey. It was Brently Mallard who entered, a little travel-stained, composedly carrying his grip-sack and umbrella. He had been far from the scene of the accident and did not even know there had been one. He stood amazed at Josephine’s piercing cry; at Richards’ quick motion to screen him from the view of his wife’ (444). At that moment, Mrs. Mallard falls to the floor and ‘when the doctors came they said she had died of heart disease—- of joy that kills’ (444) knowing that her freedom had now been taken away from her in an hour.

Analysis "The Story Of An Hour" by Kate Chopin. (2016, Sep 17). Retrieved from https://studymoose.com/analysis-the-story-of-an-hour-by-kate-chopin-essay 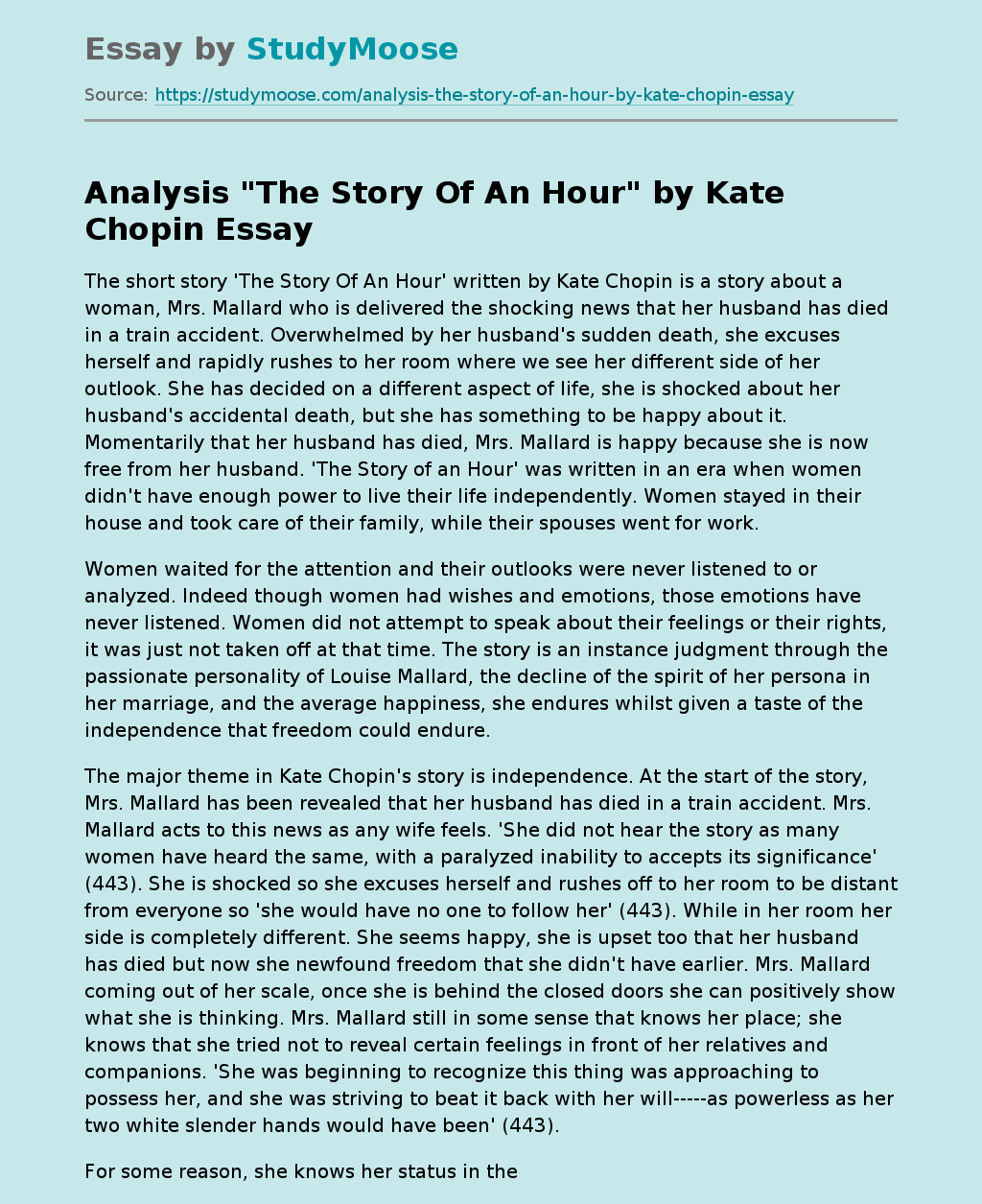