There is something to be said for a man who can look deeply into his profession and define exactly what is that he does. The deaths of many men have passed without a definition of their lives, or a true understanding of what they do. In his poem “On Modern Poetry,” Wallace Stevens attempts to define his life’s work and his passion. To a poet “On Modern Poetry” serves as both a guidebook and a wonderful example of what makes poetics an amazing art.

Don't use plagiarized sources. Get your custom essay on
“ Analysis of Wallace Stevens’ “On Modern Poetry” ”
Get custom paper
NEW! smart matching with writer

Stevens uses his talent to explain his talent, taking the reader on a wonderful journey through the process of poem creation, and through the human mind. The aforementioned guidelines that Wallace details in “On Modern Poetry” are dead on and may have shaped the way that poems are created to this day. He captured the true essence of poetics while allowing the reader to continue doing their job, using their mind and their imagination. Stevens weaves a visual path through the job description of a poem and leaves the reader wondering what is said, and how to take it.

The journey of poem writing is a perplexing one, especially in the area of method. When Wallace Stevens opens “On Modern Poetry” with the line: “The poem of the mind in the act of finding/What will suffice” (ll. 1-2). He is detailing the struggle to find the right word, the right scheme, or the right time for change. He then follows with: “It has not always had/To find: the scene was set; it repeated what/Was in the script” (ll.

2-4). This is in reference to change and the modernist/imagist view of poetry in the past. This could be taken as a derogatory comment to the simplicity and complacency of past poetry. Regardless, I tend to take it as a comment on the overall state of poetry, a look at the past, but a welcoming of the state of current poetry. The first stanza of the poem simply details the struggles of a changing genre, and uses descriptive diction to do that.

One great thing about a poem is that it leaves room for thought, for personal development, and for individual interpretation. Not only does “On Modern Poetry” do those things, but it also tells the reader to do them. “A metaphysician in the dark, twanging/An instrument, twanging a wiry string that gives/Sounds passing through a sudden rightnesses, wholly/Containing the mind…” (ll. 20-23). The lines in themselves are perplexing and leave plenty of room for interpretation. But what a reader comes to conclude is that Stevens is suggesting that a poem buries itself within the human mind and plants a seed. The poem acts as a seed to thought, and it exercises the mind on a regular basis. A good poem is one that makes the reader think, and not just about the words, but about themselves and about their mind.

The idea of a poem as a performer, be it an actor in a play, or a musician playing an instrument, or a metaphysician playing an instrument is one of particular interest. Stevens uses the metaphor throughout the poem and does so quite well. The duality of the performer as the poet allows for a wide range of comparison and gives way to a multitude of metaphors. In the following lines Stevens uses the idea of a actor on stage to present the depth of a poems words:

“…speak words that in the ear,

In the delicatest ear of the mind, repeat,

Exactly, that which it wants to hear, at the sound

Of which, and invisible audience listens,

Not to the play, but to itself, expressed

In an emotion as of two people, as of two

The lines represent the idea that a poem must cross over from reality to a level that talks to the reader and allows them to listen to their thoughts and not just the poem. The poem becomes simply a vehicle for the human mind; it opens doors and allows the reader to read about themselves.

When Stevens enters the second stanza he begins to give his guidelines for modern poetry:

“It has to be living, to learn the speech of the place.

The women of the time. It has to think about war

The lines in themselves are quite simple, in their original form. They provide simple rules, but rules that were fairly modern during this time. The idea of including the meeting of women provides a fairly modern concept in concern to women’s rights and public recognition. Poems have always been concerned with war, or with human suffering, but the modern idea of thinking of war provides an example of being both positive and tragic. The past hundred years had been fairly rose-colored, but beginning in the 1930’s America took a turn for the worse and thus provided a reason to consider human tragedy. For a poem to be living and to learn the speech of the place simply means it must me modern, or current.

The final four lines are more intriguing and seem more complex than all of the previous lines. They seem to be putting into action the ideas of the poem so far. He gives examples of what things would work as “modern poetry”. Modern poetry must find satisfaction, and some ways in which that may be achieved is through the discussion of a man skating or of a woman dancing or combing her hair. These things must exercise the mind though. Modern poems cannot simply describe the action, but must look beyond the action, from the subject, to the writer, to the reader.

While I cannot claim to fully understand Stevens’ view of modern poetry, I feel that through his poem I can form some conclusions about his beliefs. Wallace Stevens was not a highly renowned scholar, but he did have an understanding of what he was writing. He could describe his work, and he could put it on paper for others to see. As a student now finally gaining a respect for poetry it is nice to see what a poem writer thinks about his job. It is amazing to see that a poem can be made of any topic, and maybe that provides another point in the description of poetry. In a 28-line poem Wallace succeeds in providing a guidebook in the writing of good poetry, and gives the reader a lot to think about. But, as Wallace says himself, “The poem of the act of the mind” (l. 28). 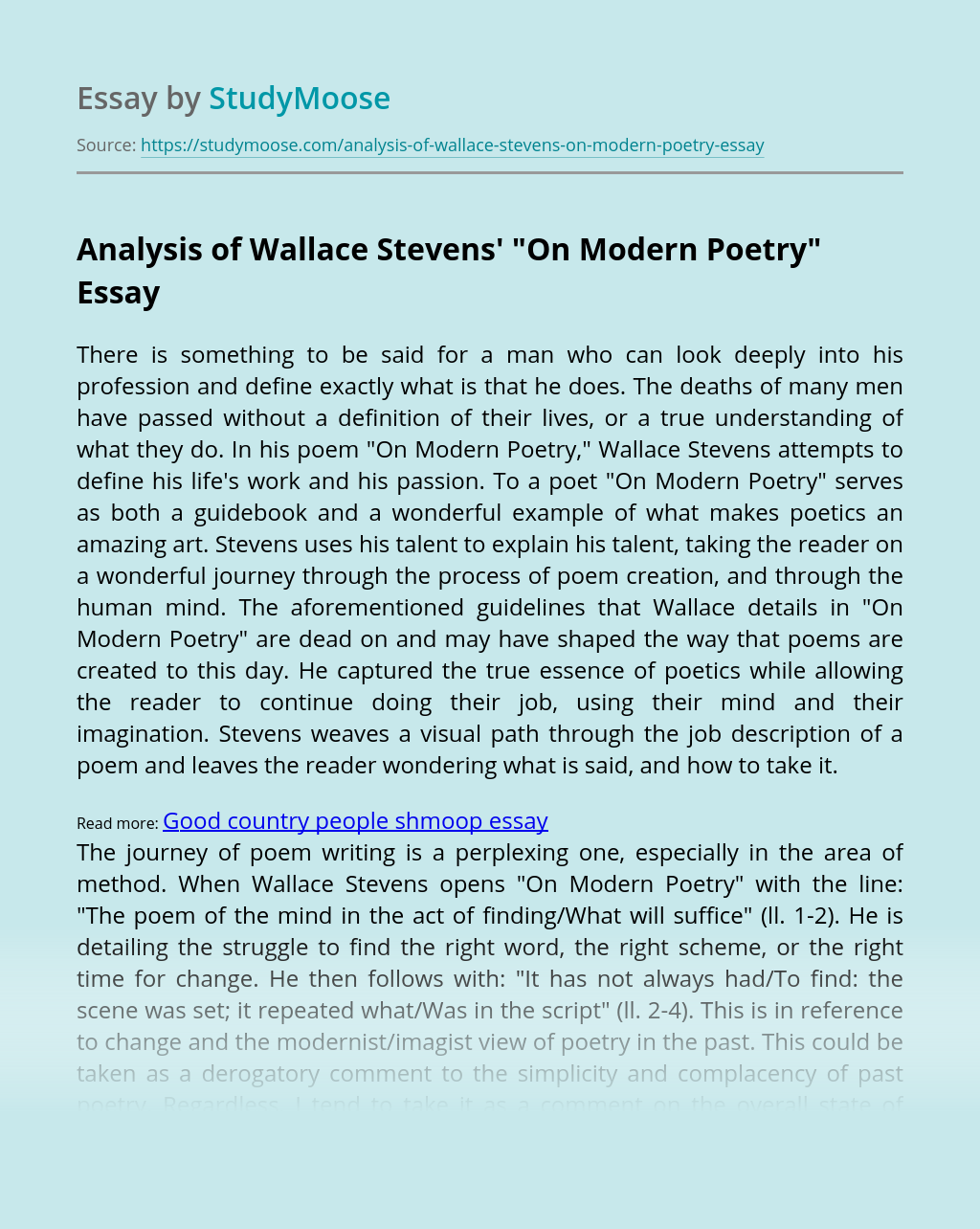