Analysis of Transcript Between Piers Morgan and Cheryl Cole

The interview I have chosen to analyse is a television interview by Piers Morgan with Cheryl Cole. It took place in a studio in front of a live audience. The interview is to gain knowledge over Cheryl’s personal life, and Piers obviously has vivid background knowledge of her life along with some pre-prepared questions to ask. The main topic is a contestant who was in Cheryl’s group during the famous show ‘The X-Factor’ and we can tell this as Piers refers to her directly as the proper noun, ‘Gamu.

Don’t waste time
Get a verified expert to help you with Analysis of Transcript Between Piers Morgan and Cheryl Cole
Hire verified expert
$35.80 for a 2-page paper

’ As mentioned before, Piers had some questions ready to ask, but Cheryl’s responses are all spontaneous, which we can tell by her constant pauses which is a non-fluency feature and so indicates it’s unscripted. The relationship between the speakers is fairly informal and personal as colloquialisms such as ‘readin’ are used. They do not address each other, they both jump straight into the conversation, Piers starting with ‘what are the most hurtful things you’ve had to read about yourself?’ This is an open question and shows they are both fairly familiar with each other as they avoid phatic talk and both get straight to the point.

Cheryl tends to talk for a lot longer than Piers, which is what can be expected as the purpose is to gain knowledge of Cheryl’s personal life. Cheryl gets interrupted often, which is typical of interviews as Piers is trying to stay on topic.

She says ‘that’s what I mean is that/’ before being interrupted by Piers who finishes her sentence with ‘She was judged purely on her singing ability…’ which is a leading question and is almost as if Piers is trying to force Cheryl to respond a certain way, however he does it by being fairly polite, hinting that they have known each other for quite some time.

Because this extract is from the middle of the interview, it does not show us the opening or greeting used. Cheryl uses a lot more colloquialisms than Piers, and also speaks using her Geordie accent. She uses elision such as ‘d’you know I’m not like that’ and ‘it’s one o those things.’ These both underline that she has a different dialect to Piers as he uses hardly any slang in his speech. There are several overlaps in speech turns such as when Piers says ‘Gamu the X-Factor contes[tant],’ which is a noun phrase, used in case any member of the audience are unaware of who Gamu is. Cheryl moves on to say ‘[Yeah].’ When these do occur, they are usually as a form of support, and not out of an intentional challenge. Cheryl uses many long pauses when talking about the sensitive subject of the X-Factor contestant, Gamu. Ashe says ‘week on week out (2) an that’s……I’m with them (2) you make decisions and (2)’ She uses three pauses in that short space of time which shows that the subject she is talking about is making her feel slightly uncomfortable. Cheryl stresses her words a lot when saying ‘an I trust that decision and I believe in me decision’ The use of these modal verbs and the stress that she puts on them show that she is not only trying to convince Piers and the audience that she is right, but she is also trying to convince herself. This is very interesting to see considering the fact that Cheryl is trying to defend a decision she made which received a lot of backlash from the public. When Piers continues to talk about the legal issues relating to Gamu such as her deportation, Cheryl’s responses become much more short and blunt. He asks ‘were you made aware at any stage of any of the deportation issues?’ and she responds ‘absolutely not.’ The interjection of the adverb ‘absolutely’ shows that she is entirely positive that she was not aware, and ensures she lets Piers and the audience know this. Cheryl repeats herself a lot, for example where she says ‘Nobody knew at that stage I don’t think….. (1) nobody knew at that stage,’ this shows that she is unsure exactly of what she is going to say and makes her appear uncomfortable and defensive. Cheryl then gives a false start where she says ‘I just (.) I just ca it’s just ridic I can’t’ Once again, this shows how genuinely upset she is by this topic of conversation, and by this point I believe that she wants the topic to change.

Further on, Piers asks the question ‘She was judged purely on her singing ability as far as you’re concerned?’ Piers puts stress on the adverb ‘purely’ almost to remind Cheryl that she should be truthful. Cheryl responds with a very lengthy response, which could be to justify her decision by distracting him. The last question Piers asks Cheryl is asked almost as if to make her feel sympathy towards Gamu. He underlines all Cheryl’s achievements such as ‘you got lucky and won and your career went into the stratosphere’ and then tries to her make her see things from Gamu’s point of view by saying ‘that(.) desperation that people feel when they get to that stage cos you were there(.)’ He then asks Cheryl to give an answer as to ‘what would you say to her now to try and make her feel better than she probably is.’ I think Piers does this to try and reason with Cheryl. He wants her to give a response which will allow the public to see that she is as upset about this as Gamu is. This shows that Piers thinks quite highly of Cheryl, which then explains why he allows her to change the subject and avoid questions at her own free will, which is not typical of interviews at all. Cheryl’s response to this question is most definitely used as a form of defence, and for her to justify why she made the decisions she has. She says ‘I didn’t judge her or make that decision based on the information I know now’ The stress on the word ‘judge’ shows how passionate Cheryl feels about this, and how determined she is to get her point across. She then moves on to address all previous X-Factor contestants by saying ‘I would say to all the people that didn’t make it through any further to just keep trying and try again and (1) don’t let go of your dreams’ This proves that she is trying to make herself come across as a better person towards the public as well as Gamu, and once again justifies her decisions. Cheryl then refers back to Gamu by saying ‘I can’t make that a personal (.) opinion towards Gamu cos of her situation now because that wasn’t at all in my mind when I made the choice I made’ This shows the public that Cheryl was highly upset by her decision, and the stress on ‘at all’ could be seen as a persuasive technique to get the public on her side. Overall I think Piers is a great interviewer. He shows particularly in this interview that he has a high opinion of Cheryl, but at the same time he still attempts to get all the information he needs whilst doing it. He avoids upsetting her where he can, and allows her to change the agenda when she’s feeling uncomfortable, which is highly un-common in celebrity interviews. The section I have used is from the middle of the interview, so it is hard to establish how it was opened or closed. However by the overall tone of the interview, it is clear to see that both participants are quite friendly with each other, and have a mutual respect.

Analysis of Transcript Between Piers Morgan and Cheryl Cole. (2016, Mar 29). Retrieved from http://studymoose.com/analysis-of-transcript-between-piers-morgan-and-cheryl-cole-essay 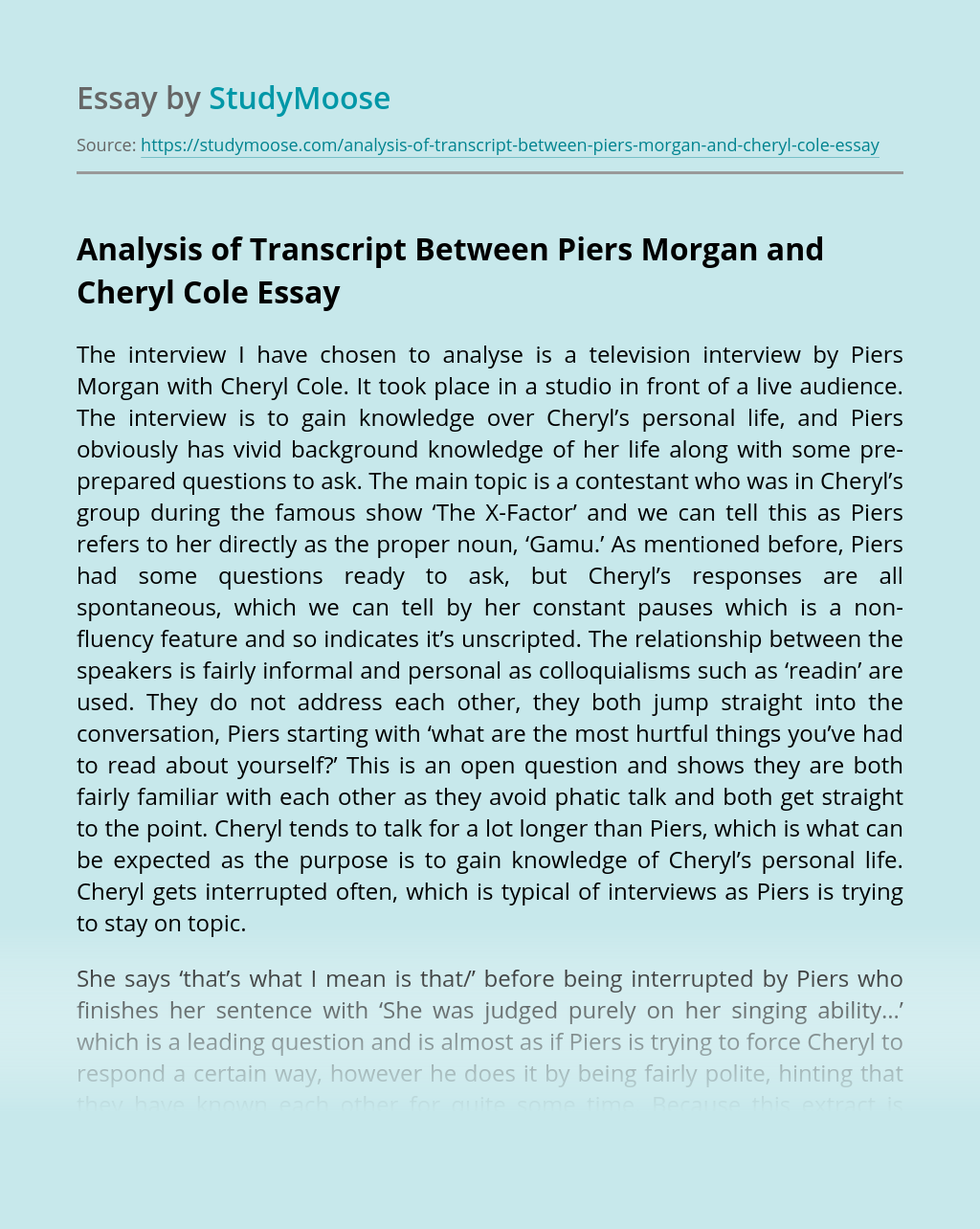 Don’t waste time
Get a verified expert to help you with Analysis of Transcript Between Piers Morgan and Cheryl Cole
Hire verified expert
$35.80 for a 2-page paper
Stay Safe, Stay Original