Analysis of the Theme in TC Boyle’s Greasy Lake

The theme in T.C. Boyle’s “Greasy Lake” is demonstrated when the narrator and his friends learn a potentially deadly lesson through a series of accidents, caused as a result of their reckless pursuit to be bad. The nature of life reveals to them that striving to be bad in order to be viewed as hip or cool can often result in dark accidents, with catastrophic consequences. In the beginning of the story, three adolescent boys believe themselves to be “dangerous characters” (Boyle, 131) and that “it was good to be bad, when you cultivated decadence like a taste” (130).

Turn in your highest-quality paper
Get a qualified writer to help you with
“ Analysis of the Theme in TC Boyle’s Greasy Lake ”
Get high-quality paper
NEW! AI matching with writer

However, they learn painful lessons during summer vacation that reveal there will be a price to pay in trying to appear bad. They will be forced to question whether or not they are as bad as they think. The potential that there is someone worse than you needs to always be appreciated. Questions of limits and how far they must be willing to go to survive, regardless of the consequences, is a test that will be given.

Being teenagers they romanticize about being bad. Staggering around town they are seen wearing torn-up leather jackets, drinking alcohol, doing drugs and striking poses to show that they do not care about anyone or anything. The narrator himself believes his friends to be dangerous because they were quick, slick, and could do something like drive “a Ford with lousy shocks over a rutted and gutted blacktop road at eighty-five while rolling a joint as compact as a Tootsie Roll Pop stick”(131).

It was the third night of summer vacation when the narrator and his two friends, Digby and Jeff, wanted to show their town that they are cool. “Looking for something they never found” (131) the previous two nights, left the boys searching for action, excitement, and itching to cause trouble. It was natural for them to indulge in their desires as they howled at the stars, cranked the music to full blast, and “threw rotten eggs at hitchhikers and mail boxes” (131), the boys headed the old station wagon toward Greasy Lake to raise havoc.

In their minds, having fun was synonymous with being bad. Unfortunately, they would soon learn that nature was about to introduce a twist that would shatter the narrator’s romantic notion of being a bad character forever. Greasy Lake is where the boys, in keeping with their bad character appearance, acted impulsively. With little regard of consequences, they decide to play a joke; surprising the wrong person in the wrong car, “a bad greasy character” (132) who may have thought those three boys were looking for a fight or perhaps intending to do far worse things. Compounded with the fact that his fling with a young girl was interrupted, the greasy character decided not to ask questions, but to take violent action and attack the boys. In making a stupid mistake due to harmless mischief, they soon realized that revealing the mistaken identity would not change the consequences. However, it happened and he was now in a situation he could not control, filled with very real consequences he was not prepared for.

It could be called fate, karma or even nature but, whatever romantic idea he held of being bad had no way of preparing him to deal with the pain and broken tooth he suffered as a result of getting kicked in the face. After he knocks out the greasy character with a tire iron, the narrator, very aware of what he has done, thinks that he may have accidentally murdered him. Pangs of fear engulf him, not just because what he has done is truly bad, but because of what will happen to him as a result of his actions. Once again instead of making a better choice of searching for his key and getting them away from Greasy Lake as fast as he can, he acts along with the boys in trying to be even more dangerous and bad, attempting the rape of the greasy character’s young girl. Intervention came by way of two frat boys who happen along at the exact same moment forcing the boys into running and hiding. No real means of escape was available so they ran out of sight into the bog around the lake shore.

Had he looked for the key after hitting the greasy character, instead of trying to prove his badness again, they would be long gone by now. Instead they were all stranded wading in nasty water not knowing when they would be able to escape. Being beat up, obtaining a broken tooth, almost raping a girl, wading in the muck of a polluted lake with a dead body, and having their vehicle destroyed were the consequences these young boys experienced all because they wanted to appear to be bad. At the end of the story it becomes obvious that the boys have finally learned their lesson due to these horrible consequences. This is evidenced in the refusal to party with the “stoned” (136) girls who were offering themselves willingly, had these adolescents still been seeking to be bad they would have accepted.

Instead, he states that “he wanted to get out of the car and retch” (136) and go home to his parents’ house and crawl into bed. When the girls said “Hey you guys look like some really bad characters” (136) instead of being gleefully happy that they had finally accomplished their mission, all three of the boys “stared straight ahead, rigid as catatonics” (136). Unfortunately, the best and most memorable lessons we learn are usually the hardest ones we experience. Implications from the narrator are that they found out the hard way that being bad is bad, and the horrible consequences they experience turn out to be far greater than the benefits.

Analysis of the Theme in TC Boyle’s Greasy Lake. (2017, Jan 08). Retrieved from https://studymoose.com/analysis-of-the-theme-in-tc-boyles-greasy-lake-essay 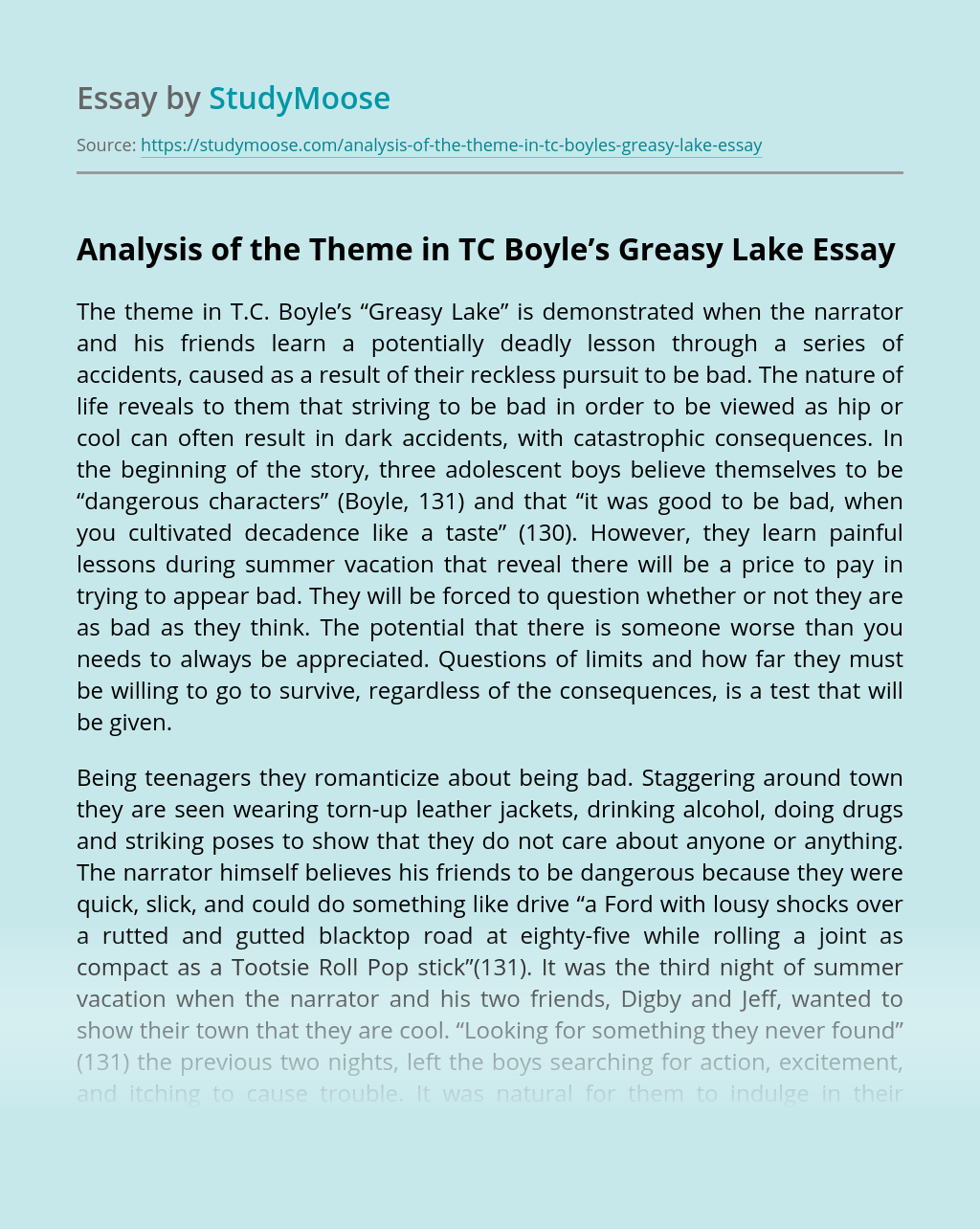 Turn in your highest-quality paper
Get a qualified writer to help you with
“ Analysis of the Theme in TC Boyle’s Greasy Lake ”
Get high-quality paper
Helping students since 2015
Stay Safe, Stay Original