In my paper I am going to analyze one of the Sam Shepards play. Its name sounds depressive but it completely fulfils the main idea of the play – Buried Child. From the information I read about the author I deduced that he wrote it on the basis of his own personal experience in his childhood. Sam Shepard grew up on the farm in California and was a member of a broken family because his father was an alcoholic. The play was firstly produced in the year 1978.

Don't use plagiarized sources. Get your custom essay on
“ Analysis of the Sam Shepard’s Play Buried Child ”
Get custom paper
NEW! smart matching with writer

From this and from the story itself implies my presumption that the whole story is set in the 1970’s when the USA was in a hard economic situation caused by the war in Vietnam. To be more concrete it is set in Illinois on the farm where nothing grow anymore. I think that only through the description of the characters you would be able to see the main points of why I titled my work American Nightmare.

Dodge is supposed to be the head of the family but he is broken by things that happened in the past.

He is an old dying man and he is paranoiac but he has a reason to be. He is considered poor man whom doesn’t like even his family. He failed in building his American Dream because his family is no more working and the farm he built up many years ago is left without any interest. He left everything after the biggest secret of the family happened.

He killed his wife’s son but not without reason, as his son Tilden in the play says, “He said he had his reasons . . . He’s the only one who knows where it’s buried.” (Shepard 104) The reasons I found out in the text were that she, Halie, had the baby with another man. There are some hints which led me to think that the man might have been Tilden, her own son. Then it would have been much worse because the act of incest is totally against the modern society.

We don’t know the background, how everything happened, if Halie was raped by her son or he was seduced by his mother. Nevertheless killing the baby was no solution because the family fell apart anyway. Halie, the only women in the family, is the one who tries to have a normal life but it is full of hypocrisy and fear of that other will find out the family secret. Interesting is that even though Dodge killed her son she lives and communicates with him like nothing happened. Even though it is obvious that she is having an affair with a Protestant minister Father Dewis. This is also an irony because he should be a symbol of temperate life. Instead of that he drinks alcohol and seduces women. In the play I feel that the fear of not being relieved have everyone in the family. They made a deal that they won’t talk about the past and they are hoping that they will simply forget. Halie’s only light in the life was her son Ansel who was murdered in a motel room after marrying a Catolic Italian girl. Halie hated that girl from the beginning and she argued that she was a “Devil incarnate” (Shepard 74).

Ansel had no time to go bad so he looks like an ideal son in Halies eyes. She is so obsessed with him that she wants to unveil his statue. She remembers him as a son who played basketball and was a soldier, a hero, an All-American. In her monologues then we can find the importance of doing some sport in youth and being a Protestant. The character of Tilden is very interesting and mysterious for me. He is the oldest son and he was supposed to take care of the family, the parents, which is matter of fact in the American Dream (children should take care of their parents). Nevertheless he got into trouble somewhere in New Mexico, maybe he was kept in prison, because he returned back to his parents’ house after 20 years completely broken, especially mentally.

Nothing I dreamed of was better than driving. (Shepard 102) Freedom is defined in American Ways as “the desire and the right of all individuals to control their own destiny without outside interference from the government” (Datesman, Crandall, Kearny 33) and exactly this was in Tilden’s life broken. He was in prison and he is under the control of his parents now. Also his brother Bradley is not independent due to the accident where he lost his leg. With the character of Bradley I connected one question: Why he could live and the other baby not? Because from the story it is obvious that Bradley also isn’t Dodges son. The only solution I have is that the murdered baby really had to be a birth from incest.

The only light in the story, at least at the beginning, is Shelly. She came to visit his boyfriends grandparents house and she had the typical American, that means ideal, image of how it would be like: “I thought it was going to be turkey dinners and apple pie and all that kinda stuff.” (Shepard 91) Obviously she was confused from all these people in the house and she was the one who forced them to talk about things. Nevertheless it was to much for her and she left the house and her boyfriend Vince. To be honest there were some symbols in the play I didn’t understand. For example the act of symbolic Dodges burying on the end of the two acts. The only thing that came up my mind was that his sons blame him from everything and they think that killing the baby was the main reason why the family fall apart.

In my opinion that’s not true because each member of that family has his own guilt. Another mystery for me is the character of Vince, Tilden’s son. I didn’t get the message of his character especially at the end of the play where, after Dodge is dead, he puts on Dodges cap and lay down on the couch, totally out of his mind. Maybe he was so shocked and ashamed of the family secret that he just adopted to the fact and started to live the same life as his grandfather lived. The play perfectly describes the opposite of the American Dream which is the life goal of most Americans and it also shows what a big difference is “between idealism and reality.” (Datesman, Crandall, Kearny 34) 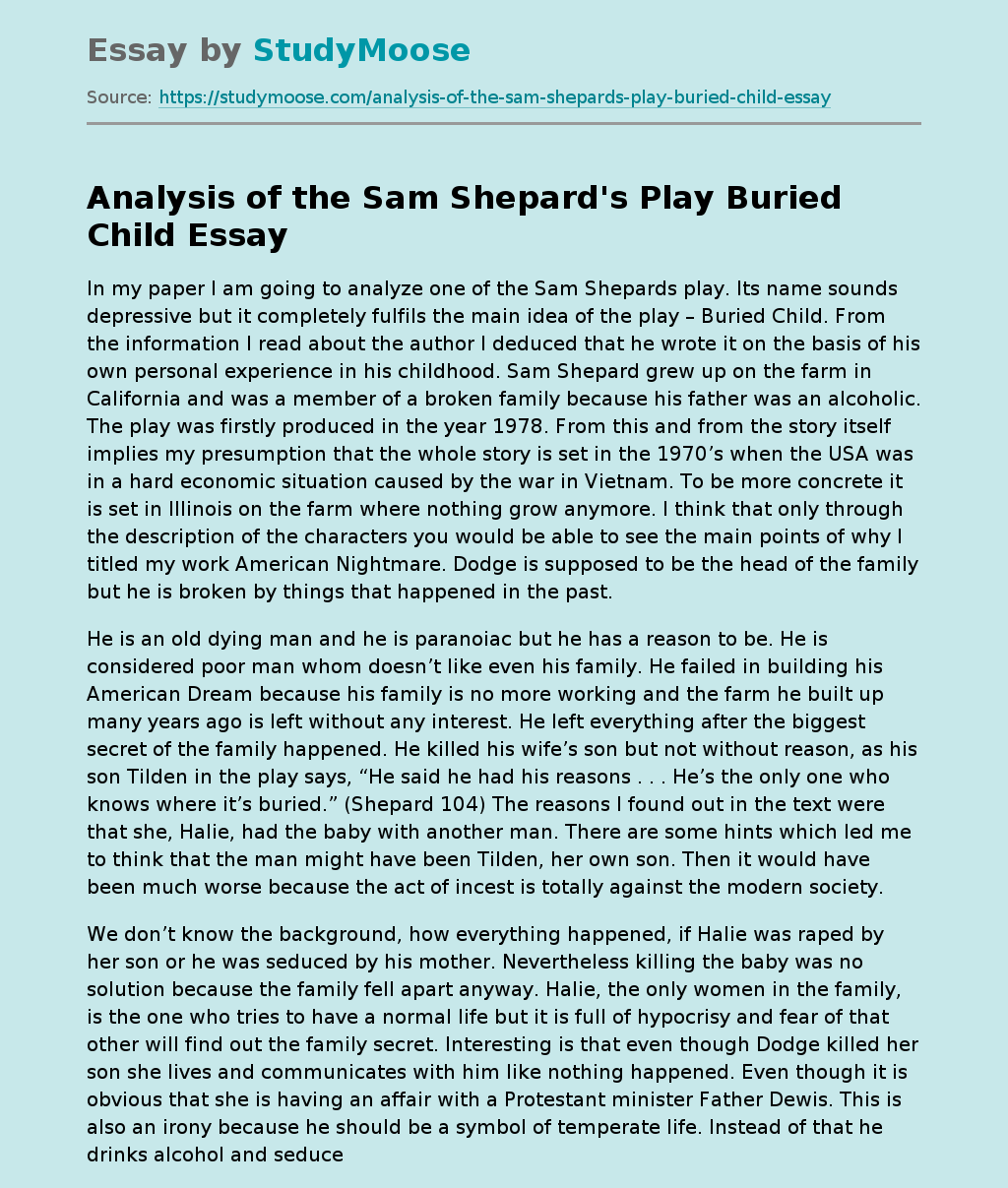