Analysis of the poem A strange Meeting Essay

In the elegy “strange Meeting “, Owen brings the horrors of wars and their devastating effect on those involved, he emphasizes their part in hindering the world from progress . War and death are presented in this poem through the story of two dead soldiers ,who fought on opposite sides , and who meet again in Hell . They speak of their shared hopefulness of the “undone years ” . Owen’s manipulation of words and his use of artistic devices in the poem takes the reader to a vivid awareness of the real dreadfulness of battles and death.

Don't use plagiarized sources.
Get Your Custom Essay on Analysis of the poem A strange Meeting Just from $13,9/Page

The speaker in the poem ,who is a soldier, starts the poem by saying that he seemed to ” escape” the battle to somewhere else , a place he discovers later to be Hell . The mere use of the word ” escape ” implies that the speaker was trapped in war before he escapes to Hell which is , when compared to battle, a relief.

Owen says that common words associated with wars like chivalry , courage and gallantry do not describe wars, not really, instead war is pain , sorrow and loss .

He emphasizes on the destructiveness of wars to those involved . He says ” yet also there encumbered sleepers groaned ” , so they are ” encumbered ” physically with their uniforms and sacks and emotionally with too much sadness and sorrow brought to them by war . Those sleepers are ” too fast in thought or death ” to be stirred . One of those sleepers ” sprang up ” from death and smiles , although he smiles but still it is a smile of death . That man recognizes the speaker for he, the speaker, is the one who killed him as we know later in the poem . The poet describes this other man’s face as ” grained ” with ” a thousand pains “, pains from his previous life and past experiences in battle . Now they are in Hell , a place of anguish and despair , a place where shouts of pain and torment is expected , but oh no , not in this poem .

Hell is a quit place where there is silence ” yet no blood reached there from the upper ground ” ” and no guns thumped , or down the flues made moan ” . So Own draws a picture of silence in Hell and contrasts this picture with battle where noise, blood and moans are everywhere . The speaker says about Hell that ” here is no cause to mourn ” no more grief or sadness . The stranger agrees with him ” None ” as if they are both relieved that it finally Al Neghaimshi 2 ended , finally they will rest . ” Save the undone years , the hopelessness ” This is their only regret . They shared so many in the past , the two of them , similar lives , experiences and similar horrors and pains that they could be called “friends ” in spite of the fact that they are actually strangers . “Strange Friend ” as paradoxical as it seems but still true , ” Whatever hope is yours , was my life also ” .

Owen argues that wars ” trek” the nations from progress and he calls it ” retreating world ” . The poet says ” when much blood had clogged their chariot-wheels ” he would go and ” wash them ” . Owen takes into his hands as a poet ” to warn ” as he said himself once , ” Even with truths that lies too deep ” . He says he will do it ” not through wounds ; not on the cess of war ” , so it is not through innocent people , not through wars that destroys the lives of many . ” Forehead of men have bled where no wounds were ” that’s a clear indication to the myth of Christ which says that before he was crucified his body sweat blood , He was the one who paid for the sins of the humankind and so are those men paying their lives in wars whom foreheads ” bled where no wounds were ” .

” I am the enemy you killed , my friend ” a beautiful line towards the end of the poem . Although we stand in life different and enemies , but we shared the same experience and will share the same destiny . He closes the poem by saying ” let us sleep now ..” let us finally rest and forget the horrors and pains . So ironic of Owen to let his protagonist finally rest in ” Hell” . Aren’t people who fight for their countries are supposed to be martyrs and go to Heaven ? It is Owen’s way of doubting the cause which wars stand for , the cause after all is false . Owen by letting his two protagonist rest in Hell , he also conveys the message that Mankind must seek reconciliation , stop this bloodshed , they must embrace pity and love for each other . Owen writes this beautiful elegy that talks about war and death , but what is most ironical is that he himself dies in war .

Analysis of the poem A strange Meeting. (2017, Aug 25). Retrieved from https://studymoose.com/analysis-of-the-poem-a-strange-meeting-essay 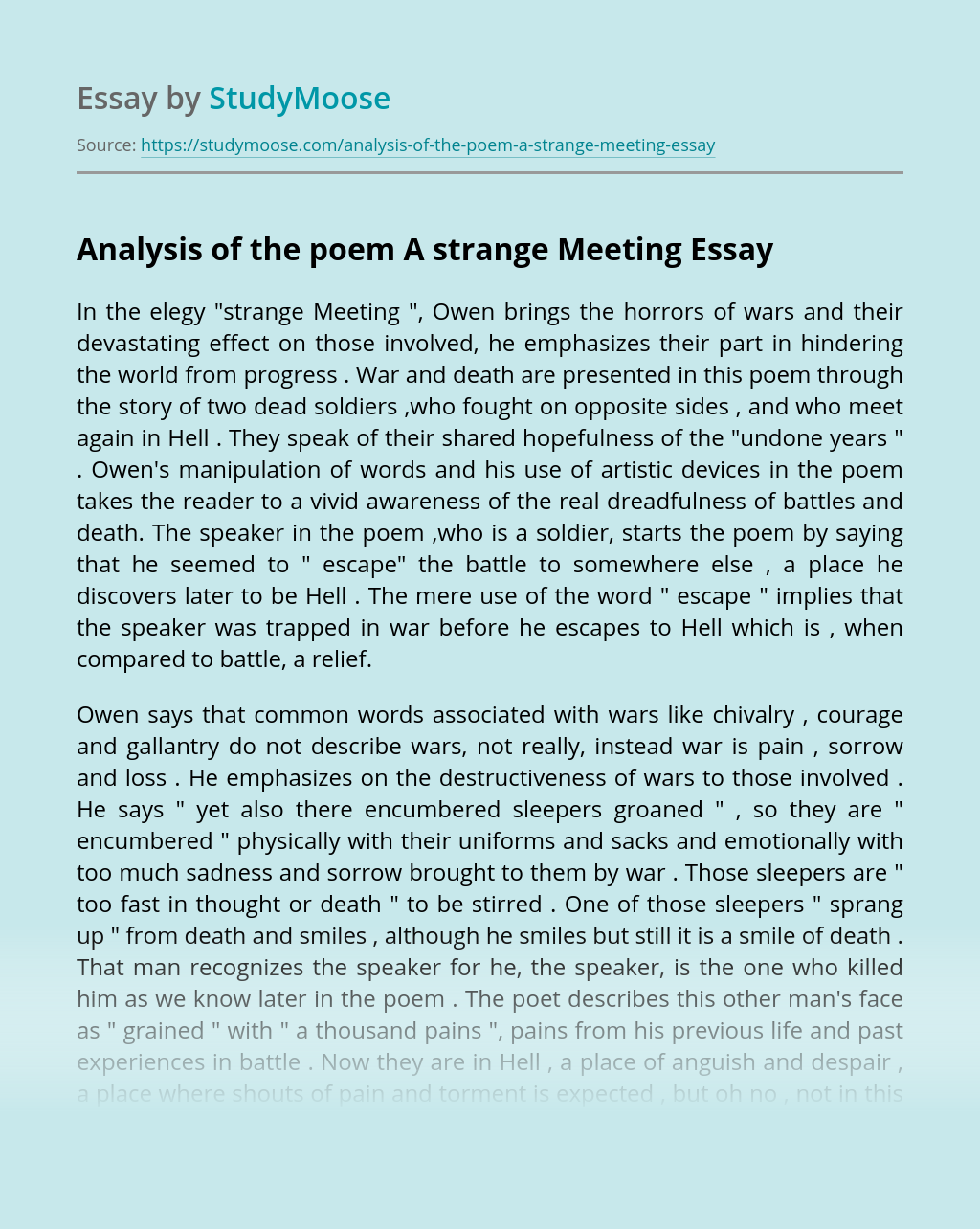 Music has become one of the most effective and influential tools in various cultures all over the world. For several years, it has evolved into different kinds of genre such as opera music, hip hop, rap, R&B, grunge rock, metal rock, death rock, emo rock, alternative music and techno music. Aside from these types of... VIEW ESSAY

QuestionToday, steel production is an index of national prosperity and the basis of mass production in many other industries such as shipbuilding, automobiles, construction, machinery, tools, as well as industrial and domestic equipment. (Masaitis, 2011) According to Deputy International Trade and Industry Minister Datuk Chua Tee Yong, the steel industry is still important to Malaysia... VIEW ESSAY

In May 1994, ABS-CBN” signed an Arrangement with the Mel and Jay Management and Development Corporation. ABS-CBN was represented by its business officers while MJMDC was represented by SONZA, as President and General Manager, and Carmela Tiangco, as EVP and Treasurer. Referred to in the Arrangement as “REPRESENTATIVE,” MJMDC concurred to offer SONZA’s services specifically... VIEW ESSAY

A significantly large aspect of Plato’s dialogue entitled Republic is the discussion of the concept of justice. On a preliminary note, the significance of such a concept makes itself manifest in our deepest questions concerning the many aspects of the political order and political life. In the Republic, Socrates’ interlocutors Glaucon and Adeimantus, challenge the... VIEW ESSAY

View sample
The Role and Scope of Sociology

The Role and Scope of Sociology is concerned about the social facts in the family, community, economy, religion, language, and so on and how these elements impact our specific lives. According to the New Oxford American Dictionary, sociology is the study of the development, structure, and working of human society. Sociology is essential because it... VIEW ESSAY