Analysis of the novel "Unwind"

In the novel, Unwind, three teenagers embark on a journey full of mischief, excitement and tragedy. The three main characters have their own agenda in the novel. Risa is orphan who is being unwound due to cutbacks in budget. Lev is an thirteen year old tithe who’s main purpose in life was to be unwound once he turned thirteen. Lastly, Connor is fifteen year old trouble maker who is being unwound due to the fact that his parents have grown sick and tired of his negative behavior.

Don't use plagiarized sources. Get your custom essay on
“ Analysis of the novel “Unwind” ”
Get custom paper
NEW! smart matching with writer

They all show that in the end that life is sometimes a fight for survival.

In the beginning Connor runs away from home because he doesn’t want to be unwound. While Connor is running away from the police on the interstate, he pulls Lev out of a car and takes him hostage in order to slow down police. As this happens, Risa’s bus crashes due to Connor’s antics and she escapes the grasp from the people trying to unwind her.

When the three finally get away, Lev is hell bent on getting revenge Connor for kidnapping him. When the three teens hide in a local high school, Lev sneaks away from the pack and tells the local authorities about the runaway unwinds. When the police enter the school and the fire alarm is pulled, Risa & Connor have to make a last second escape from the cops. With the help of a teacher, they find help in a local antique’s shop owner named Sonia.

Sonia helps Risa and Connor, by letting them stay in her store basement where they meet Roland, Mai, and Hayden (other runaway unwinds). Sonia tells them that their stay is only temporary and when their time is up they are shipped different safe houses. Connor & Risa hate Roland, for he is a power hungry bully with nothing to lose. After Christmas, all of the kids who are stationed in the safe houses, are put in airplane crates and shipped to “The Graveyard”. In the graveyard they meet The Admiral who protects unwinds until they turn eighteen, then he lets them go. When things get out of hand, the thousands of kids being stationed in “The Graveyard”, make an attempt to kill The Admiral. All of the teenagers believe that he wants to sell them for their parts. When The Admiral almost dies, Roland, Risa, and Connor fly him to a local hospital where Roland turns them all into the authorities.

At the Harvest Camp, Connor is recognized among the many teenagers as the “The Akron AWOL”. This is the name given to him for his actions on the interstate in Akron, Ohio. While in the Harvest Camp, Connor sees Lev, and is surprisingly overjoyed. Though Connor does not know that Lev is there for his own hidden agenda. When Connor’s day comes to be unwound, it’s a mournful day at the Harvest Camp. Once Connor enters the doors of the Unwind Medical Bay, bombs go off. Suicidal bombers known as clappers blow up the medical bay and Connor comes limping out without an eye and badly wounded. Risa, who was playing in the band on top of the medical bay. To everyone’s surprise, Lev is one of the bombers, but he refused to make himself go off. Instead he runs into the medical bay and helps pull the other’s out including Risa.

When Connor wakes up with only vision in one of his eyes, he figures out that someone has given him a new name. He also notices that the new replacement arm is Roland’s. Risa is paralyzed from the waste down, but is happy to be alive. Lev is in a Juvenile detention center for having traces of nitroglycerin in his blood (relating him to the suicide bombers). In the end, Connor and Risa both go back to “The Graveyard”, where they help other numerous unwinds escape from their death. Due to Lev’s antics at the Harvest Camp, the government changes the unwind ages from 13 through 18, to 13 through 17.

Analysis of the novel "Unwind". (2016, May 08). Retrieved from http://studymoose.com/analysis-of-the-novel-unwind-essay 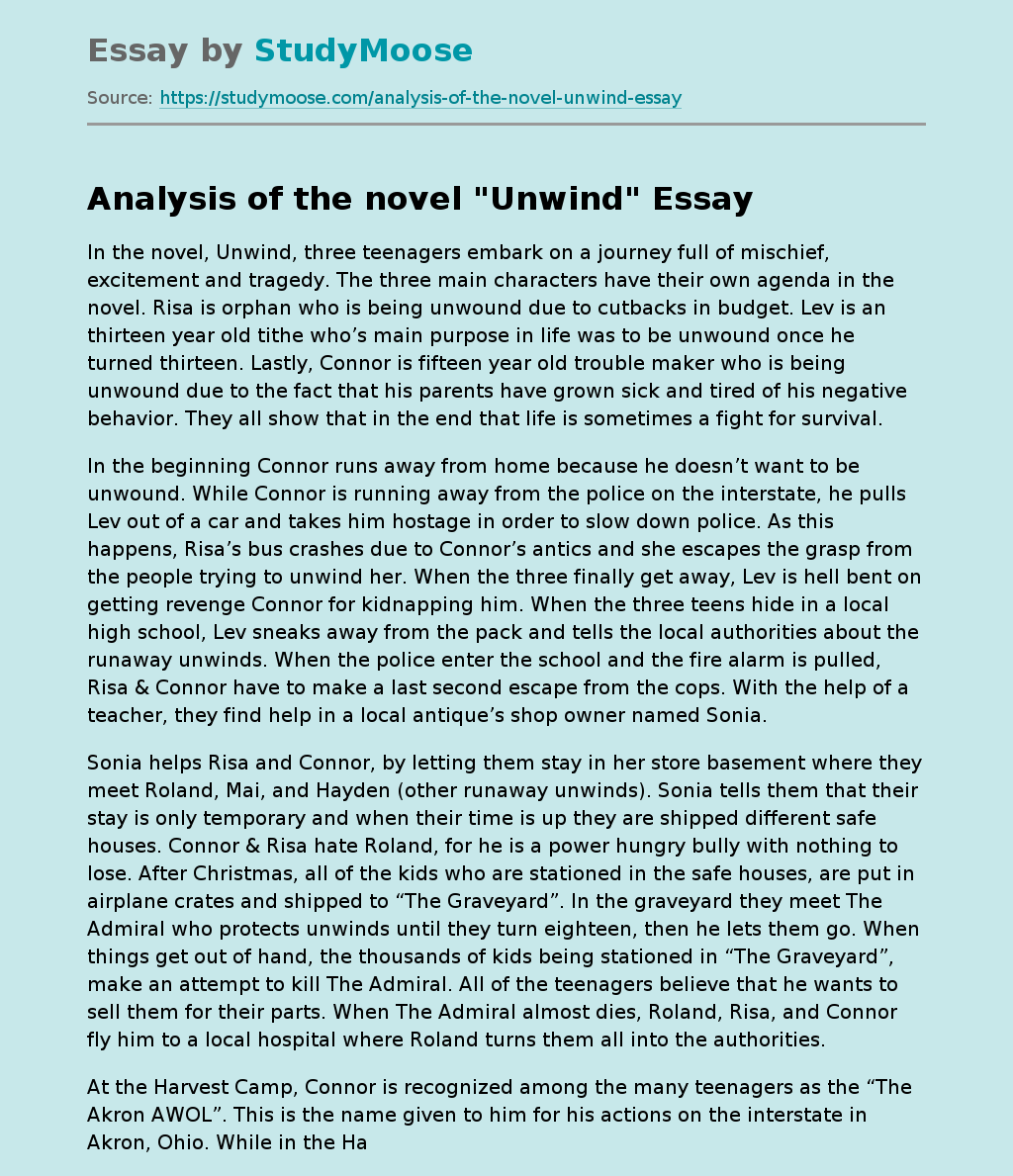