Analysis of Slavery, Racism and Discrimination in Clotel

Clotel is an interesting piece of literary work by William Brown, as it exposes the depraved social conditions of Chattel Slavery and its effect on Marriage relations between slave and slave owner. Interestingly, I recognized the stereotypes that can develop from conditions of race and class in our society. More importantly, we see how race and class present higher priviledges to mulatto slaves (quadroons), than what William coins as the “real negro. ” Undeniably, there is a stereotypical belief in today’s society that light skin or fairer skin people have an esteemed privilege than that of dark skin people.

Don't use plagiarized sources. Get your custom essay on
“ Analysis of Slavery, Racism and Discrimination in Clotel ”
Get custom paper
NEW! smart matching with writer

Although fictional characters, Currer, Clotel, and Althesa are real-life representations of that belief because they were mulattos. One may imply that it is quite stereotypical to say that light skin people have a higher privilege that is not necessarily given to dark skin people, although many believe it to be true as a result of the conditions faced by non-mulatto slaves. However, others may not agree.

Currer and her two daughters Clotel and Althesa are all protagonists in this literary work.

Currer, a bright mulatto was a housekeeper for slaveholder Thomas Jefferson, upon which she beared Clotel and Althesa. Currer being of the higher class of slaves was permitted to hire her time for more than 20 years. Surely Currer wanted nothing more than to raise her daughters to attract attention in efforts that they might marry into their freedom. Compared to ordinary slaves, Currer and her daughters had once lived in luxury due to privileged conditions of being a mulatto slave.

Nevertheless, they were still slaves, and often reminded that they were no different than ordinary slaves.

For example, Clotel was only 16 when she was purchased by Horatio Green, son of a wealthy gentleman of Richmond whom promised to make her “mistress of her own dwelling. ” She lived in luxury for a while, and even beared a child named Mary with Horatio. The time came that Horatio began to be involved with politics, and his success with politics being of greater importance proved his union with Clotel would soon end. Horatio took interest in the daughter of a wealthy man with whom he found a connect to success in politics. Horatio later married her, leaving Clotel to be sold to a slaveholder at the demand of his mistress.

It is here that we discover that even the mulatto woman is not as esteemed with privilege as she was once perceived to possess. She is still a slave , born of that blood. She may have lived in luxury for a while, but it was very predictable that she would be sold again to the highest bidder, and for the latter purpose. What is so significant about not only Clotel’s character, but also for her mother’s and sister’s character is that they are symbolic of how mulatto slaves were used as an even bigger commodity during slavery.

They were put on a pedestal to feel as though they had more privilege, only to discover that they really did not. Even more importantly, mulatto slaves knew the significance of having been mixed-bred, and how it could be used in attempt to free themselves, just as Currer had planned for her daughters from the very beginning. Mostly, the mulattos or quadroons were the house slaves, and occupied the best situation a slave could occupy. Most of the mistresses of the slave owners in the South sought to make the lives of quadroons intolerable, because they viewed them as rivals.

For this reason, Mrs. Green had demanded that Clotel be sold out of the state. How soundly ironic that mulattos could be stuck at the center of the depraved social condition of marriage relations between slave and slave owner? And being of the higher class of slaves still be subject to the will of his master. Were they really of a higher class, or were they no better than an ordinary slave whom labored outside the master’s house? Some people have their own prejudices toward blacks in general even in today’s society.

It is safe to say that some whites even still view blacks as slaves. No matter how fair or light the shade of their skin is, it still does not dismiss the fact that they are born of African descent. As William stated in his work, there was a depraved social condition that placed the slave under total control of his master from the very beginning no matter how light or fair their skin was. Therefore, the stereotypical belief that mulattos or light-skin people have an esteemed privilege over dark-skinned people is without a doubt, debateable.

Analysis of Slavery, Racism and Discrimination in Clotel. (2016, Jul 28). Retrieved from http://studymoose.com/analysis-of-slavery-racism-and-discrimination-in-clotel-essay 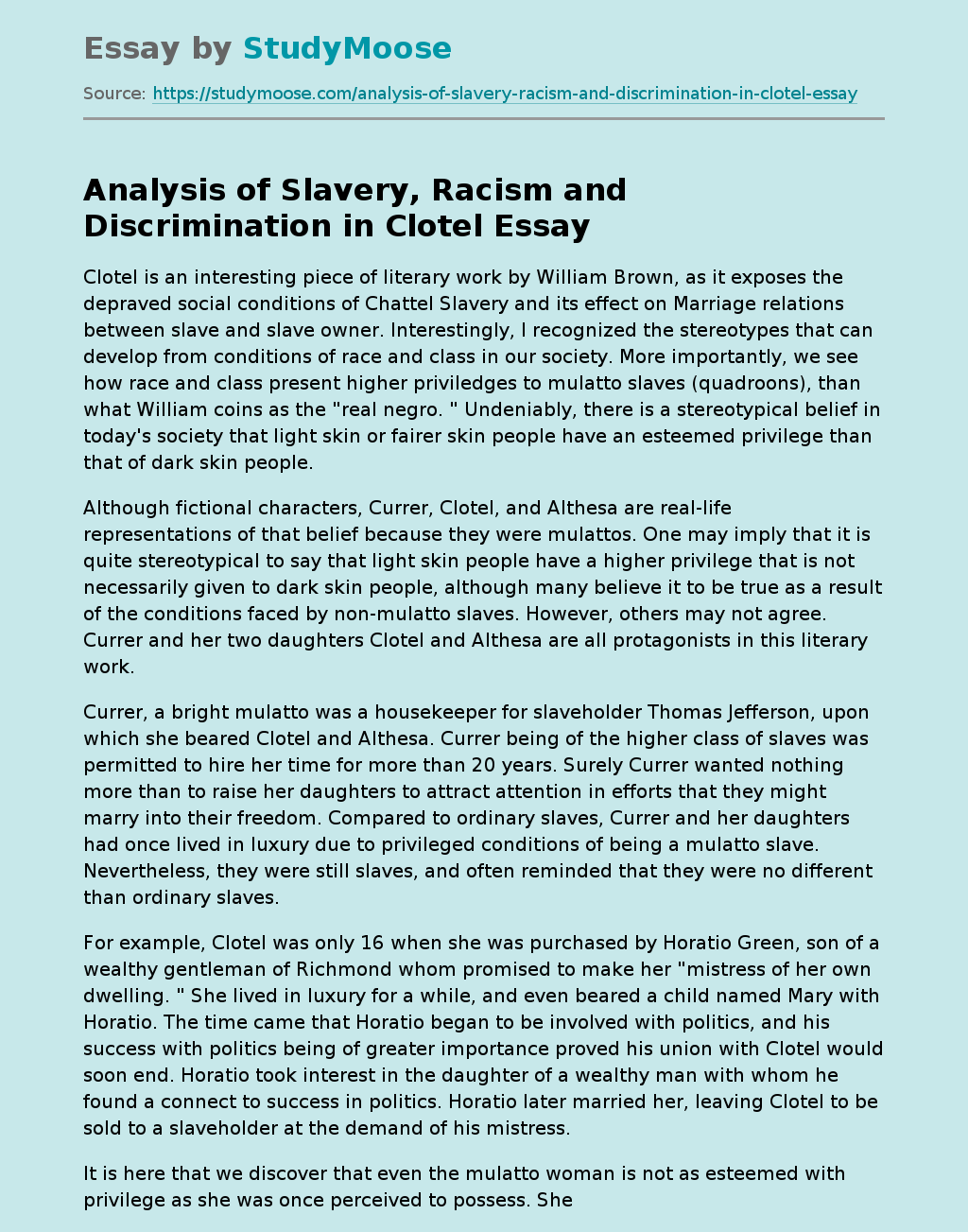