Analysis of Prejudice and Discrimination in Films

“Why does he hate me so much? Is it me personally or just what I am? ” I have chosen to explore the idea of prejudice (judgments of a person based on race, gender, social class, and religion or group associations. ) These themes are evident in the short film ‘Chinese Whispers’ directed by Neil Paddington and Stuart McKenzie, and in three written texts ‘Noughts and Crosses’ by Malorie Blackman, ‘Patches Hide No Scars’ by Haree Williams and ‘On the Sidewalk Bleeding’ by Evan Hunter.

Don't use plagiarized sources. Get your custom essay on
“ Analysis of Prejudice and Discrimination in Films ”
Get custom paper
NEW! smart matching with writer

“I used to comfort myself with the belief that it was only certain individuals and their peculiar notions that spoilt things for the rest of us. But how many individuals does it take before it’s not the individuals who are prejudiced but society itself? ”

‘Noughts and Crosses’ is a powerfully written, fictional novel about two teenagers Callum (a nought) and Sephy (a cross), who are stuck in a racist dystopia separated only by skin colour. In Malorie Blackman’s imaginative novel the characters are either a “black dagger bitch” or a “white blanker bastard.

” Callum and Sephy are surrounded by a hierarchy, in which Noughts are considered second-class citizens and forbidden to be together.

This disturbed society shows a racial prejudice in which interracial relationships are not allowed and there is favoritism towards the Crosses. “You’re a Nought and I’m a Cross and there’s nowhere for us to be, nowhere for us to go where we’d be left in peace… That’s why I started crying.

That’s why I couldn’t stop. For all the things we might’ve had and all the things we’re never going to have. ” This example shows the desperation of Sephy as she realizes that because of the prejudices of her society she will never be allowed to be with Callum.

This film relates back to events in the past in ‘our’ world with issues such as discrimination and the mistreatment of people of a particular race or religion. An example of this is the class-system in America. For many years African-Americans, (like Noughts), were judged by their skin colour and treated as inferior beings. Author Malorie Blackman used specific examples from events in the Black Civil Rights movement in the novel to add impact to her novel. An example used is the pioneering achievements of Robert Peary.

Examples like these show that Noughts’ achievements are undervalued or ignored because they have white skin. I strongly believe it is important for children of today to be educated on issues like these to remove all racisim. ‘The Universal Declaration of Human Rights’ states “all human beings are born free and equal in dignity and rights…. Everyone is entitled to all the rights and freedoms set forth in this Declaration, without distinction of any kind, such as race, colour, sex, language, religion, political or other opinion, national or social origin, property, birth or other status.

This novel has made me believe in the importance of educating young people on events and issues, like genocide (eg the Rwandan Genocide of 1994, only 18 years ago, where an estimated 7 Tutsi citizens were brutally murdered every minute for 100 days! ) and racism, in order to prevent the future from becoming a place like in ‘Noughts and Crosses’. How are we to learn from the mistakes of mankind if we are never educated on them? “Dreams of living in a world with no more discrimination, no more prejudice, a fair police force, an equal justice system, equality of education, equality of life, a level playing field… ” His name is Andy. ”

This gang related short story “On the Sidewalk Bleeding” relates to the theme of prejudice by exploring the idea of lost identity through group association. At the exposition of this story, Andy (a member of the ‘Royal’ gang) is stabbed by a rival gang (‘The Guardians’) during a ‘rumble’. The plot then follows Andy’s thought path as he slowly bleeds to death. “The knife had not been plunged in hatred of Andy. The knife hated only the purple jacket. The jacket was as stupid meaningless thing that was robbing him of his life. ” Andy wears a purple silk shirt, a symbol of his membership with the ‘Royals’.

In his dying moments Andy comes to the realization that people don’t see him as Andy, a human being, but a member of the ‘Royals’. At the climax of the short story Andy uses his last strength to take off the jacket so that he can be Andy again. “I want to Andy. ” Sadly, just after his death, Andy’s girlfriend Laura, finds Andy’s dead body and races off to find a police officer. The police officer sees the purple ‘Royal’ jacket next to Andy’s body, the officer then proceeds to say “A Royal, huh. ” This shows that Andy’s efforts to remove himself from the gang have failed as the police officer judges him by the sight of the jacket.

The police officer associates Andy as a part of the gang the ‘Royals’ and doesn’t see him as Andy, a sixteen year old boy. This short story by Evan Hunter has shown me how easily a person’s identity can be lost through association and how people can perceive you as a member of a group not an individual because of an item of clothing. “The world didn’t know he was Andy. ” ‘Chinese Whispers’ directed by Stuart McKenzie and Neil Paddington also relates to racial prejudice or judgments based on race before actually meeting a person.

The short film “Chinese Whispers” is based around Wellington teenager Vincent Chan’s struggle to fit in. Vincent confused by the two diverse aspects of his culture. At the beginning of the film Vincent lives in fear of encounters with xenophobic bogans who dislike and harass Vincent because he is Chinese. “Vincent is ashamed to be Chinese. ” Vincent feels pressure to conform to the ‘social norm’ of his age group. He turns his back on his father’s cultural ways and instead joins Swan’s triad gang. Swan offers Vincent an illicit world of reward.

Vincent sees this as an opportunity to stand up to xenophobic bogans but by joining the gang Vincent isolates himself from his family. Directors Neil Paddington and Stuart McKenzie use dark, blue lightening in many of the scenes in ‘Chinese Whispers’ to portray the sad, sinister world Vincent is being lured into. This is an effective visual feature because it stresses the consequences of Vincent’s decisions. An example of this is Vincent’s decision to conform to the Triad ways by taking illegal narcotics. Blue lighting is also used when Vincent’s father is sitting in a room lonely and longing for his distant son.

This New Zealand film has made me more aware of the Chinese struggles in New Zealand. ‘Chinese Whispers’ has given me deep insight into the Chinese point of view and the pressures they withstand. It has shown me the importance of being accepting of minorities and their differences. Stuart McKenzie’s and Neil Paddington’s film has also shown me how important it is to end xenophobia and prejudices in order to help people like Vincent Chan to make better decisions to keep a balance between their culture and fitting in to society. All men are dangerous brutes, intruders, vagrants. ”

Haree William’s poem ‘Patches Hide No Scars’ refers to young Maoris, turning their back on the way of their ancestors preferring the “direction, discipline and orders” of gang life. This New Zealand poem has captured the sad truth about the loss of the Maori culture as the lost youths turn to gang membership in a search to add meaning to their lives. ‘Patches Hide No Scars’ relates to the idea of prejudice by describing the members of Maori gangs as one group, a whole, not a group of individuals. How do we prosecute those already punished? How do we fine those lost in the street of no direction? ” Throughout this short text author Haree Williams continually uses words like ‘we’ and ‘those/them’, by doing this the gangs (‘those’) are separated from the rest of society (‘we’). By doing this Maori gangs distance from the rest of New Zealand is emphasized. This poem has raised questions to me: why do these youths find security in the rules and orders of gangs but not the rules and orders of regular jobs or life in the ‘normal’ society?

And what is society doing to make the youngsters of the Maori race feel like they do not belong in society? By reading and viewing these texts, ‘Noughts and Crosses’, ‘Chinese Whispers’, “Patches Hide No Scars’ and ‘On the Sidewalk Bleeding’, I have learnt of the struggles and pressures many people, fictional or not, suffer through due to the prejudices of modern society. “And just like that, I’d been assessed and judged. Nurse Fashoda didn’t know the first thing about me but she’d taken one look at my face and now she reckoned she knew my whole life story. ”

Analysis of Prejudice and Discrimination in Films. (2016, Oct 01). Retrieved from https://studymoose.com/analysis-of-prejudice-and-discrimination-in-films-essay 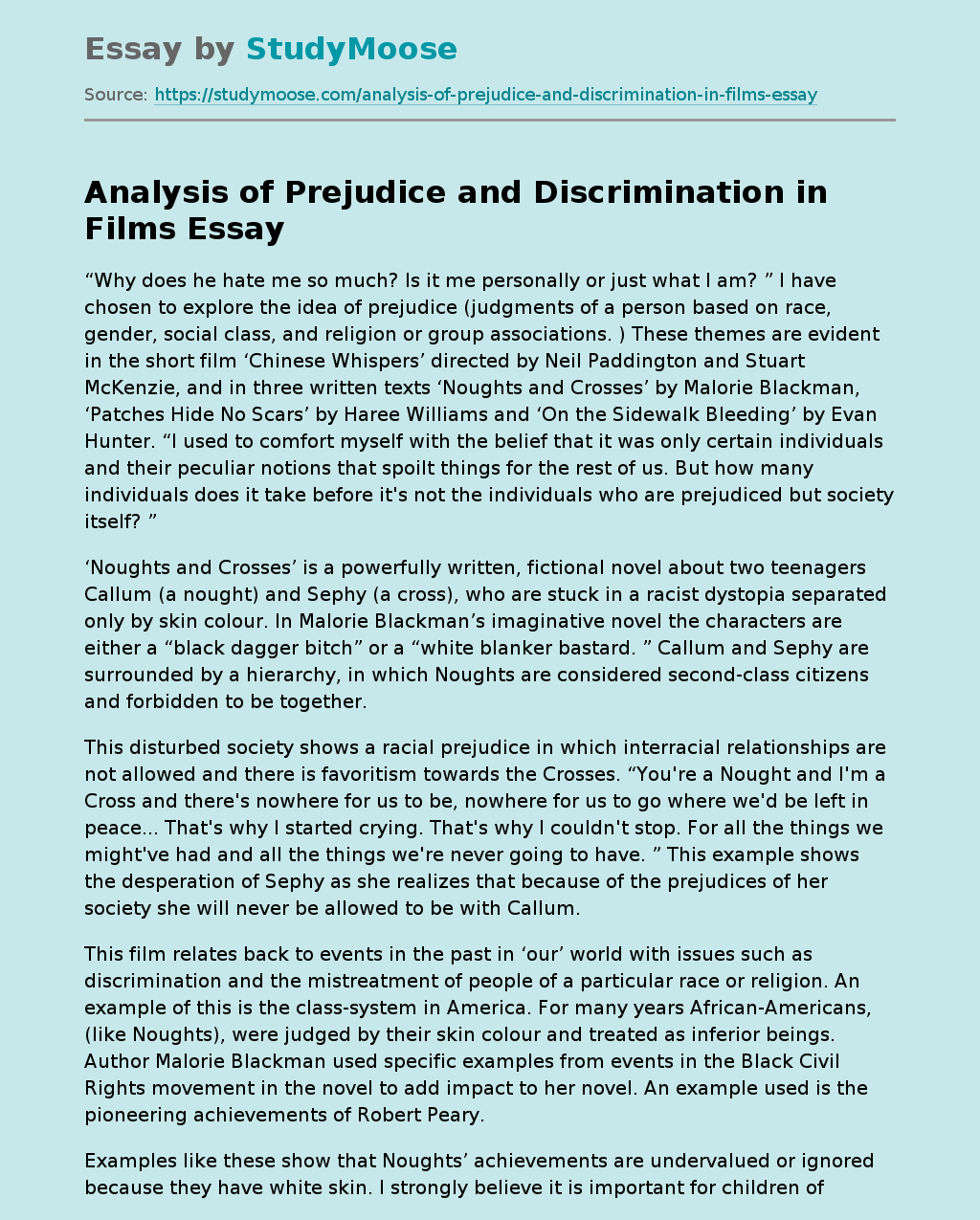