“This is a fear that is inexpressible, incomprehensible to those who have never experienced it, a dread that strikes at the root of one’s survival – an existential fear. ” Experiences suffered by women and children in WWII Japanese POW camps are reflected in John Misto’s play, The Shoe-Horn Sonata. This is shown through a wide range of distinctively visual techniques such as stage directions, language, lighting, music and sound effects that are designed to put the audience in his characters positions.

Don't use plagiarized sources. Get your custom essay on
“ Analysis of Misto’s Play The Shoe-Horn Sonata ”
Get custom paper
NEW! smart matching with writer

The fear confronted by the women of the play can be shown with visual elements of ruthless treatment by the Japanese and betrayal by the British Government. The frightening experiences endured during the women’s imprisonment are visualised in Act 1, Sc. iii, where Sheila is mostly documented. This scene is Bridie and Sheila’s story about how the ship sunk by the Japanese bombing and reflecting the death of many women and children aboard.

At the start of the scene the technique music is used as a soundtrack, “Something to Remember You By” is playing in the background to create a nostalgic mood of the 1940’s which gives the audience a visual moving experience with the song lyrics indicating that someone will be introduced and give the characters a visual way to remember the experiences endured by both of the women.

This technique is therefore enhanced by the dramatic device of an ‘On-Air’ sign which lights up to indicate the audience that Bridie and Sheila are on television and being recorded of what they act.

The technique gives the audience an indication of visualising the rest of the scene. Another technique which John Misto emphasises with recording of Sheila is ellipses. This language technique makes Sheila seem hesitant and cautious of the content she says because it’s public. By Misto creating this technique, Sheila may be ashamed of the experiences and consequences she has endured where she visually remembers. This technique is referenced by, “I … suppose they couldn’t believe it”.

This technique therefore enhanced the audiences understanding of the visually distinctive ways of creating emotive language. John Misto’s main intention in this play was to identify the mostly forgotten women who suffered in the POW camps in Japan during WWII. Misto is very effective in evoking emotion and irony in the audience by reliving the experiences endured by the women in a distinctively visual manner and also by focusing on Act 1, Sc iii where emotion is depicted in various distinctively visual techniques.

This scene evokes the use of the dramatic technique of projected images that are referenced by, “the women and children boarding ships, clutching toys and waving goodbye. It is hard to believe from their happy smiles [… ]”. This quote is further enhanced by the technique irony which Misto visually gives motive that the women and children are soon to die which gives credibility to Bridie and Sheila as this technique reinforces the words spoken by both of the women. 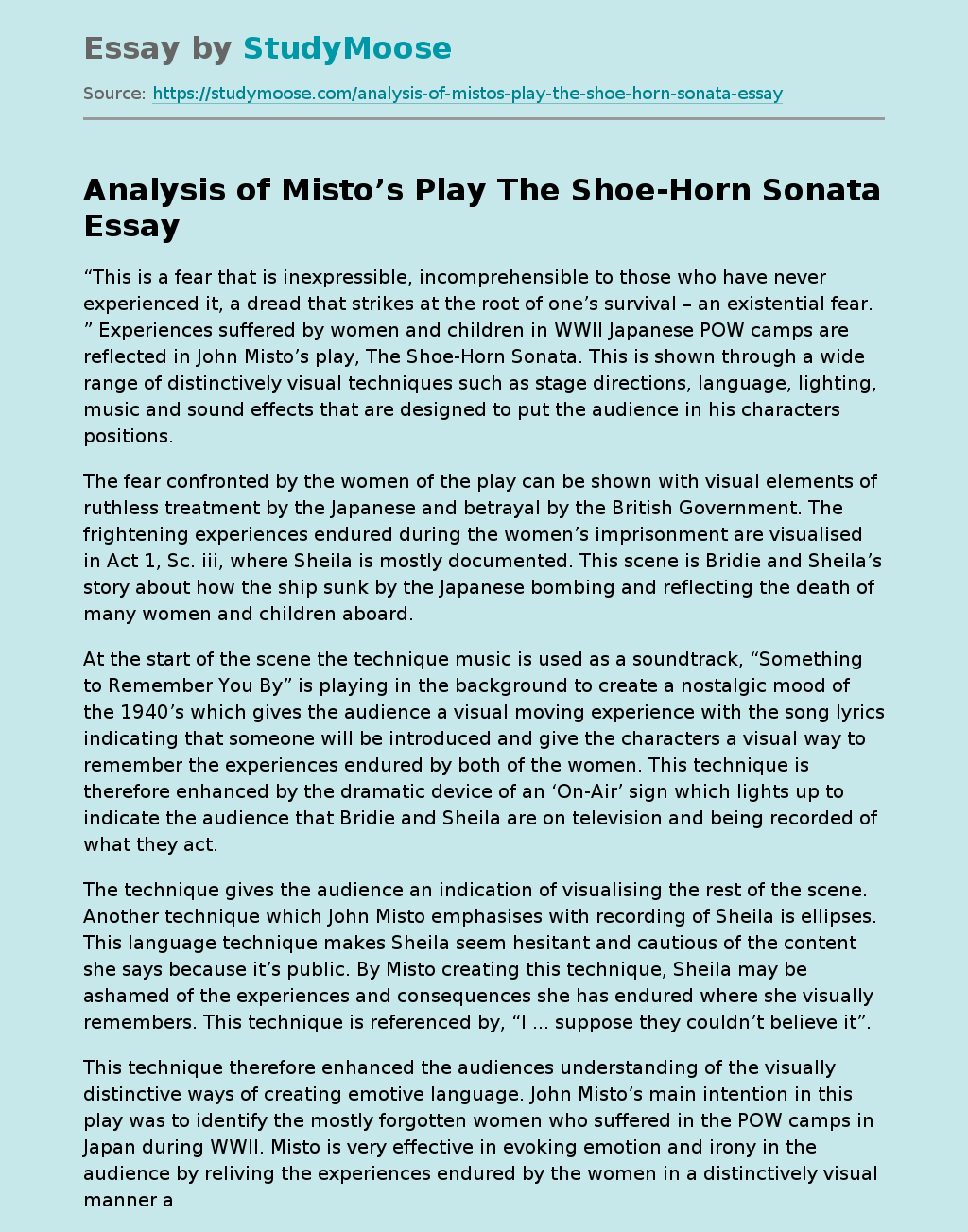