Analysis of Letter From Birmingham Jail by Martin Luther King

Martin Luther King, Jr wrote a letter from Birmingham Jail in August of 1963. At the time, King Jr was detained in the prison as a result of non-violent protesting that occurred while attempting to rectify matters of segregation in the United States of America. The letter was penned as a response to a statement of concern released by eight, white, religious leaders of the South (King, Jr. 1963). The protest was described as untimely and irresponsible, two factors which contribute to the perceived illegality of the protest.

Don't use plagiarized sources. Get your custom essay on
“ Analysis of Letter From Birmingham Jail by Martin Luther King ”
Get custom paper
NEW! smart matching with writer

King, Jr voices exceptions to these elements of protesting. Freedom is seldom given to the oppressed by the oppressor, so, while fighting for equality patience is not indeed a virtue, but a constraint for the timely attainment of desegregation in the United States. Additionally, King, Jr argues for the responsible movement into action. The non-violent demonstration was mindful of the economic and political repercussions, choosing to go forth after the March election and after the Easter shopping period.

Furthermore, constructive tension is described as a necessary asset in the progression of change (King, Jr. 1963).

Martin Luther King, Jr argues that it may be appropriate to disobey laws that are unjust, that a just law is harmonious to the autonomy and integrity of humanity and that unjust laws are morally vicious. Specifically, segregation laws are unjust because they degrade the rights of African-American peoples in the United States. Therefore, it is morally appropriate to violate laws that pertain to segregation.

A recent publication in The Guardian (2019), explored some of the latest instances of peaceful protesting in Australia.

During a protest in the city of Brisbane, 38 animal welfare activists were arrested for obstructing a roadway and resisting police. This issue brought light to other recent protests of Animal rights groups. Several of which had strapped themselves to machinery and trespassed onto the property of five local abattoirs in Victoria. Pertaining to the legality of the protests that have occurred, namely trespassing, resisting police and obstruction of roadway, engaging in these activities is certainly unlawful. However, it can be argued that it is morally unjust to breed and kill animals for the purpose of human consumption, where the animals are not in a position to defend themselves from their oppressors it may best be defended by individuals who are willing and able. Conversely, the attention brought to Veganism and its effect on the livelihood of those who farm these animals and operate the local abattoirs. It is certainly morally unjust to shorthand the economics and autonomy of local business owners who are feeding their families and educating heir children from the profits of these operations.

With great consideration, it is reasonable to deduce that in the instance of non-violent demonstrations defending the rights of farmed animals, that it is not appropriate to break the law. In the context of Martin Luther King, Jr’s letter, trespassing, obstruction of roadway and resisting police are just and morally sound laws. It is not morally permissible to trespass onto the property of others in an attempt to stop their business from operating. Additionally, it is not just to obstruct a roadway where individuals require effective use of roads to adhere to their responsibilities, i.e. getting to work, school and appointments. These responsibilities are of more immediate importance than vegan activism. Veganism and animal rights are a controversial topic, while it is immoral to harm and kill innocent beings for the sake of human consumption, it is long ingrained into human custom to consume animal biproducts for nourishment. Therefore, the choice of a vegan lifestyle remains completely subjective to the individual. Furthermore, other, less demonstrative and disruptive strategies should be considered. Education, campaigning and government regulation are applicable and non-violent strategies can be used to inform the public about animal rights. These strategies are likely to result in highly effective outcomes while avoiding chaos and disorder. Martin Luther King Jr explained that there are some laws that are just based immediate appraisal but are unjust in their application, the current issue in discussion is a pertinent example of such belief (King, Jr, 1963). While it is entirely reasonable to defend the rights of animals, who are not able to do so for themselves, it “ is not however, reasonable to break laws in order to do so. In particular, laws that are governed to adhere to the autonomy of citizens of Australia. 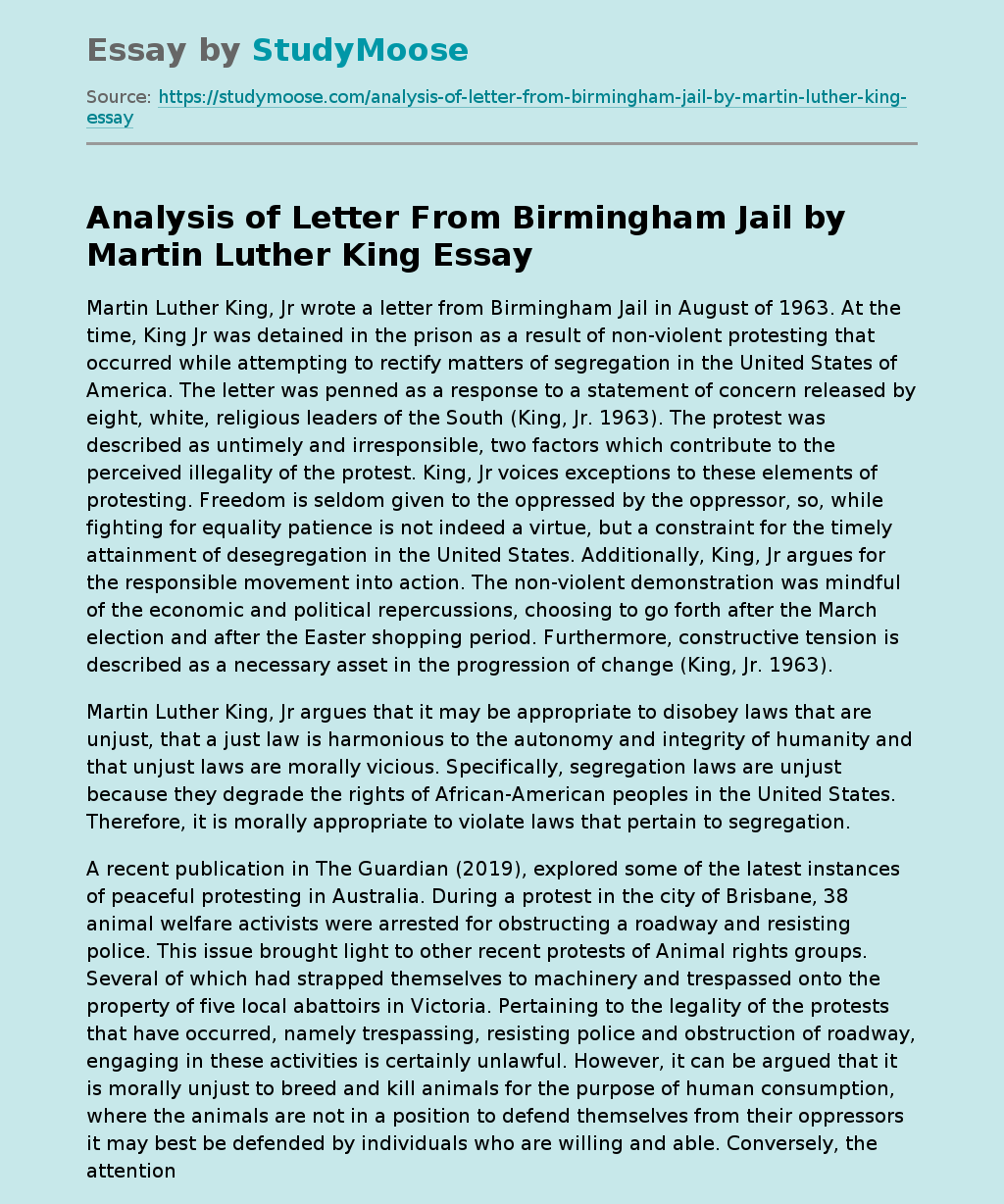