From a personal perspective, the movie means that any person can be a hero as long as he/she desires to become one. Each one can contribute in his/her small way to do noble deeds which can make the world a better place to live in. At first, everybody hated Hancock, and nobody believed that he could be a good guy because of so many misdeeds he has committed. However, it took only one person to appreciate him and his efforts, for him to realize that he can be transformed and become a well-loved superhero in Los Angeles.

Don't use plagiarized sources.
Get Your Custom Essay on Analysis of Hancock Just from $13,9/Page

The movie Hancock is the story of a different kind of superhero portrayed by Will Smith. Hancock is different in that, he becomes both protagonist and antagonist in this film. The main character as antagonist finds a lot of anger inside himself, because although he knew he had superpowers, he could not remember where he came from or how he came to have those powers.

Everybody hates him, and he didn’t really care. All he knew was that he wanted to drink, and that he can help anyone if called upon.

However, his ways were not really well-appreciated by the majority because he didn’t care much if he destroyed properties while conducting his efforts of helping out in the city. Later on in the film, Hancock becomes the protagonist as he is transformed into a super-hero by Ray, the only man who believed that he could still become the superhero that he was meant to be. Some twists in the plot are revealed later on though which shows that Ray’s wife Mary is actually Hancock’s wife from 80 years ago.

The conflict in the story exists within the character of Hancock, which was effectively portrayed by Will Smith. The initial portion of the story shows the typical conflict of ‘Man against society’ where Hancock was hated by the people of Los Angeles. Later on in the film, the ‘Man against man’ conflict is depicted when the prisoners in the institution who were put in jail by Hancock, gang up on him seeking revenge. Another instance of ‘man against man’ conflict is exemplified by Hancock having a physical battle with his wife as he sought to get answers to questions about his past.

And then of course, the conflict of ‘man against himself’ is shown during the time when Hancock was drowning himself in alcohol because he felt helpless not knowing anything about his past. The foreshadowing element is efficiently used in this movie with the meaningful glances taking place between Mary and Hancock, who, as the movie unfolds, are actually husband and wife from centuries past. Hancock’s epiphany comes at the moment he gets to kiss Mary after tucking in the drunk Ray in his bed, because Mary reacts violently, thus revealing that she had super powers just like him.

There are also a lot of dialogues delivered by Mary connoting dramatic irony, but which only leaves Hancock all the more puzzled about his past and Mary’s peculiar reaction towards him. The climax comes when the lives of both John and Mary are put in grave danger as they are both badly hurt and are showing their vulnerable sides because of their proximity to each other. This leads to a falling action as John leaves the scene resulting to the denouement as he continues to keep away from his wife so that they could still both retain their lives, power and immortality.

The major theme in the movie is parallel to the Spiderman quote: “with great power comes great responsibility”. For Mary and John Hancock, being together means losing their powers and eventually becoming mortals, hence their decided preference of being separated from each other. Upon becoming a superhero, Hancock learned that he could have more significance in the world by helping out those in need, and he had to make a choice of either staying close to his loved one, Mary, and eventually becoming more vulnerable and less a hero, or keeping away from her and continuing his mission.

He preferred the latter, hence, it meant giving up on his love for her, and allowing her to stay with Ray. Nevertheless, since they were immortals, it is not impossible for them to decide to stay with each other and become mortals later on in their lives, once they get fed up with their superhero existence. Some minor themes also depicted in the film are: 1) good always triumphs over evil; 2) ugly duckling transforms into a beautiful swan; and 3) the fairy godmother (portrayed by Ray) who repackages Hancock to become a superhero (Wordsmith, 2008).

The moral lesson of the movie is that change is possible as long as there is someone who believes that it is. This is shown in the way that Ray believed in John Hancock, who, at first was just a bum with superpowers. Just because he wanted to return the favor of John saving his life, Ray offered his services so that John could be transformed, to kind of repackage John’s personality so that he can be a genuine superhero that the citizens of Los Angeles will respect and regard highly.

Although there are some critics who say that “this superhero movie had no morals and therefore slipped and fell most of the way through” (Riley, 2008), somehow, the hero’s actuations were justifiable because of his amnesia which deleted much of his past memories. It is interesting to note however is that one review refers to Hancock as a metaphorical representation of the United States – “ultimately America should go away for awhile… and we just stow away in a dark corner” (Coll, 2008).

Several other things are alluded to which refer to the same metaphor like: 1) Hancock’s symbol which is an eagle; 2) Hancock’s “Pass” participation in the anger management prison meetings, said to be parallel to US participation at the UN; and 3) the name John Hancock which is synonymous to the US Declaration of Independence (Coll, 2008). The point of this movie is that there is a hero in each person, and it only takes one believer to make this hero come out.

The film caters to the emotional side of the viewer by creating the love triangle between John Hancock, his wife from way back, Mary, and Ray, his newfound friend. I personally felt that this movie is meaningful because indeed, there are a lot of ways by which one person can make a difference – as exemplified by the way Ray made a difference in John Hancock’s life. The same was also emphasized during the time that Hancock was imprisoned and the incidence of crimes rose, meaning that despite his bad traits Hancock also made a significant contribution to taking the bad guys off the streets.

I feel that I can make a difference in the world by following my passion, caring for my fellowmen and trying to see the good in others. I will try to emulate the way Ray saw Hancock – to see beyond what is physical, not be biased or discriminatory, not let hatred or jealousy get the better of me, and make the most out of my existence. In this manner, I know that I can contribute to making the world a better place to live in. 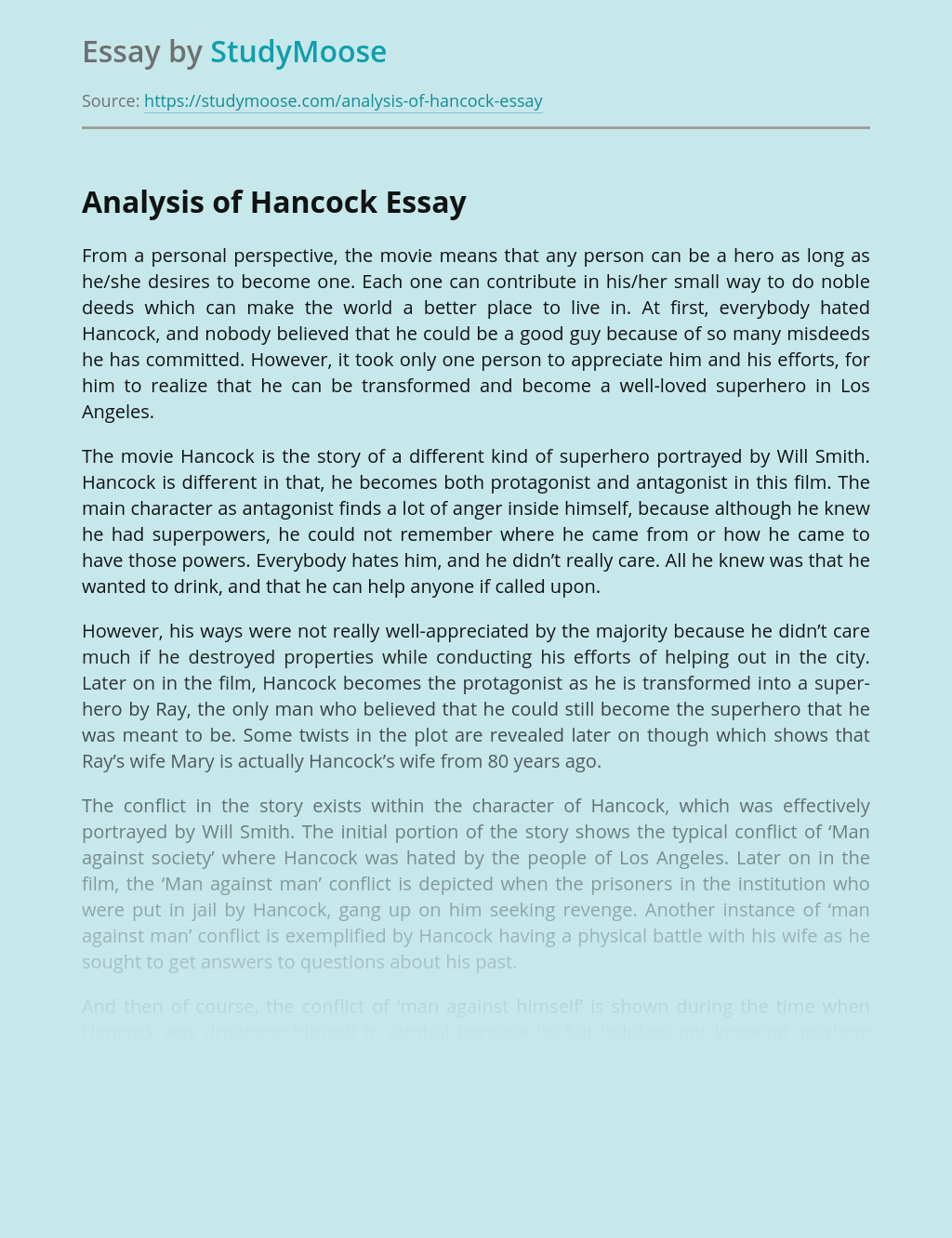 What is equality? Equality is not something that a government can grant or deny a body of citizens; for this right is unalienable. This basically included life, liberty, and the pursuit of happiness and was not allowed to be taken away by governments. It could be utilized to describe the same political rights that people...

FINANCIAL STATEMENT ANALYSIS1.0 LIQUIDITY RATIOSLiquidity ratios measure the extent to which a firm has adequate cash flows or liquid assets. 1.1 Current Ratio Current ratios is one seeks to look at the firm’s assets that are relatively liquid in nature and match them to the short-term liabilities of the firm. Current assetsCurrent ratio = Current...

On 10th of March, 1876 Alexander Graham Bell transmitted the first speech using electricity. From that day forward, the telephone system changed every aspect of life. Although it did not immediately change the world, it set communication on a path that would change the future of communication. Mobile phones appeared in the early 1980’s and...

Resistance Against Antibiotic Resistance Due to their widespread use as medical interventions to combat infections caused by bacteria in both animals and plants, the negative impacts of antibiotics have become increasingly pronounced on a global scale. Bacterial resistance to antibiotics is a prominent issue, as they are the common solution to fighting off infections in...

Coming out of the Age of Enlightenment, Europeans were filled with new ideas regarding economics. Grouped with those ideas was a desire to increase production and innovation. This is what ushered in the Industrial Revolution, a rapid development of industry in Britain in the 18th and 19th centuries. From the beginning of the revolution in...