Analysis of Fitzgerald Essay: the Crack-Up

“A Process of Breaking Down” Julia Greenburger 1/9/13 The Crack up, an essay by F. Scott Fitzgerald, is an elaborate description and analysis of the mental break down the author experienced and the depths of its causes. After a life of struggling to succeed and failing multiple times, he suddenly reconsiders why he needs to succeed at all and whether it is what he really wants. Fitzgerald’s breaking down was a process of losing all of his values by realizing that things, people and all aspects of life that he once adored were adopted from others.

Don't use plagiarized sources. Get your custom essay on
“ Analysis of Fitzgerald Essay: the Crack-Up ”
Get custom paper
NEW! smart matching with writer

In his newfound perspective these things held no true value for him. Finally, he no longer loved anything so he had no obligation to pretend he did, translating into a cold-­hearted man who was not to do anything if not for himself. Fitzgerald, after a few pages of mystery, describes the cause of his mental illness as a lack of self, in which he has no original concepts of success.

He’d been bound to social expectations such as “how to do, what to say” (7) which didn’t directly profit him yet he struggled so tirelessly to achieve.

He underwent these struggles and social norms in order to achieve “another man(‘s)… sense of the ‘good life’”. (6) These superficial goals were impossible for him to accomplish, though he was determined to do so, therefore they broke him down. Once he noticed that he’d put so much work toward such adopted “needs”, “there was not an ‘I’ anymore -­-­ not a basis on which I could organize my self-­respect -­-­ save my limitless capacity for toil that it seemed I possessed no more.

” (7) He was left without notions he could believe he’d created himself. The only thing he had left to hold onto of himself was his hard-­working persona, though it had been in many ways utilized in a non self-­profiting manner. After a long period of isolation in which he was disgusted with his old values, he decided to separate himself completely from them. He would engineer a “clean break”, abandoning all efforts that did not benefit him directly.

In his new philosophy “Since [he] could no longer fulfill the obligations that life had set for [him] or that [he] had set for [himself], why not slay the empty shell who had been posturing at it for four years?… [He] would cease any attempts to be a person -­-­ to be kind, just, or generous. ” (9) Thus, he continued his life working hard toward what would profit only him.

Though he abandoned the necessities he had for superficial success, he adopted an entirely selfish life style that might have led to further unhappiness. Fitzgerald’s self evolution exhibited a rare process in people in which he was able to detach himself from the unimportant and achievable by redefining his values. Though this helped him surpass his sense of a failure, he was unable to do so without becoming completely introverted.

Analysis of Fitzgerald Essay: the Crack-Up. (2016, Nov 26). Retrieved from https://studymoose.com/analysis-of-fitzgerald-essay-the-crack-up-essay 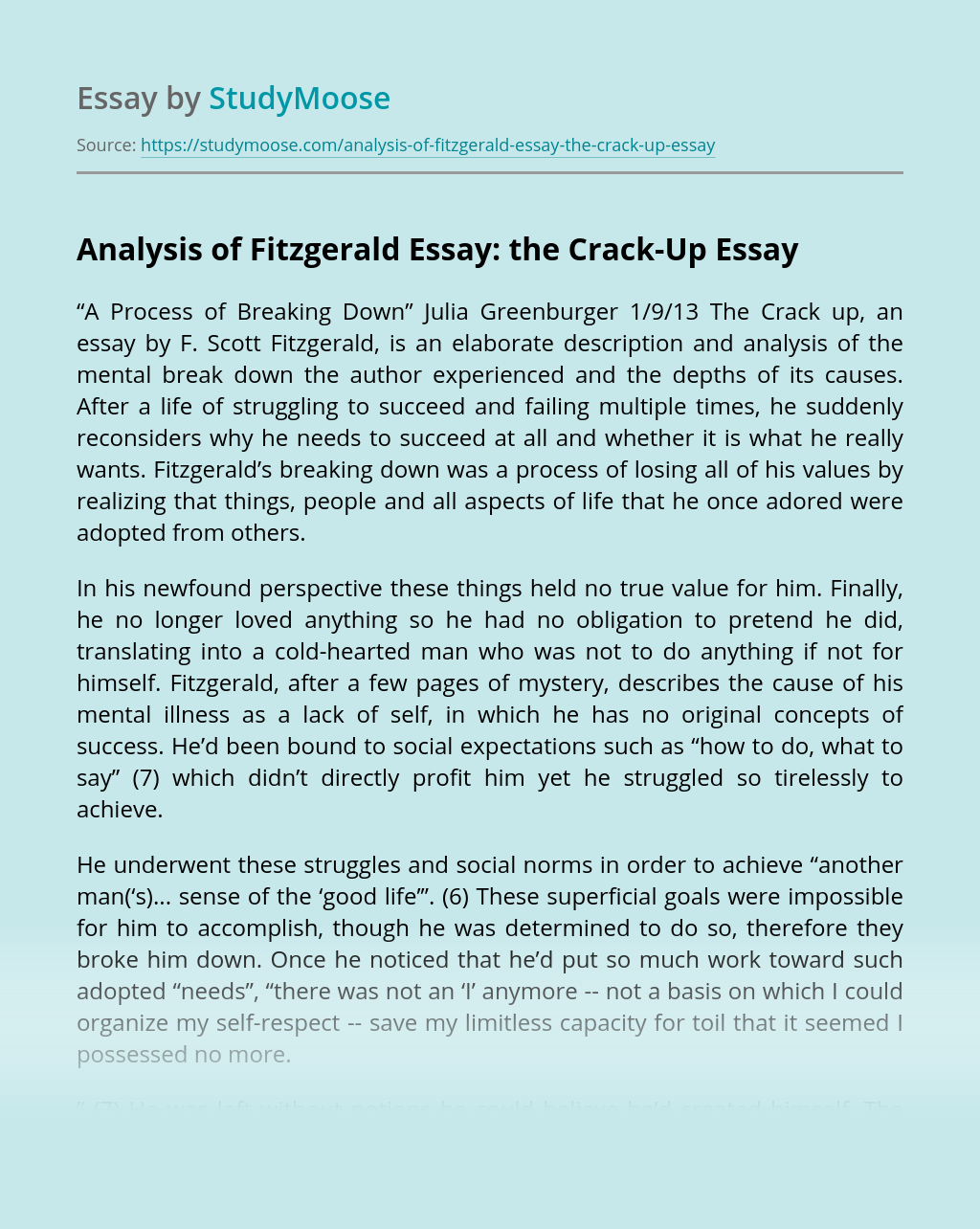