This essay provides a general view of the two pragmatic principles as well as euphemisms, and tries to work out the relations among them by specific analysis of conversational examples.

Don't use plagiarized sources. Get your custom essay on
“ Analysis of Euphemism from the Perspective of Cooperative Principle and Politeness Principle ”
Get custom paper
NEW! smart matching with writer

[Key Words]: Euphemism; Cooperative Principle; Politeness Principle 1. Introduction: Paul Grice proposed the Cooperative Principle to demonstrate a series of maxims one has to observe to achieve efficient communication. Generally speaking, the principle requires speaking sincerely, relevantly and clearly, while at the same time providing sufficient information when conversing with others.

In real life, however, a person at some time or other tends to violate the above principle.

For instance, an official will possibly talk about some other unrelated issue when he is challenged a question in an interview to avoid his embarrassment. In order to maintain desirable social relationships, human beings prefer more indirect expressions or rather choose more euphemistic expressions. A euphemism is a word or phrase that is harmless or sounds pleasing which replaces a direct, rude utterance.

In the Oxford Advanced Learner’s Dictionary, “euphemism” is defined as “an example of the use of pleasant, mild, or indirect phrases in place of more accurate or direct ones”.

In English, for example, “pass away”, “breathe one’s last”, “decease” are euphemistic alternatives for “death”. Why, then, do people bother to use these indirect expressions during communication? Leech suggests that it is out of consideration of politeness that people choose different pragmatic strategies to obey or violate CP. Leech’s Politeness Principle therefore deals with a series of maxims one has to follow to achieve politeness.

These two principles, in a sense, are mutually complementary for each other. This essay aims to illustrate the functions of euphemisms by means of analyzing the relations between the two principles, thus demonstrating how to appropriately use euphemisms given different situations. 2. Demonstration 2. 1 Overviews of relevant concepts 2. 1. 1 Euphemisms The word Euphemism is derived from Greek words. The morpheme “eu-” means “good” while that of “-pheme” means “word” or “speech”, therefore the whole word “euphemism” means “to speak favorably” or “good speech”.

A euphemism, as its origin suggests, is a mild or vague periphrastic expression as a substitute for blunt precision of disagreeable truth. The functions of euphemisms are various and complex as they touches almost every aspect of our social life. Generally speaking, evasive function, politeness function, and cosmetic function are among the most important. This essay, however, will focus on politeness function, that is, the function to avoid irreverence and discourtesy in communication. 2. 1. 2 Cooperative Principle

To accomplish efficient and successful communication, people are often cooperative in their cooperation. Based on this general view, H. P. Grice, an American linguistic philosopher, said, “Our talk exchanges do not normally consist of a succession of disconnected remarks, and would not be rational if they did. They are characteristically, to some degree at least, cooperative efforts; and each participant recognizes in them, to some extent, a common purpose or a set of purposes, or at least a mutually accepted direction. A successful conversation, as Grice suggested, comes from the common efforts made by the participants involved in communication. Grice identifies as guidelines to successful conversation four basic maxims underlying the Cooperative Principle: The maxim of quantity: 1) Make your contribution as informative as is required. 2) Do not make your contribution more informative than is required. The maxim of quality: Try to make your contribution one that is true. 1) Do not say what you believe to be false. 2) Do not say that for which you lack adequate evidence

The maxim of relation: Be relevant. The maxim of manner: Be perspicuous. 1) Avoid obscurity of expression. 2) Avoid ambiguity. 3) Be brief (avoid unnecessary prolixity). 4) Be orderly. 2. 1. 3 Politeness Principle Politeness is usually regarded as manifestation of human civilization as well as one of the most effective strategies modulating interpersonal relationship in human communication. The definition of Politeness Principle in language study could be the following: “(1) how languages express the social distance between speakers and their different role relations. 2) How face works; that is, the attempt to establish, maintain, and save face is carried out in a speech community. ” G. Leech defines politeness as forms of behavior that establish and maintain comity. That is the ability of participants in a social interaction to engage in interaction in an atmosphere of relative harmony. He developed the Politeness Principle with six maxims as follows: 1. Tact maxim Minimize cost to others and maximize benefit to other. 2. The Generosity maxim Minimize benefit to self and maximize cost to self. 3.

However, Leech considered that “the CP in itself is not sufficient to explain ‘(1) why people are often so indirect in conveying what they mean; and (2) what is the relation between sense and force when non-declarative types of sentences are being considered. ’” Leech looks on politeness as the crucial in accounting for why people are so often indirect in conveying what they mean. He thus puts forward PP so as to rescue the CP in the sense that PP can satisfactorily explain exception to and apparent deviations from the CP.

In other words, Cooperative Principle and Politeness Principle are mutually complementary. 2. 3 The politeness function of euphemisms by means of violating the CP 2. 3. 1 Violating the Maxim of Quality According to the maxim of quantity, a speaker is supposed to provide as adequate information as required. However, in real social interactions, people tend to provide insufficient amount of information, thus conveying implied meaning. For instance: Willy: Howard, are you firing me? Howard: I think you need a good long rest. Willy. It is obvious that instead of the direct answer of “Yes, I’m firing you. Howard adopts a more euphemistic reply. The reply does not provide the right amount of information required by Willy whereas avoids the emotional embarrassment to Willy that may arise of a direct answer. In other words, Howard’s tactful and subtle answer follows the Tact Maxim at the cost of violating the Maxim of Quantity. 2. 3. 2 Violating the Maxim of Quality A euphemism possesses the essential characteristic of violating the Maxim of Quality. It either overstates the fact or understates the original defects or deficiencies.

However, words inconsistent with the truth are inevitable so as to maintain politeness and minimize the possibility of face-threatening to others. This is well illustrated in the following conversation. A: What do you think of Jack? B: He is a good friend. He always keeps an eye on my pocket. Clearly, B is flouting the Maxim of Quality by saying something s/he believes to be false. It is known to both A and B that contrary to what is literally said, B in effect doesn’t have a liking for Jack. Nonetheless, such euphemistic expression helps save face of the third party Jack, thus observing the Generosity Maxim. . 3. 3 Violating the Maxim of Manner The Maxim of Manner requires clearness and straightforwardness in communication, quite the contrary; euphemisms are vague or obscure words and even go far as to ameliorating prerogative remarks. For instance, a teacher says to a parent, “He is a little bit slow for his age. ” He implies that the child is obtuse. Such a word as “obtuse” does not match a teacher’s psychological as well as educational literacy. Besides, it is considered rude to speak ill of a child in front of the parents. It is common to be ambiguous in the remarks about others, especially the bad ones. ) He has difficulty distinguishing between imaginary and factual information. (He lies. ) 2) He needs help in learning to adhere to rules and standards of fair play. (He cheats. ) 3) He needs help in learning to respect the property rights of others. (He steals. ) These expressions are the result of careful selection of communication strategies. Although flouting the Maxim of Manner, they observe the Approbation Maxim. 3. Conclusion Cooperative Principle and Politeness Principle are mutually complementary; consequently, the violation of one necessarily leads to the conformity to the other.

Analysis of Euphemism from the Perspective of Cooperative Principle and Politeness Principle. (2018, Nov 05). Retrieved from https://studymoose.com/analysis-of-euphemism-from-the-perspective-of-cooperative-principle-and-politeness-principle-essay 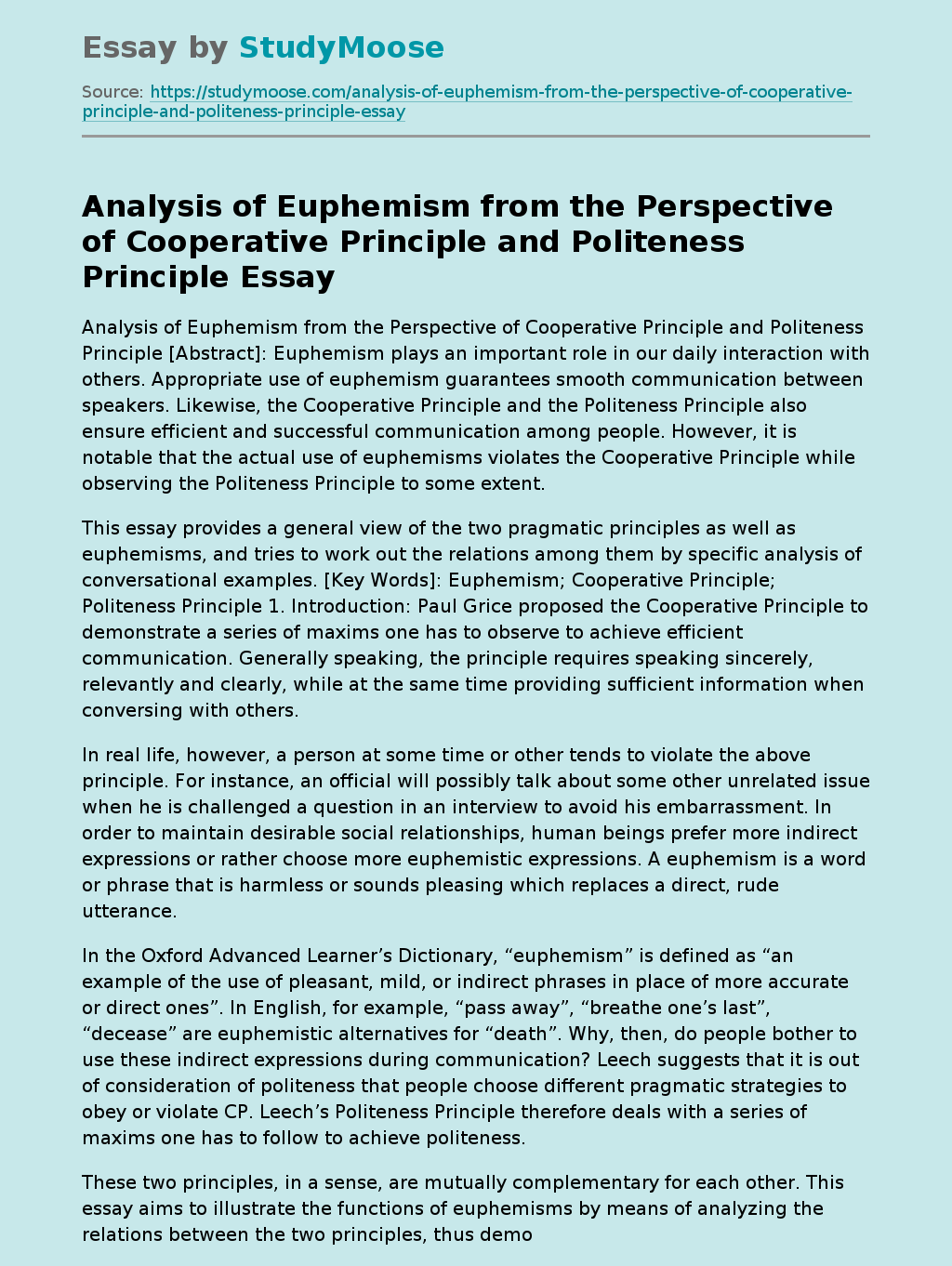